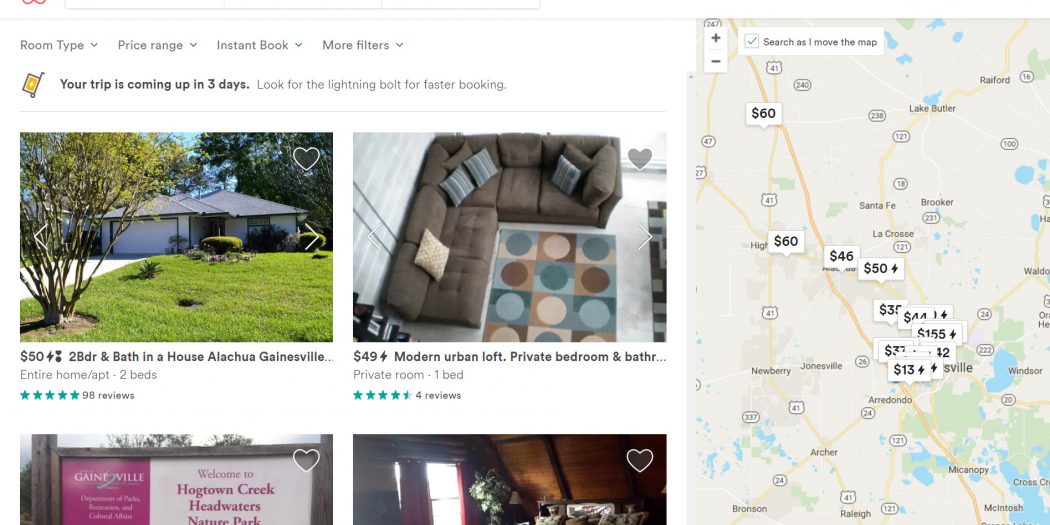 What Tax Will Airbnb Pay To Alachua County?

Thousands of dollars worth of possible tax revenue are on the table in Alachua County as Airbnb works out a deal with the county for the collection of tourist development tax, also known as bed tax.

Airbnb spokesman Benjamin Breit said Alachua County’s Airbnb hosts received $1.5 million dollars worth of supplemental income in 2016, which could have meant up to $75,000 worth of tax income for the community. That’s calculated by multiplying the county bed tax ordinance of 5 percent imposed on any lodging rental of six months or less.

“How often does a county or city just generate new revenue all of a sudden without having to raise taxes?” Breit said. “That’s what we’re talking about here.”

Breit said county tax collectors throughout Florida are suspicious when Airbnb approaches them with the tax contract.

“They’ll say, ‘What’s the catch here?’ And there is none. We want to help them get this money. It’s part of our overall mission to be a good partner to local governments.”

In April, the New York Times published the 2017 rental strategy from the American Hotel and Lodging Association that accused Airbnb of operating a lodging industry without following the same tax rules as hotels do. The Times’ article states the association will lobby politicians and state attorneys to highlight how Airbnb hosts are “dodging” bed taxes.

“We’ve got bed tax deals in 38 Florida counties and want to get them done in all 67,” Breit said. “Anyone who is alleging that Airbnb and their hosts don’t want to pay their fair share in Florida doesn’t know what they’re talking about.”

John Pricher, spokesman for the Alachua County Hospitality Council, said Airbnb is not part of the council, which includes hotels like Days Inn and Hampton as members, because it doesn’t comply with the same rules as the hotels.

“Once the tax collector reaches the agreement with Airbnb, it would be open to them as well. Currently, they’re not participating in it,” Pricher said.

“It’s not negotiable. They cannot negotiate the tax. The ordinance is the ordinance, and everyone pays the same rate.”

Power said Airbnb agreed to the 5 percent tax going forward, but the company does not want to pay the past taxes it owes since starting operations in Alachua County.

“When Airbnb comes forward and said, ‘We’ll pay if you agree to these items,’ (our office’s) attorney said, ‘Legally, John, you can’t sign this. You can’t waive your right to back taxes.’ I don’t have that authority.”

The Alachua County tax collector’s office planned to send Airbnb a restructured contract in late April and await its response.

Daniela is a reporter for WUFT News and can be contacted by calling 352-392-6397 or emailing news@wuft.org.
Previous U.S. Rep. Ted Yoho Explains His Vote For American Health Care Act
Next Florida Legislature Passes Bill to Strengthen Stand Your Ground Law