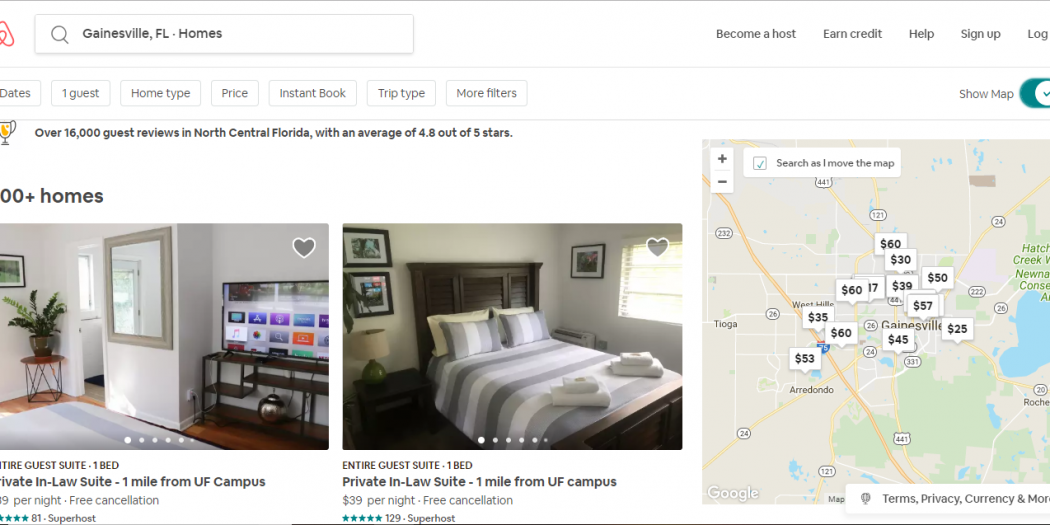 After two years of negotiations, Alachua County is on the brink of agreeing on a deal that would allow Airbnb to collect the county’s bed tax for its hosts.

The bed tax is a 5%, county-imposed tax levied on guests staying in the area that applies to any short-term rental of a living space. Airbnb rentals fall under this umbrella.

However, according to Assistant County Manager Gina Peebles, Airbnb hosts have not been paying this tax, unlike local hotels and motels.

Tom Martinelli, head of public policy for Airbnb in Florida, said that the hosts who don’t pay the tax often don’t do so because they either don’t know the tax exists or don’t know how to remit the tax.

“Taxes are an extremely, extremely complicated thing,” he said. “I think I’m a pretty smart guy, but when it comes down to doing my taxes, I rely on a professional.”

He said that this is the reason that Airbnb wants to be able to collect the taxes for the hosts. That way hosts aren’t accidentally skimping on taxes, the county isn’t missing out on tax money and Airbnb stays in the good graces of the county.

However, it has taken a while for the county and Airbnb to agree on the terms of a deal. Chief Deputy Tax Collector Jon Costabile said that Airbnb first reached out to the county in June 2016, but their original offer was a nonstarter.

Costabile said that the most glaring issues with the original deal were the county’s inability to accurately audit the hosts and Airbnb’s insistence on the county waving all back taxes for its hosts.

Peebles stressed that it was imperative that the county be able to properly audit the taxes being remitted to ensure Airbnb was paying the full amount for its hosts.

Under the current terms of the agreement, Costabile is happy with what information will be given to the tax collector’s office, he said.

As for the issue of back taxes, he said that the final agreement will leave hosts responsible for paying back tax money not remitted in years past. Airbnb will only take responsibility for all bed tax money moving forward.

“There’s no way we can sign that right away, at least in my opinion,” Costabile said. “That would be not fair to the other hotels and everyone else who’s been playing by the rules, so to speak.”

The information provided through the audits will not include things like names and addresses, meaning the county won’t be able to use the audit information to target hosts and demand back taxes, Costabile said. His office usually relies on things like tips to find people who owe tax money.

He said that while he is happy the county is finally on the brink of striking a deal, negotiations might have been over weeks ago if not for Airbnb misspelling his name and sending emails to the wrong address.

“My name is sort of odd, it’s Costabile and not Constable and they keep putting an ‘n’ in my name and it’s not going to my email so I didn’t get it,” he said. “Gina [Peebles] called me and was like ‘how’s the audit issue going?’ and I said ‘I don’t know, what are you talking about? I haven’t received anything.’”

In order for the deal negotiated between the county and Airbnb to go into effect, the Alachua County Board of Commissioners must formally vote on the deal. The bed tax is a commission-imposed tax, so the commission is ultimately responsible for any deals relating to the tax, Peebles said.

Peebles said she expects to bring the deal before the commission for a vote sometime in July or August. The deal would take effect immediately if the commissioners accept it.

Leon County made a similar bed tax deal with Airbnb a year ago, and Peebles said it was their deal that Alachua County based their negotiations off of since the two counties are similar in population size.

Martinelli said that this bed tax money will go straight to the county. He said that many of the other counties Airbnb negotiated with thought that the deal would be too good to be true, but he assures them that it’s not.

“I think local governments aren’t used to private companies coming in and saying ‘hi, here’s all this tax money, please take it,’” he said.

All that’s left to do now is stage one final meeting between county representatives and Airbnb to work on the final details of the deal, Peebles said. Then, the majority of county commissioners need to approve of the staff’s deal sometime in July or August.

She said that while she expects the commissioners to say yes, she’s not ready to get her hopes up too high, as any flaw the board sees in the deal can bring everybody back to the negotiating table.

Matthew is a reporter for WUFT News and Fresh Take Florida who can be reached by calling 786-332-8003 or emailing marrojas@ufl.edu.
Previous Anti-Confederate Protesters Disrupt Independence Day Celebration In St. Augustine
Next 50 Days In Office: Q&A with Gainesville City Commissioner Gigi Simmons