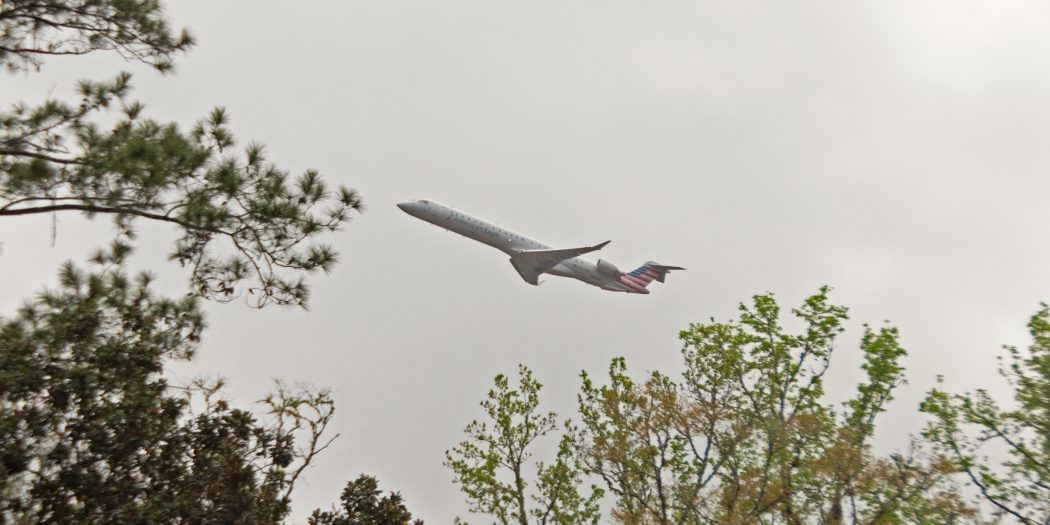 A plane takes off last week from Gainesville Regional Airport. Many animals can be seen in the wooded area on the other side of the fence from the runway, and more than two dozen of them were reportedly struck by planes in 2018. (Sam Schaffer/WUFT News)

A vulture carcass hangs from a radio beacon on the runway at the Gainesville Regional Airport. It serves as a warning; birds beware.

There were 26 reports of animals being hit by planes at Gainesville Regional Airport (GNV) in 2018, the most recent complete year of data in the Federal Aviation Administration Wildlife Strike Database.

The database is where all of the reported strike data can be found for instances of animals being hit by planes in the United States.

An important caveat: The database does note that it can be misleading to compare airports because the data depends on the honesty of the reporting airport.

Airports are not required to report animal strikes, said Shaun Blevins, airport operations manager at GNV. Airport staff say they are diligent about reporting every strike.

Caveats notwithstanding, the Gainesville Regional Airport is in a prime location for planes coming and going to hit animals. On any given day, dozens of wild turkey, deer and other animals can be seen lurking throughout the woods near the runway.

There is a fence that completely encloses the runway area to keep out large animals, but it’s ineffective when it comes to flying birds, Blevins said.

It takes a multifaceted approach to try to keep birds out of harm’s way.

Airport workers inspect the runway for safety issues at least three times a day, Blevins said. They look for cracks, pebbles, and any other safety issue on the runway.

They deal with birds on the runway in a few different ways, Blevins said. They collect the blood, snarge and carcasses from dead birds and bury them. Live birds are dealt with by means of starter pistol or propane cannon, as the noise typically scares them away.

Blevins said there was an issue a decade ago with vultures — high-ranking birds as far as damage goes — hanging out on the VHF Omnidirectional Range radio beacon, a building-like structure that pilots use to help them navigate to the airport.

The airport in 2011 purchased a vulture carcass from the FAA, had it stuffed and hung it on the beacon. They replace the carcass once a year.

The vultures haven’t been back since that practice began, Blevins said.

There are other preventative measures in place, too.

The airport keeps the grass around the runway between six and 12 inches, he said. Let it grow too long, and rodents will seek refuge and attract birds of prey. Too short, and small birds feel comfortable landing on it because they can see each other.

Airport management also got rid of abandoned pavement on either side of the runway. Mourning doves eat pebbles to help with their digestion and were gathering on the extra runway space for that reason. The mourning doves left, Blevins said, when the concrete did.

He said the efforts have been effective, and the FAA database supports his assertion. The number of animal strikes at GNV has been trending downward over the past five years, even as total number of flights into and out of the airport has trended upward since 2014.

Sam is a reporter for WUFT News who can be reached by calling 352-392-6397 or emailing news@wuft.org.
Previous The Point, Feb. 24, 2020: Florida Legislature Works To Ban Shark Fin Sales
Next New Law To Ensure All Florida Officers Are Allowed To Park Marked Cars At Home