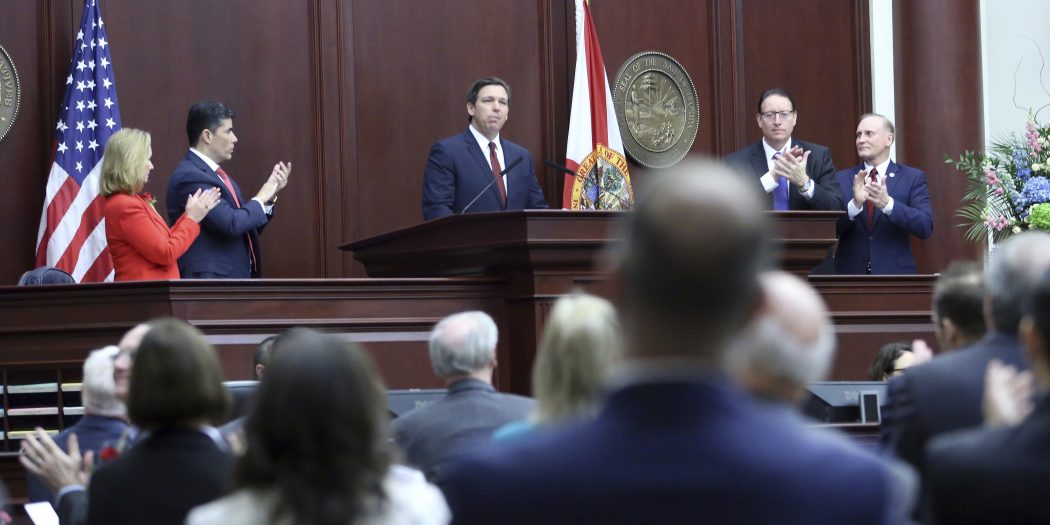 Gov. Ron DeSantis, center, is applauded during his state of the state address to a joint session on Tuesday Jan. 14, 2020, in Tallahassee, Fla. (AP Photo/Steve Cannon)

Entering the second year of his four-year term, the Republican governor endorsed the same conservative themes he has discussed for weeks ahead of the legislative session, which started Tuesday.

Overshadowing the work ahead of the Republican-led House and Senate was the upcoming presidential election, when DeSantis hopes to deliver Florida as a key battleground state for President Donald Trump. Many state lawmakers themselves face re-election in November, too.

Less controversially, DeSantis praised continuing efforts to kill Burmese Pythons in the Everglades. The governor called them “voracious predators” and praised two python hunters from southwest Florida, Geoff and Robbie Roestorff, who were visiting the Capitol for his annual State of the State speech.

DeSantis has proposed spending $900 million to raise the salaries of new teachers and give bonuses to some teachers and principals.

“This will make it easier to get talented college graduates to enter the profession and will help us retain many of the good teachers we have now,” DeSantis said.

Republican lawmakers have expressed skepticism about whether Florida can afford open-ended commitments to spend so much, as Democrats have proposed across-the-board raises for Florida’s roughly 177,000 teachers plus support workers, such as cafeteria employees and bus drivers.

The governor also urged the Legislature to require businesses to use the federal E-verify system to check the immigration status of new employees, even as Republican legislative leaders have indicated prospects were dim. Reducing legal and illegal immigration has been a platform of the Trump administration and its supporters.

“Lower-income workers also shouldn’t have their wages depressed by cheap foreign labor,” DeSantis said. “Assuring a legal workforce through E-verify will be good for the rule of law, protect taxpayers, and place an upward pressure on the wages of Floridians who work in blue collar jobs.”

The DeSantis administration is replacing the Common Core curriculum in public schools that has raised consternation among some parents.

“When even parents with advanced degrees can’t understand their kids’ math homework, we have a problem,” DeSantis said. “I can reveal that one key to our replacement of Common Core will be a renewed emphasis on American civics and the U.S. Constitution.”

On healthcare, DeSantis praised what he described as Trump’s efforts to allow access to more affordable prescription drugs from Canada. He also recognized the need for more transparent pricing and reducing healthcare costs as priorities for lawmakers.

“Common items like gauze, IV bags and needles will be charged to you at sometimes hundreds of times their original cost,” he said. “And should you fail to pay, you will find yourself among the millions of Americans who have been made bankrupt as a result of exorbitant medical bills.”

“We need to make sure that the cost of prescription drugs is actually lowered, and we shouldn’t have to rely on Canadian imports,” she said.

DeSantis also commended the state for its highly regarded public universities, low unemployment and low crime rates. He said “toil and sweat” await Republican and Democratic lawmakers over the next 60 days.

The Legislature was expected to complete its work on March 13.