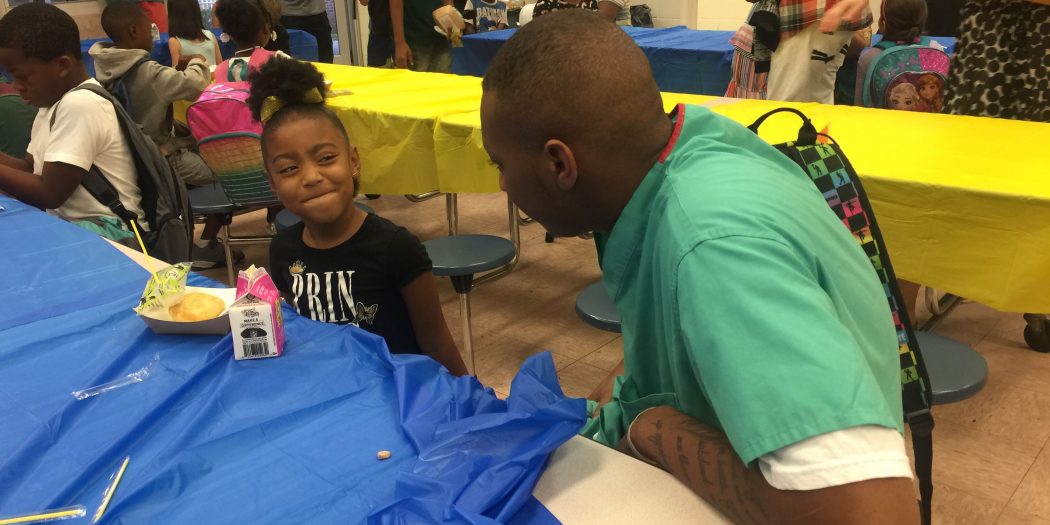 David Franklin stares at his niece Ariah as she gives him a questioning look. Franklin said he wants her to get a good education, so she can achieve great things in life. (Dana Bryan/WUFT News)

At 7:15 a.m., about 300 fathers or father figures sat down in the school’s cafeteria to have breakfast with their children on “Dads Take Your Child to School Day.”

Stephen Sangster, father of 5-year-old Ezekiel, is a graduate student studying chemistry. He said he considers moments like this truly special because of his normally busy schedule.

“It’s good for children to know that their parents, dads especially, are involved in their education and care about taking time to be with them,” he said.

Ezekiel said he was excited for his father to drive him to school. He had asked his father nearly a week in advance.

This is the sixth year the Alachua County School Board has participated in the day for fathers to take their children, ages kindergarten through fifth grade, to school. Before classes begin, fathers and their children gather in their respective cafeteria for roughly 45 minutes to chat and eat together.

The students at J.J. Finley discussed a range of topics with their fathers, from their favorite color to Disney characters, while munching on chicken biscuits and slurping chocolate milk.

The designated day is a statewide initiative to highlight and support fathers engaged in their child’s education, according to the Florida Department of Education. It is held every year in September.

The program has been known to be successful in previous years in terms of the number of participants.

Within the last six years, almost 3,000 fathers in Alachua County have participated in the occasion, according to Caron Rowe, the school district’s food and nutrition marketing specialist.

Johnny Pagliarini, father of 10-year-old Mikayla, usually takes his daughter to school every morning, but he said this day just makes it even more special.

“It just brings everybody together,” he said. “Some kids don’t have their father around, but others show up. It’s important all around, for the whole school, the community and the kids themselves.

Faculty and staff sat with the students whose fathers were unable to attend. They tried their best to not make any child feel left out.

Below: WUFT-TV’s Chris O’Brien reports on the day’s event at another school, where Gainesville police officers stood in to be with those whose fathers could not be there.

Physical education teacher Johnny Cromwell is a strong advocate for dads being involved in their kids’ lives.

“It’s important for kids to see them here at the school,” he said. “It doesn’t matter at what capacity, just to have their presence here is enough.”

The students and fathers weren’t the only ones having a memorable day.

Kelly Jones, J.J. Finley’s principal, is relatively new to the school — taking over there in July.

She experienced the event for the first time.

She said it was nice to look across the cafeteria and see not only kids enjoying breakfast but their fathers enjoying it with them. She said she remembers her mother taking her to school most days but knows her father drove her once in a while.

“It’s a team effort,” Jones said. “We [parents included] need to work together for the success of the child.”

Cafeteria staff helped to keep the breakfast line moving, and the attentive teachers or staff members allowed the event to run smoothly, she said.

The morning function was supposed to end at 7:45, but some fathers trickled in later than expected and students needed time to walk to class with their dads.

By 8:15 a.m., the loud chatter had turned to silence. Every father, father figure and child had left the cafeteria.

Dana is a reporter for WUFT News who can be reached by calling 352-392-6397 or emailing news@wuft.org.
Previous Sept. 25, 2019: Afternoon News In 90
Next Florida Appeals Court Upholds ‘Red Flag’ Law In Gilchrist County Case