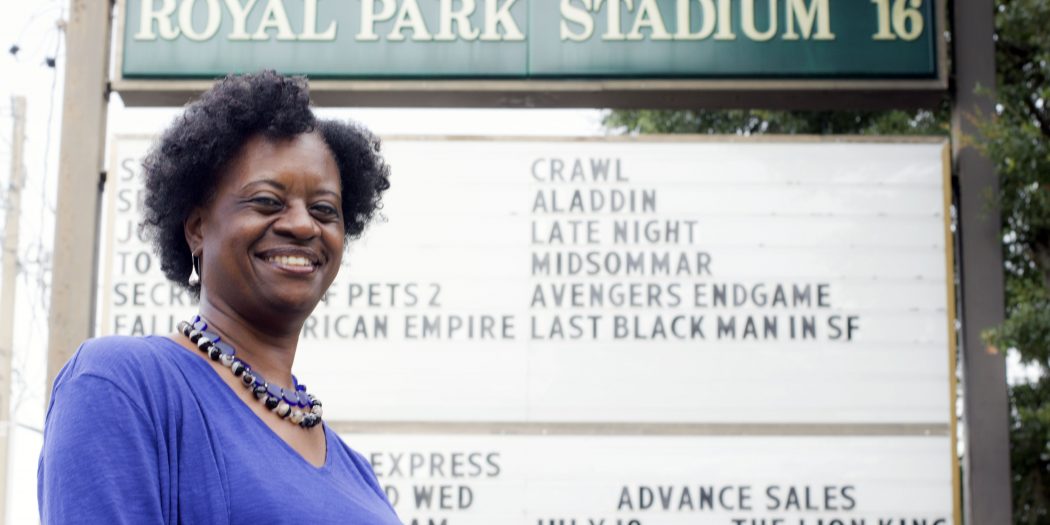 Katheryn Russell-Brown stands in front of the marquee at Regal Royal Park, where "The Last Black Man in San Francisco" premiered on July 5. (Melissa Hernandez/WUFT News)

Above: Hear a version of this story as it aired on 89.1 WUFT-FM.

Olubunmi Oguntolu said she couldn’t wait to see the movie “If Beale Street Could Talk.”

Oguntolu, who teaches a course on race and ethnicity in film at the University of Florida, was visiting family on the West Coast for winter break when “Beale Street” premiered in December.

Thinking she had too little time to see it while away, she opted to wait until back in Gainesville. But the limited-run film, which opened in 1,018 theaters nationwide, never came to the city.

She’s not the only Gainesville moviegoer decrying the lack of black-themed films in town.

Two UF professors are leading an effort to persuade the three local first-run movie theaters – all owned by Regal Cinemas, the nation’s second-largest theater chain – to offer more such films.

Last month, Katheryn Russell-Brown, a law professor and director of the university’s Center for the Study of Race and Race Relations, and Zoharah Simmons, who retired in May as an assistant professor of religion, contacted Regal Butler Town Center General Manager Bryant Rafferty.

According to a mass email sent on June 23 by Russell-Brown, Rafferty urged the professors to send a letter signed by as many people as possible. On June 28, they sent one signed by nearly 60 people to him and his counterparts at Regal Royal Park and Regal Celebration Pointe & RPX.

“Gainesville has a thriving intellectual and artistic community and can well support greater racial diversity in movie options,” it states.

According to the letter, eight black-themed movies had not come to Gainesville soon enough, if at all. In addition to “Beale Street,” which was nominated for three Academy Awards and won for best supporting actress (Regina King), the other limited-run movies included “Blindspotting,” “Bolden,” “Support the Girls” and “Sorry to Bother You.”

The letter also cites “The Last Black Man in San Francisco” and “Amazing Grace.” The former opened at Regal Royal Park on July 5, a month after its initial release across the country; the latter premiered nationally in December, but opens at the Hippodrome Theatre on Thursday.

“We the undersigned ask that you bring the above movies to Gainesville and that you give serious consideration to making more racially-diverse movie offerings available in the future,” the letter adds. “Today, there are many more diverse movies being produced. However, we cannot support them as a community if they are not shown on our screens.”

“We also note that this month, “The Pieces I Am,” a documentary on Nobel Prize-winning author Toni Morrison, was released,” the letter also states.

Since 2018, other black-themed movies shown in local theaters include “What Men Want,” “A Madea Family Funeral,” “Us,” “The Best of Enemies,” “Little,” “Shaft” – and, of course, “Black Panther,” the Marvel film that brought in $202 million nationally its opening weekend.

In an interview Sunday, Russell-Brown said as many as 75 people have now signed the letter. They include other professors and students from UF and Santa Fe College as well as the local community and Evelyn Foxx, president of the local NAACP chapter, Russell-Brown said.

Russell-Brown said it is important for theaters to “not just show movies with one thread of life of particular ethnic groups of color, but to show a more diverse array.” She added: “So much of what we see involves drama, action, but there is so much more – and that’s why I thought ‘The Last Black Man in San Francisco’ was important to bring to (local) audiences.”

“These movies should be educating as well as entertaining,” she said.

Though the letter doesn’t mention it, “Emanuel” – a film about the killing of nine black church members in a mass shooting in Charleston, South Carolina – was shown at Butler Town Center on June 17 and 19. The two-day run was timed nationally for the shooting’s fourth anniversary as well as the annual commemoration of Juneteenth Day, which marks the end of slavery in this country.

Indeed, it was moments after seeing “Emanuel” at Butler Town Center when Russell-Brown and others approached Rafferty to talk about the dearth of black-themed movies in Gainesville.

Attempts by WUFT News to reach Rafferty or the general managers at the other local Regal theaters for comment on this story were unsuccessful. Their corporate media office in Knoxville, Tennessee, did not respond to multiple calls and emails seeking comment.

In an email to Russell-Brown on Friday, Rafferty signaled he was taking the matter seriously.

“I reached out to my film buyer at the Regal corporate office, and he wanted me to thank you for your patronage and interest in these types of films,” the email stated. “He will keep an open mind when deciding which films to buy for his locations in Gainesville. If you have anything in particular you want to request, you can either email me or call him to let us know.”

Oguntolu said the decline of limited-run black-themed movies in Gainesville stems from what she considers distributors’ incorrect assumptions that too few people will buy tickets to see them.

Noting the relatively large black community in Gainesville and north central Florida, the film instructor said: “The people are here. The color is here to see these texts.”

The Hippodrome has a “Black Films Matter” series aimed at offering ones with better on-screen representation of African-Americans every last Thursday of the month, its cinema program manager, Matthew Cugini, wrote in an email to WUFT News on Tuesday.

“We have shown a wide range of films, from ‘Kirikou and the Sorceress’ to ‘Cleopatra Jones’ to ‘No Shade,’” Cugini wrote. “Although we have more budgetary limitations than the chain theaters, we are still trying.”

Kim Hankins, 75, a former librarian at Santa Fe College, said she has seen a steady decline of African-American themed movies in the city in recent years. “My feeling is that a lot of them probably don’t even make it here in the first place,” Hankins said.

She and her husband Gary, 78, went to see “The Last Black Man in San Francisco” at Royal Park on July 7 after reading a news article online casting it as a must-see film in 2019.

Hankins said she was disappointed that “Beale Street” never made it to Gainesville.

Josh Kickhoefer and Maggie Stokes, both 21, and a mechanical engineering student and mathematics graduate, respectively, at UF, also saw “The Last Black Man” on Thursday.

Stokes was not surprised that it was at Royal Park. “This is the only theater that has (brought) multiple different films that we would normally never be able to see in Gainesville,” she said.

However, both she and Kickhoefer said they would have signed the letter calling for more black-themed films locally.

“I feel like way more could be done in order to bring these kinds of movies to the Gainesville area,” he said.

Melissa is a reporter for WUFT News who can be reached by emailing news@wuft.org or calling 352-392-6397.
Previous July 15, 2019: Afternoon News In 90
Next The Point, July 16, 2019: Behind The Push For More African-American Films In Gainesville Theaters