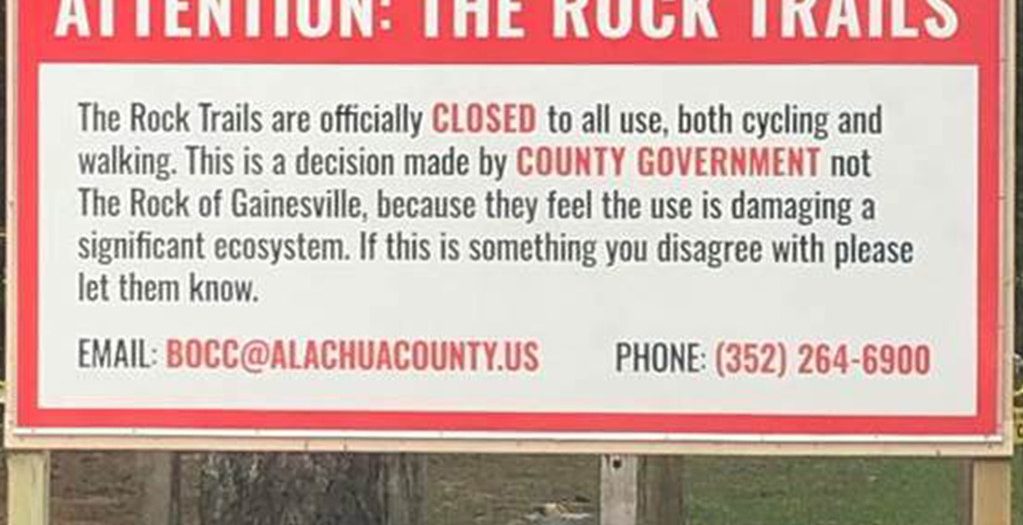 This is the sign now at the entrance to what were known as The Rock Trails. (Photo courtesy of Alachua County)

Employees at the Rock Church this past week put up a sign at the entrance of the trails on its property that holds the Alachua County government responsible for the closure of both the cycling and walking trails.

The county disputed that claim in a press release Thursday afternoon.

The proposal put forth by the Rock Church allowed for walking and jogging trails but prohibited biking activities due to adverse environmental impacts. Some of the protected resources within the 39 acres of conservation easement include sinkhole wetlands, caves and geological features.

Alachua County spokesman Mark Sexton said the county had come to an agreement with the church that only prohibited biking in the area, which the church’s consultant had first acknowledged in its proposal.

“This is too sensitive an area to have mountain biking taking place, but we agreed that walking and jogging trails would be a fine use of that area,” he said.

Sexton said the sign is inaccurate because the county does not have a say in the activities the church authorizes on its property.

Member of the Gainesville Rock Club, Erik Anderson said he is extremely disappointed and confused with the misinformation that has been put out. Both sides, he said, “were kind of giving us a blurred response.”

A board member of the Gainesville Cycling Club, Todd Leedy who is a frequent user of the trails says the trails have been a wonderful asset to the community.

“It’s a loss for a lot of members in the community who use that resource,” he said. “If they stay closed, I guess people would say they were grateful they’d been open for as long as they had been, but that doesn’t mean we’re happy to see them close.”

In a competing press release on Thursday, The Rock Church stated the trails will remain closed until further notice and put the blame back on the Alachua County Environmental Protection Department.

The Rock of Gainesville church purchased 160 acres of land on Newberry Road in 1997 with the plan to eventually move to that new location. The land is beautiful with rolling pastures and heavy woods. Wanting the community to enjoy this land as well, we opened it up to the public under a state statute that allows public use of private land without liability to the owner. Mountain bikers made trails throughout the property.

The Rock of Gainesville paid off the mortgage on the land in less than 10 years and began the process to develop the Newberry Road Property. During county reviews of the proposed project, the County Environmental Protection Department (EPD) determined that over 42 acres of the property was a “significant habitat” and should be protected as a Conservation Management Area (CMA). The county made the CMA set aside a condition for allowing The Rock of Gainesville to develop any of the remaining acreage. Though we believe that our environment must be protected, losing the right to develop more than 25% of our land was a difficult decision.

In 2008 we put our development plans on hold because the economy was suffering. We did not believe it was wise to build at that time. Since then the EPD has not liked the fact that mountain bikers were still on the property including the CMA areas.

In 2018 The Rock of Gainesville began again to develop the property. In a county development review commissioner meeting, earlier this year, the church reluctantly agreed to close the trails down in order to get development approval. We have an estimated starting date of mid-May for this project. We have been “unofficially advised” that if the trails do not recover sufficiently during the building process, the church may not receive a Certificate of Occupancy for our newly constructed building. At this point, the church has decided that it has no choice but to immediately close the trails.

We are saddened by the need for this decision and for the lack of more advance notice to the community. In the future if circumstances change, The Rock of Gainesville will gladly consider reopening the trails if possible.

Valentina is a reporter for WUFT News who can be reached by emailing news@wuft.org or calling 352-392-6397.
Previous Potions And Profits: Modern Witches Making A Living In Gainesville
Next The Point, April 26, 2019: High-Profile Departures At UF Follow Investigation Into Improper Spending