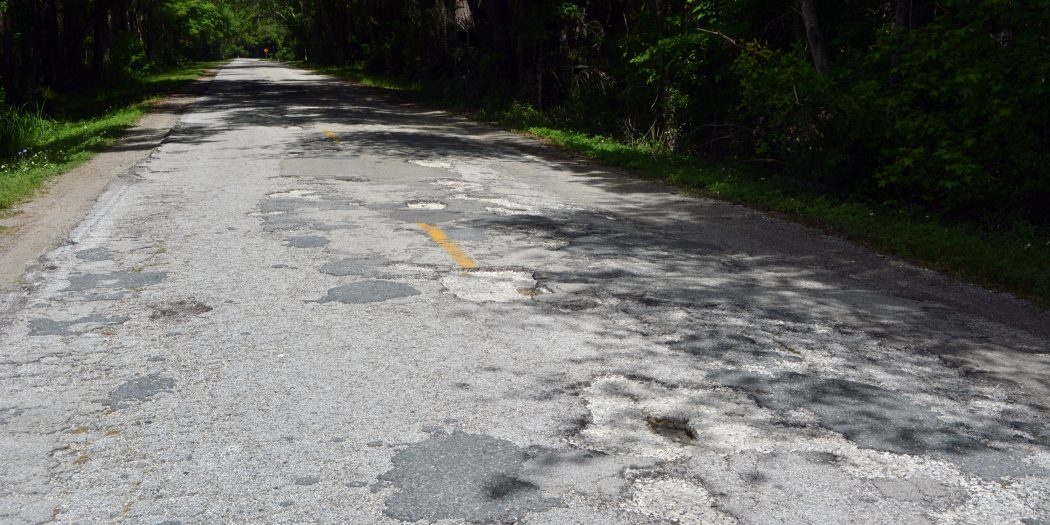 Potholes on County Road 2082 can be as large as trashcans or yoga balls. Although its condition is declining, CR 2082 is a designated scenic route. CR 2082 is also known as "the worst road in Alachua County" due to its potholes and bumps, according to Alachua County Commissioner Robert "Hutch" Hutchinson. (Kristen Altus/WUFT News)

People who travel or live near CR 2082 – a scenic but poorly maintained stretch of highway near Rochelle – had mixed reactions to Alachua County commissioners’ plans to close the road.

Those who regularly travel the road agreed with commissioners that it doesn’t make sense to spend the money to maintain it, but some area residents are concerned about how closing the road will impact traffic on CR 234.

The road, which connects Hawthorne Road to CR 234, has weathered away significantly, making vehicles subject to damage from trashcan-sized potholes.

Public works director Ramon Gavarrete recommended three options to rehabilitate the road: Chip-seal the road; close it to all traffic but allow access for private property owners; or close the road and vacate land owners’ right-of-way.

Commissioner Robert “Hutch” Hutchinson said the board voted to move forward with plans to permanently barricade the roadway, remove the asphalt and put down grass to stabilize the gravel underneath.

“The final decision will be made at a public hearing in April or May, but the commission was unanimous in their recommendation to close the road,” he said.

Hutchinson said closing the road was the most affordable option. The county will give the three adjacent land owners, which include a family trust, Florida State Parks and Alachua Conservation Trust, a license agreement to use the closed CR 2082 for land management and search and rescue.

“It’s sad that we don’t have adequate funding for maintaining our roads, and this is a casualty of that,” Hutchinson said. “But this is one of the few roads that has alternative routes.”

Chip sealing is a process that includes mixing rocks and tar, then pouring the substance over existing pavement. Hutchinson said chip sealing can be a cheap option, but not a lasting one. The county would have to chip seal again in another 10 years.

Returning the road to its lime rock or gravel surface would negatively impact the surrounding sensitive environment due to stormwater runoff.

Traffic will be rerouted further east on Hawthorne Road to CR 234 through Rochelle, adding 1.7 miles (or 2 minutes) to commute times.

Doug Hornbeck, a volunteer for the Alachua Conservation Trust, said he rarely drives on the road commissioners plan to close.

“The road is in such bad shape I just go around it now and drive a little bit down the road,” said Hornbeck. “It’s certainly just as fast and certainly safer.”

Hornbeck said chip sealing CR 2082 would only be a temporary fix, and closing the road allows for nature restoration in the area.

Both Hamann and Hornbeck hope the closing of the road will help to expand the protection of adjacent land for conservation.

CR 2082 also parallels the Gainesville-Hawthorne State Trail, and many residents enjoy the road for its serenity and abundant biodiversity.

Wes Wheeler, 58, often visits Prairie Creek Lodge and runs along the trail. He knows the road needs a lot of work and said closing it is the smarter option.

“Wretched, horrid, deplorable, abysmal, how many adjectives are there? It’s in bad shape,” Wheeler said. “But sometimes you got to be smart, and it wouldn’t be smart to go spend a bunch of money just to fix it again.”

Rochelle residents Chip Harris and his wife, Laura, live just south of the intersection of CR 2082 and CR 234. They moved here three years ago for the town’s quiet, secluded lifestyle, but they know that’ll change soon if more traffic is routed to CR 234.

“I’m upset about the increased traffic that we’ll have to withstand,” said Laura Harris, whose home is visible from CR 234. “We can hear (the cars); the road is right there. And we bought this property on a quiet street; that was what we wanted.”

“Having the county look at that road as an unwelcome eyesore is a fiscal decision. It doesn’t play into any other matter concerning the county.”

While the Harrises hope to see a philanthropic organization pave the road, it’s not too late to change the commissioners’ minds, Hutchinson said.

“This is a fiscally conservative thing to do with the casualty being a little over a mile of scenic highway,” he said. “The final decision has not been made. Now it’s hearing more broadly from the public.”

Kristen is a web editor and reporter for WUFT News. She can be reached by calling 352-392-6397 or emailing kaltus@ufl.edu. Follow her on social media @kristenaltus.
Previous Mar. 29, 2019: Morning News In 90
Next Lafayette County Dairy Farmers Struggle As Milk Consumption Sours