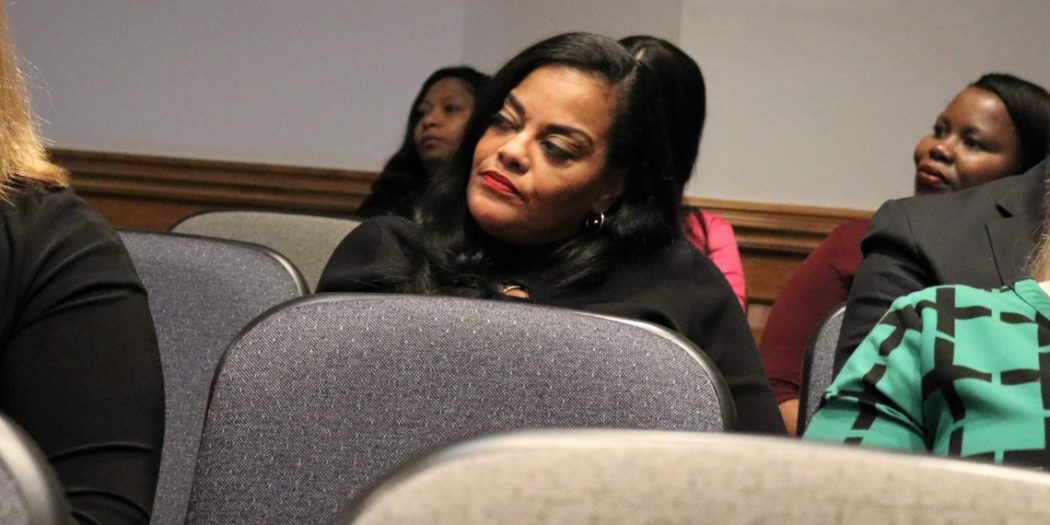 Deborah Bowie looks on as a member of the public criticizes her appointment as Gainesville's interim city manager Thursday afternoon. (Jacob Berkowitz/WUFT News)

Gainesville City Hall Auditorium was only half-full Thursday afternoon, but the room brimmed with tension.

It was the last day of Anthony Lyons’ tenure as city manager, and the City Commission needed to select an interim city manager.

Lyons’ resignation in December came after a wave of public criticism on his management style and his role in the controversial GNV R.I.S.E initiative. The three candidates who applied to fill his role while commissioners searched for a permanent replacement were city employees Deborah Bowie, Michelle Park and Steve Varvel.

After much deliberation and a couple of outbursts from the public, the commission ultimately chose Bowie, who has served as Lyons’ chief of staff for the last eight months. Bowie received five votes, with the remaining two going to Michele Park.

Park and Varvel are longtime Gainesville city employees. Park is the assistant director of Wild Spaces and Public Places and Varvel is the city’s risk management director.

All seven city commissioners echoed the sentiment that each of the three candidates were qualified.

“Regardless of who the (interim city manager) was, we were all going to be excited about that person and support that person,” Mayor Lauren Poe said. “Each one of them is an extraordinary human being that has committed their life to public service, has taken every rock that has been thrown at them at gotten right back up, and is only stepping up now out of a sense of duty.”

But for Commissioner David Arreola, it was Bowie’s executive experience that elevated her in his mind.

“Her raft of executive-level experiences, even in other cities, I think makes her uniquely qualified for this particular moment,” he said.

Commissioner Gail Johnson made her decision based on three criteria: Leadership in the budgeting process, stability and the city’s partnership with the University of Florida.

Commissioner Harvey Ward, Commissioner Adrian Hayes-Santos and Mayor Poe also thought Bowie was the best choice for interim city manager. Commissioners Helen Warren and Gigi Simmons initially planned to vote for Park, but in the end approved of Bowie as a show of unity among the commissioners.

Bowie will start her new job during a tumultuous time for the city commission. In addition to the turnover of staff, the commission has struggled to maintain proper decorum in recent months. During the meeting, one man, a former lawyer named Gabe Kaimowitz, was escorted out by a police officer after several outbursts but was allowed back in later on.

Still, the outbursts and verbal attacks were a distraction to which each of the commissioners spoke on at one point during the meeting.

“I’m concerned as to the mood that I’ve seen in this room over the last few months that makes this community look like a circus. We have policies. We’ve tried to establish a décor in the room, and I feel for the mayor to have to be the one to have to call it out all the time,” said Commissioner Warren.

Johnson said she didn’t feel comfortable bringing her daughter to commission meetings due to the incivility.

During the time allotted for public comment, a few citizens expressed their concerns about Bowie, citing her time as former Birmingham Mayor Larry Langford’s chief of staff. Langford was jailed on corruption charges, though Bowie was not charged with any crimes.

Bowie will begin work immediately, while former city manager Lyons takes on an advisory role to the city commission through Feb. 14.

Jacob is a reporter for WUFT News who can be reached by calling 352-392-6397 or emailing news@wuft.org.
Previous Jan. 17, 2018: Evening News In 90
Next Gainesville Bans Expanded Polystyrene, Certain Plastic Bags As Of August 2019