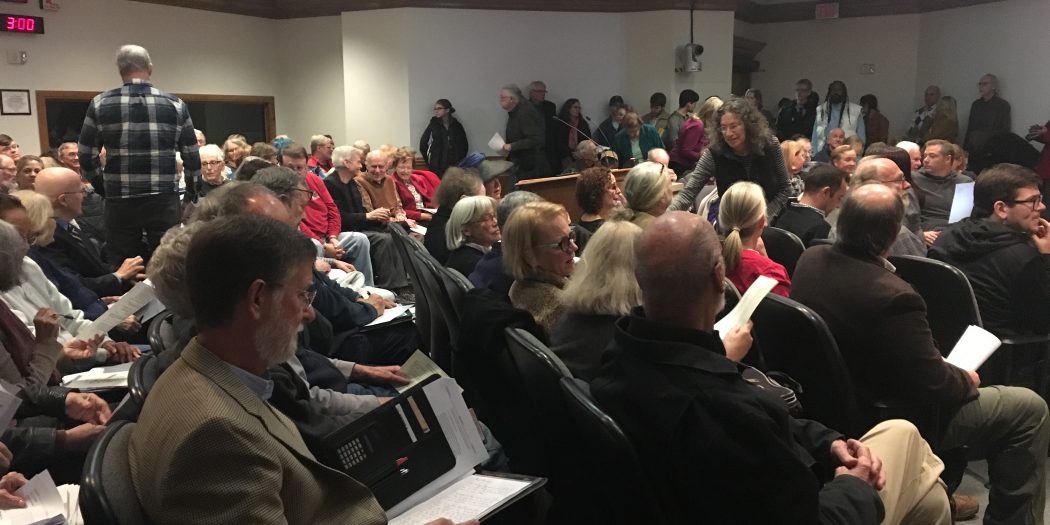 The City Commission Auditorium exceeded its capacity by over a dozen Thursday evening. Everyone leaning against the wall was asked to move to an overflow room where the meeting was broadcast. (Jacob Berkowitz/WUFT News)

More than a hundred concerned residents packed the City Commission Auditorium in a meeting that lasted from 6 p.m. to midnight Thursday evening.

They were there to speak in opposition to the city’s proposed change to its comprehensive plan, and they proved successful in getting commissioners to delay a decision on that change.

Attendance was so high that many needed to watch the meeting from an overflow room downstairs.

Discussion centered around a controversial program called GNV R.I.S.E (Resilient, Innovative, Sustainable, and Equitable), a plan developed by the city’s Department of Doing to provide more affordable housing in Gainesville.

GNV R.I.S.E and its corresponding ordinance have received significant backlash from community members, mostly Gainesville homeowners, over the last several months, leading the commission to twice delay a decision on the plan heading into Thursday.

“We felt that we would propose language that’s consistent with what would benefit this community,” said the director of the Department of Doing, Wendy Thomas.

Still, those in attendance were skeptical. Of the 70 or so people that spoke their minds, just three agreed with the plan. The vast majority were vehemently opposed.

Among the concerned citizens were former mayors, professors, land-use professionals and longtime Gainesville residents. Some of their concerns with GNV R.I.S.E included lack of protection from gentrification, potential environmental hazards, vague language, too much power to land developers and a lack of public engagement.

Jean Chalmers, a realtor and mayor of Gainesville from 1984-85, lauded the commission for trying to solve the longstanding issue of affordable housing, but had reservations about the plan, specifically the provision for incentivizing developers to build more densely-populated structures in exchange for renting at least 10 percent of them at below market or “affordable” pricing.

“With rent controls being illegal in Florida, what power does the city have to ensure those 10 percent remain low-income units?” she asked.

Others, like Gary Gordon, who served as both a city commissioner and as Gainesville’s mayor from 1985-86, were more brusque in their responses to the plan.

“This is not an affordable housing proposal,” he said. “This will not address the problems of low-income people in this town, black or white or any other color.”

Under the plan, applicants for affordable housing, would need to make 80 percent or less of the surrounding area’s median income, or about $40,000 for an individual. Several residents spoke on the number not representing low-income people well enough.

However, over the course of six hours it was clear the prevailing grievance in the room was the commission’s lack of community engagement throughout the process.

The commission agreed that more engagement and discussion were a necessity moving forward.

“I’d like to see all of us at the table to figure out how we’re going to work on this together moving forward,” said Commissioner Gail Johnson.

“We invite our citizens, specifically our elected neighborhood association presidents, to discuss a path forward that includes many of the things we’ve mentioned tonight,” he said. “I’ll tell you what’s the one thing I won’t accept and that’s doing nothing. I was not elected to do nothing. I heard many of you expressing your willingness to work with us – that was another thing I was really listening for – and I’m going to take you up on that.”

The commission voted unanimously to delay their decision on the comprehensive plan and to schedule a community workshop in early 2019.

“Our history can only provide us context. But we have to look within ourselves to supply the solution,” Arreola said.

Jacob is a reporter for WUFT News who can be reached by calling 352-392-6397 or emailing news@wuft.org.
Previous Storms, Disease And Rising Labor Costs Threaten Florida’s Blueberry Industry
Next Gainesville Church’s Event Creates Concern It’s Too Similar To Conversion Therapy