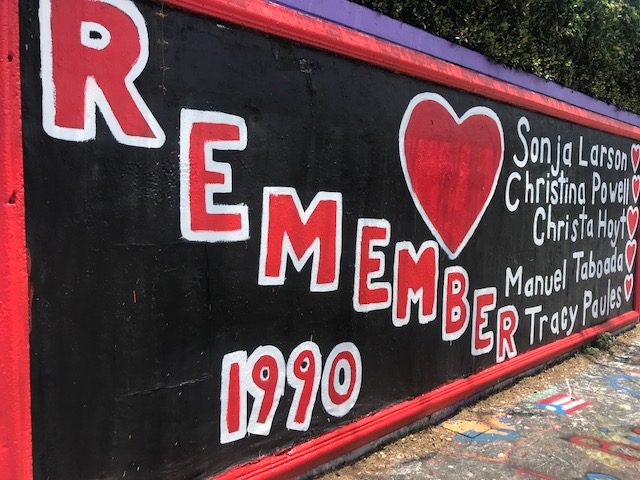 The mural for the victims of the 1990 murders. (Matthew Harrell/WUFT)

The 34th Street Wall has become a landmark in Gainesville, but its history remains somewhat of a mystery.

The wall was built in 1979 by the Florida Department of Transportation when 34th Street was widened from two to four lanes. The 1,120-foot wall’s main purpose is to prevent erosion from the University of Florida golf course from spilling out onto the road, but it has turned into something between a canvas and a bulletin board, on which people display their art, write messages to friends and family members, and post announcements for upcoming events.

The city has tried to fight the graffiti in the past, painting over it with white paint or even painting the wall with one large mural, then sealing it to prevent more paint from being added to the wall.

Hawkins said she brings her friends and family to the wall when they visit Gainesville.

“The 34th Street Wall is a citizens’ monument,” said David Arreola, City Commissioner for District 3, which includes the wall. “It’s by far my favorite Gainesville monument.”

Arreola said the wall represents Gainesville’s history and is one of the most meaningful monuments in Gainesville.

In 2001 the Gainesville City Commission tried to pass an ordinance that would make it possible to punish graffiti artists. The definition the City Commission used to define graffiti included painting on the 34th Street Wall.

In a Community Development Committee meeting on Dec. 3, 2001, the Committee decided to clean the wall, even though it is owned by the Department of Transportation.

One of the concerns the committee had was gang-related graffiti, said John Barrow, a former City Commissioner who was on the commission in 2001. There were also some concerns from the legal staff about making the 34th Street Wall exempt from the ordinance.

Barrow said the community, including students and local artists, came out in support of the wall being exempted from the ordinance.

Although the wall was not officially exempted from it, there was an understanding that it would be not be included in the ordinance.

Now, Keep Alachua County Beautiful paints over any obscenities or profanity that have been placed on the wall.

The UF Interfraternity Council took over maintenance of the memorial in 2000. Members of the council will repaint the mural in the rare instance that it is defaced.

The centerpiece and the only constant among the ever-changing art on the wall is the memorial for the five students killed by Danny Rolling in 1990. Adam Byrn Tritt, who was a teacher at City College in Gainesville, painted the memorial in the aftermath of the murders.

The memorial is also the only permitted section of the wall. Since it is still technically illegal to paint on the wall without receiving permission from the Department of Transportation, George Paules, the father of one of the victims, received written permission from the Department of Transportation to paint on that section of the wall.

In 2010, UF Interfraternity Council installed a plaque in the sidewalk in front of the mural. There are also five trees in the median of 34th Street, one for each victim of the student murders. One of the trees is being replaced this week, according to FDOT, because it is diseased.

“It’s something that developed over time going back to when I was in college,” said Barrow about local artists painting on the wall. “It became sort of a tradition for college kids and high school kids.”

Matthew is a reporter for WUFT News who can be reached by calling 352-392-6397 or emailing news@wuft.org.
Previous The 2018 County Candidates Who Have Qualified In WUFT’s Coverage Area
Next Hawthorne Middle/High’s Fate Still Undecided With Initial Release Of 2018 School Accountability Report

The enfant terrible of Gainesville, how Tom Miller is shaping the underground art scene

He needs no one's approval. The Gainesville-based artist often makes lookers-on question if he's goofing off or making serious art.