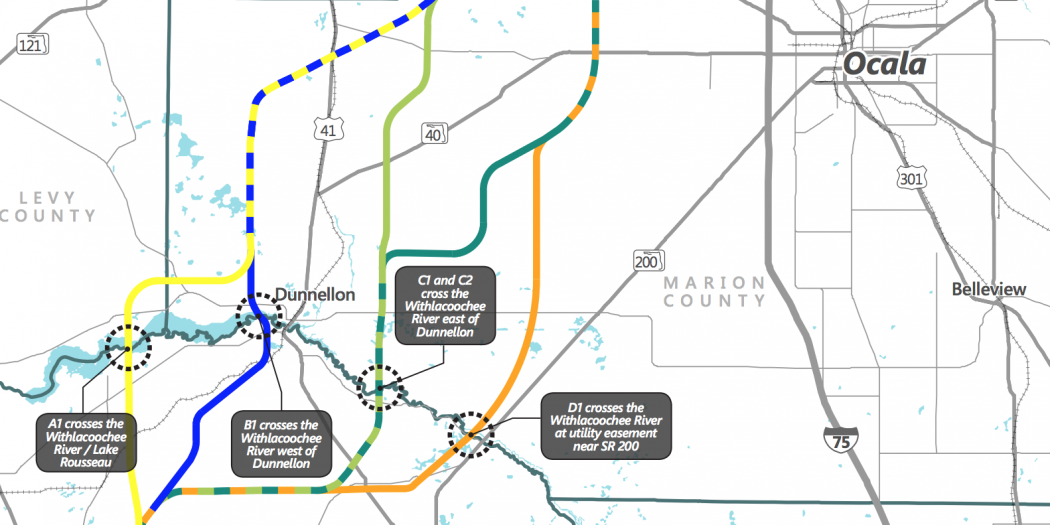 Marion County commissioners on Tuesday unanimously agreed to sign a resolution voicing their disapproval of proposed Coastal Connector routes through the county.

The Department of Transportation presented on May 1 four possible routes to the commissioners and Marion County residents in a public meeting. The commissioners all agreed that while infrastructure is important, the proposed routes would negatively impact the county’s agricultural and equestrian industries too much for them to support the Coastal Connector as currently conceived.

The plans offered routes through and around Dunnellon. Then, the Coastal Connector would run through the northwestern portion of Marion County, which the commissioners agreed was prime real estate for farming and horse raising.

“We need to get people from point A to point B and we do need to do something about the congestion on I-75,” commissioner David Moore said. “I agree, all those things are valid, but we don’t need to destroy people’s livelihoods in the process.”

Matt Varney, an Ocala real estate professional, addressed the commission during public comment. He said the Department of Transportation and Florida’s Turnpike Enterprise vastly underestimate the impact that the proposed routes would have on the county, both environmentally and on the quality of life for surrounding residents.

“There was absolutely zero understanding as to the immense value that this land carries per acre and how their routes would absolutely decimate property values in these areas,” Varney said.

His comments earned him cheers and applause from those attending the meeting.

Mayor of Dunnellon Walter Green also expressed his opposition to the project.

“I can’t emphasize enough to you, I don’t think I’ve had an issue that has created more tension and more uproar than this Coastal Connector,” he said.

The Coastal Connector is a state project in development that aims to alleviate some of the congestion along Interstate 75 by offering alternative corridors around highly trafficked areas.

All the newly proposed routes would end on highway 326 north of Ocala. There are an additional two options that would offer a connection to I-75 and U.S. Highway 301, according to the Corridor Alternatives public meeting documents. There are already plans for the toll road to come north from Crystal River.

According to the public meeting documents, the project will cost between $800 and $880 million, depending on the route. The northern segment connecting the corridor to I-75 and highway 301 could cost an additional $220 million.

While the county commissioners unanimously disapproved of the suggested routes, Commissioner Carl Zalak stressed that the Coastal Connector is a state project, not a county project.

“The only way that this thing really gets stopped is if someone like the governor or secretary says that it’s done,” he said. “I would propose that if any of you have the ability to do that or to lobby on that behalf or to get people together to that end, that is the strongest case that we have as a community.”

Commissioner Kathy Bryant said people opposed to the proposed routes should email Governor Rick Scott and their state representatives. She said the commission’s resolution will be sent to a number of people, including Governor Scott.

Matthew is a reporter for WUFT News and Fresh Take Florida who can be reached by calling 786-332-8003 or emailing marrojas@ufl.edu.
Previous This Graph Shows Recent Trends in Taser Usage in Alachua And Marion Counties
Next Gainesville Among 10 Cities Joining A Legal Challenge Of Gun-Law Penalties