By Alexa Lorenzo and Grace King

A local veterinarian makes a trip to the Dignity Village homeless encampment in Gainesville on the third Sunday of every month.

She brings a team of volunteers with her to provide the best care they can for the campground pets.

“Oh I know,” Dr. Patti Gordon says as she comforts a tiny dog while checking his teeth. “Just a minute. Just a minute. Oh good boy! That was so much better than last time.”

Gordon has been a veterinarian for more than 30 years. She works at a clinic, but also sets up a makeshift office at Dignity Village once a month.

Gordon joined forces with Elizabeth Howard to bring pet care and pet food to the homeless.

“People will do what they have to do to feed their pets, and often times they are sharing their own food with them,” Elizabeth Howard of the Home Van Pet Care Project said.

After some paperwork, a nail trim — “we’re just going to get rid of those French tips” — and a weigh in (“Oh, he’s gained a pound”), the dogs and cats are ready for medical care.

“He got his nail clipped, he got a booster shot, and then he’s got some medicine on the back of his neck,” Courtney Nick, the dog’s owner, said.

All the vaccines, medicine, food and leashes have been donated by local veterinarians and pet care facilities. Gordon is always looking for donations; right now, the need is for leashes and harnesses.

“Everybody’s goal out here is to get a spot to live,” Gordon said. “That’s important for them to keep their pets because a lot of them won’t move if they don’t have a place for their pets.”

Gordon’s team brings a truck full of records and a car full of medicine.

“They’re good people. They do a lot of good things around here. I tell everybody where I live what kind of work they do,” pet owner Sharon Degren said.

Every month, Gordon sees firsthand the importance pets serve in the life of a person experiencing homelessness.

“For the most part, that’s their security. That’s who loves them. That’s who doesn’t judge them,” she said. “And so we don’t either.”

Alexa is a reporter for WUFT News and can be contacted by calling 352-392-6397 or emailing news@wuft.org.
Previous Feb. 19, 2018: Afternoon News In 90
Next What Effect Will Heartwood Development Have on East Gainesville Property Taxes? 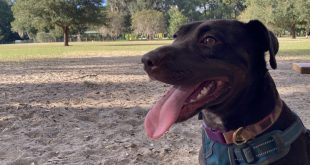