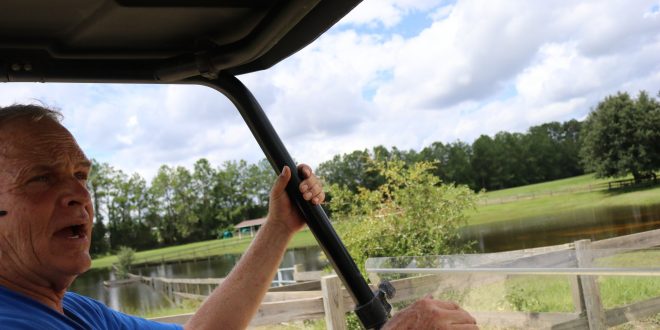 Paul Gregory, who runs Mill Creek Farm horse sanctuary in Alachua, drives over muddy ground on Thursday. Flooding from Hurricane Irma’s rains overtook much of the farm’s land, and some, like in the pasture behind Gregory, is still under water. (Darcy Schild/WUFT News)

Greener Pastures In Sight For Alachua Horse Sanctuary After Irma

Even with the power boost, the cart struggles to move along the flooded path at Mill Creek Farm horse sanctuary in Alachua.

“This is the first day we can access this,” Gregory, Mill Creek’s owner, says of one of the farm’s several dirt paths, which have been impassible by vehicle because of rains from Hurricane Irma.

“We had lots of trees down and flooding like I’ve never seen before. The creek, in some areas, was almost 5 feet flooded.”

Irma has left a destructive trail of flooding, power outages and gas shortages across Florida. And while many people got in their cars just before it hit and fled north and west to safety, Gregory stayed home to care for Mill Creek’s 140 horses — and Lady Guinevere the hound.

The 400-acre sanctuary is home to retired military, police and circus horses as well as those that were neglected and abused and then rescued by other organizations. Some of them are blind, some are emaciated, and all are at least 20 years old. 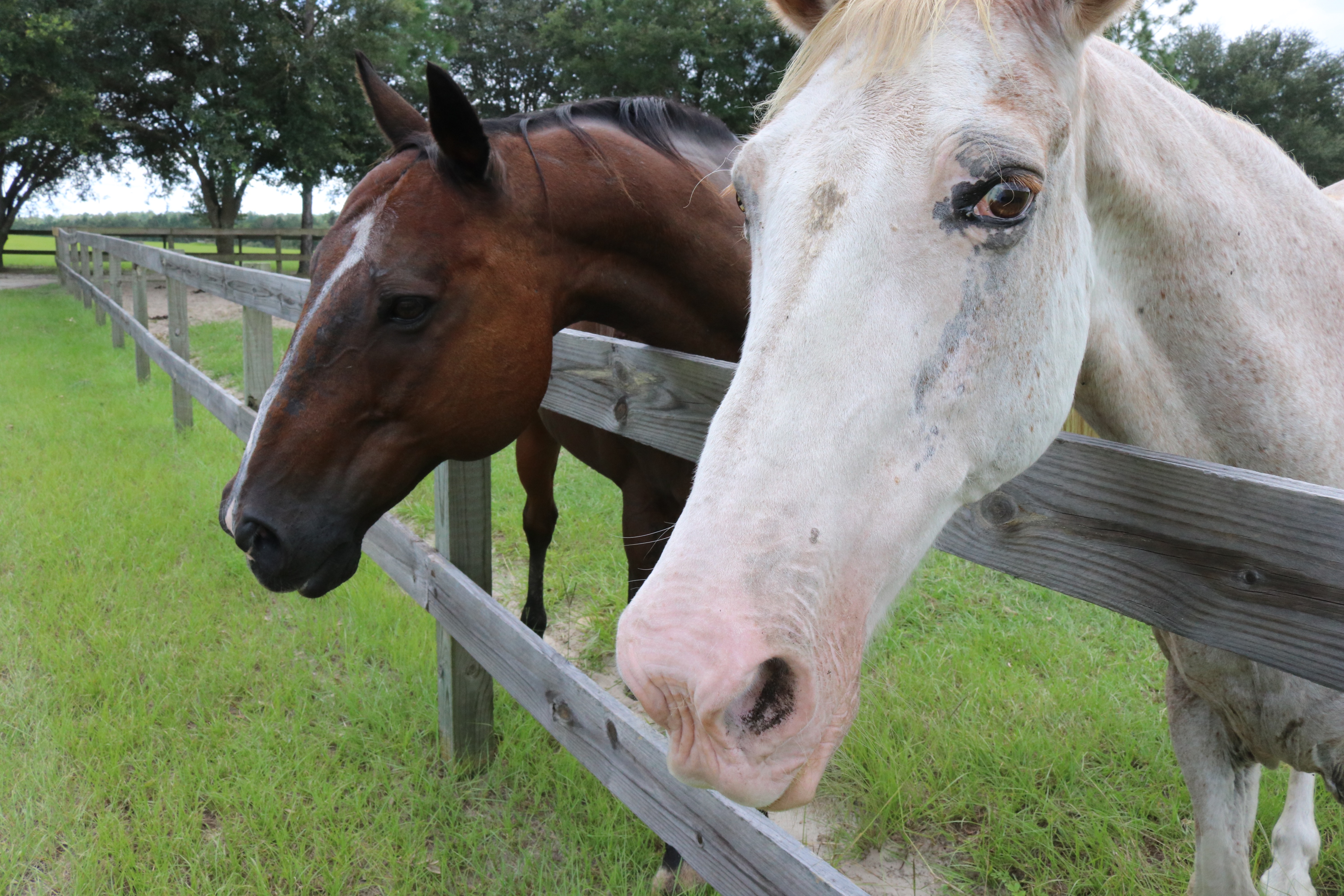 Gregory said that leading up the storm, he ordered extra food and supplies to ensure the horses could be fed and cared for during and after.

“Our main concern was the horses,” he said. “We wanted to make sure we had plenty of feed for after the storm.”

Despite extreme flooding, Gregory said, all the horses came out unharmed.

“Every pasture has high areas, so the horses know” to go to higher ground, he said. “They’re amazing. They’re very intuitive.”

Golf carts are the typical mode of travel at Mill Creek. But on Monday — the morning after Irma left its mark on North Central Florida — Gregory had only one option to deliver food and medicine to the horses surrounded by floodwaters.

“We actually had to swim across to get to the meadow side, the other side of the farm, in order to check on them,” he said. “We couldn’t get a car across.”

Justin Drawdy, who volunteers at the farm, joined Gregory in traversing flooded pastures to check on nearly 70 trapped horses.

“When we waded down, [the water] was up to here,” the Alachua resident said, putting his hand above his heart.

Drawdy said he stayed at the farm over the weekend because he didn’t feel safe in his mobile home.

“This tops it all,” he said. “I’ve lived here my whole life — 34 years — and I’ve never left my home during a storm. I came out here not only for the horses, but because I didn’t trust my house.”

Another volunteer, Heather McAlister, said now that the storm has passed, the goal is to remove fallen trees and smaller debris from the farm as fast as possible. 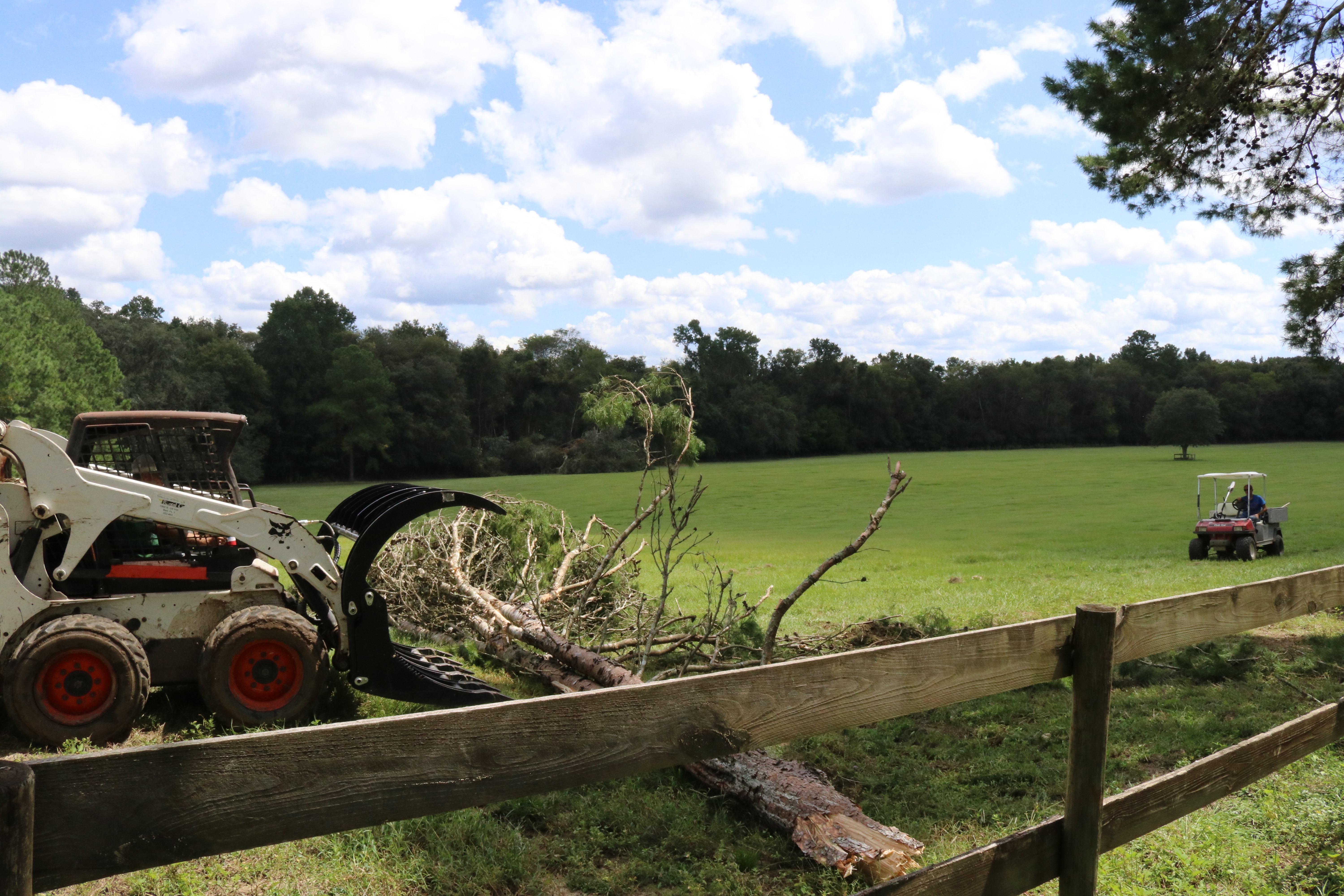 Typically, the farm is open every Saturday to visitors, outside volunteers and potential donors — but until the cleanup is finished, the gates will remain closed.

“I’ve never seen water like this,” McAlister said. “Now, it’s just about getting the brush and stuff out of the way so we can get it back open to the public.”

Gregory hopes the water will recede and the cleanup will be finished by the weekend of Sept. 23, allowing guests to return then.

“It’s still not safe for the public to come out, but all the horses are doing great,” he said. “All that matters is that they’re all safe.”

Darcy Schild is a University of Florida journalism student and reporter for WUFT News. She can be reached at darcyschild@gmail.com or at 419-239-9411.
@darcyschild
Previous Gainesville Police Reviewing Complaint Against Officer From Viral Photo
Next Deputy Ride-Along Shows Alachua County Flooding, Alligators On Streets