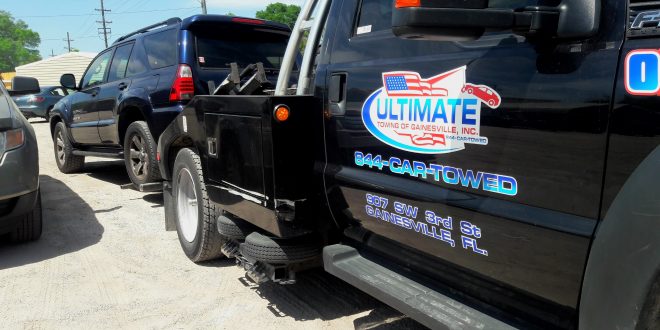 An Ultimate Towing of Gainesville truck returns to the company's impound yard Wednesday with a vehicle. The company's practices — especially at the Sun Center downtown — have stirred some intense debate lately. Owner Steve O'Grady says he wants to stop using spotters at the Sun Center but can't until the city changes its rules. (Ramsey Touchberry/WUFT News)

Michael Wohl made the same mistake as many others last month when he went to Boca Fiesta in downtown Gainesville.

He pulled into the Sun Center parking lot.

He and his wife parked and ate dinner, but when they returned, their car was gone.

It had been towed.

The reason, he discovered, is that Boca Fiesta, as well as the Hippodrome State Theatre, is not part of the Sun Center complex.

“I personally saw either six or seven other vehicles getting towed during the time it took us to figure out why our car got towed,” Wohl said. “It happened in less than 30 minutes.”

To catch Wohl and other violators, Ultimate Towing of Gainesville uses “spotters,” or those who monitor parking lots for potential violators.

The spotters watch for whoever parks and steps off Sun Center property, the only place at which Ultimate uses spotters. They then photograph the violator to have proof and radio for a tow truck.

Ultimate has “two tow trucks right around the corner that are parked with the engine running. And as soon as their spotter sees them go, they point to it, and the car is gone,” Wohl said. “Before they’re probably even seated at Boca Fiesta, their car is gone.”

Such issues around roam towing are ones of intense frustration lately in Gainesville, but Ultimate owner Steve O’Grady wants to solve one of them — the spotters — by ceasing to use them, he said in a press release Friday.

But first, he said, the city needs to change its rules.

Spotters are necessary because the city requires towing companies to have photo evidence that a vehicle was illegally parked, O’Grady said. If the city no longer required photo evidence, he said he could get rid of his spotters.

“It’s in the best interest of my company not to have pictures,” O’Grady said. “It will speed up the towing process, and it’ll save my company a lot of money in payroll.”

O’Grady said there shouldn’t be an issue of those towed or city officials trusting him to do what’s legally right.

“You just have to trust me. The evidence would be that your car ended up in my tow yard,” he said. “I’m not aware of any other municipalities in Florida that require pictures before towing.”

One person towed by Ultimate, Phyllis Burton, posted on the “Gainesville Word of Mouth” Facebook page that her vehicle was removed despite her remaining at Liquid Ginger, which is in the Sun Center.

Burton said that when she went to Ultimate Towing with her husband to retrieve her car, an employee told the couple that he had a photo of them leaving the Sun Center. The couple paid the $100 tow fee and filled out the paperwork, but when they saw the photo, they noticed it wasn’t them.

So they were refunded the $100 tow fee and were given an extra $25 for the trouble.

Acknowledging that incident did happen, O’Grady said that mistakes do happen and that case was only one out of some 5,700 cars the company tows annually within Gainesville’s city limits.

Ultimate’s spotters do receive a commission for each vehicle they helped in towing, he said, but they also receive a penalty for any wrongfully towed vehicles.

“Commission is based on experience and performance. Penalties are based on seriousness of any mistake,” said O’Grady, who declined to give specific numbers.

City Commissioner Adrian Hayes-Santos said he has met with O’Grady and other tow companies in an effort to do away with certain practices.

Hayes-Santos said he’s in favor of photo evidence of a violation but would prefer it be done by a parking-lot attendant instead of a towing-company employee.

“I think property owners can definitely have someone there who can let you know if you’re leaving the property,” he said. “We need to start doing more preventive tactics to ensure that people don’t get towed in the first place.”

One change O’Grady said he has implemented is disallowing those towed to use Visa or MasterCard credit cards.

This comes after the credit-card companies notified him they would no longer let Ultimate accept their cards because of people who disputed the towing charge. This means payments will be accepted only in cash or through debit cards.

This story has been updated.

Ramsey is a reporter for WUFT who can be reached by calling 352-392-6397 or emailing news@wuft.org.
Previous Gallery: Women’s History Month Charity Art Show
Next Florida House OKs Therapy Animals For Children In Court