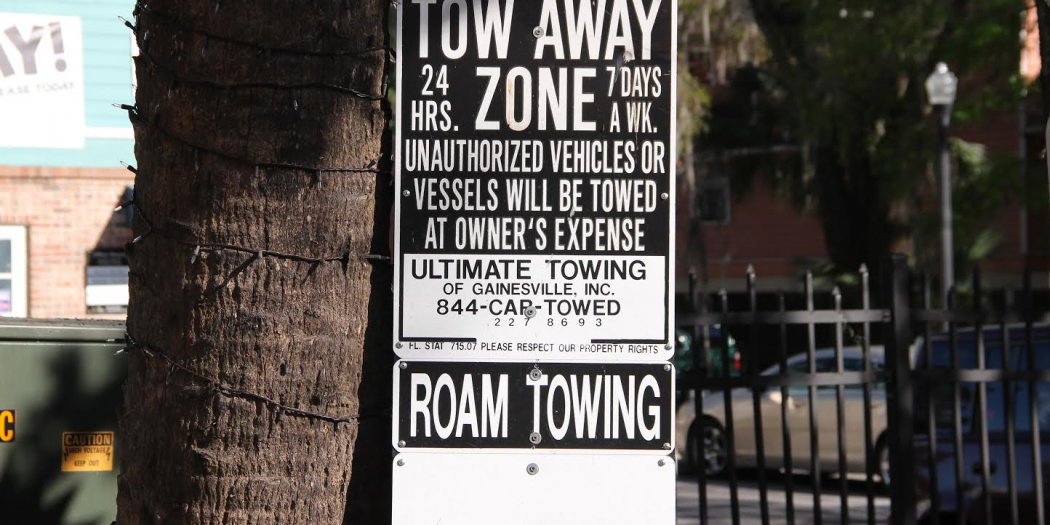 Ultimate Towing is under scrutiny from the Gainesville City Commission for its "predatory" roam towing practices. (Syama Allard/WUFT News)

The Gainesville City Commission is taking a closer look at roam towing practices, infamously used across the city by Ultimate Towing.

At a city commission meeting Thursday, Gainesville Mayor Lauren Poe passed a motion to refer the subject of Ultimate Towing of Gainesville Inc.’s roam towing practices to a general policy meeting, where commissioners will discuss the issue in more depth.

Roam towing, the removal of an illegally parked vehicle from private property at the property owner’s direction, was a topic of heated discussion on the Facebook group “Gainesville Business Word of Mouth” in February, when the owner of the towed car Michael Wohl posted an update describing his experience.

Wohl, who parked at the Sun Center parking lot Feb. 10, said he left his car to have dinner at Boca Fiesta. When he returned, his car was gone.

Wohl discovered shorty after that Boca Fiesta and the Hippodrome State Theatre actually aren’t part of the Sun Center, and that there are signs in the complex indicating so. Even though he thinks the signs need to be larger and clearer, he accepted the fact that he was legally towed.

It was something else that bothered Wohl.

After walking half a mile to Ultimate Towing and paying a $100 fee to retrieve his car, Wohl said he went back to the Sun Center parking lot to warn people that Boca Fiesta was not part of the Sun Center. What he saw while he was there is what angered him.

“Ultimate Towing has a spotter to go out there and record you walking off the property so that they have evidence,” Wohl said. “The tow trucks are literally right around the corner.”

He said he saw six cars get towed during the 20 minutes he was there, and each car was towed within 5 minutes of the vehicles owner walking away.

“I feel it’s predatory towing in the sense that if they truly didn’t want people to park at the Sun Center, they would warn them and say, as they’re getting out of their car: ‘hey, if you’re going to Boca don’t park here,’” Wohl said. “But they don’t do that. They let you walk away, they take pictures of you walking away, and they call a tow truck right around the corner and they haul it off, and it’s an easy 100 bucks.”

Joe Lin, manager of Liquid Ginger, a restaurant located in the Sun Center, said he thinks Ultimate Towing could be a bit more lenient.

“The issue that I face is when customers are coming here and then they walk up to the Hippodrome steps and get their car towed, because they’re just looking at what time the show starts, and they come back here and their car’s gone,” Lin said.

“I’ve had quite a few customers say they’re not coming back,” Lin said.

City Commissioner Harvey Budd is also upset over the Ultimate Towing issue, and thinks some sort of procedure of redress should be in order for when Ultimate Towing makes a mistake.

“I was towed from a place where I was legally allowed to park,” Budd said. “It was a misunderstanding. I went to the owner, tried to get my money back, and of course they laugh at you.”

Stephen O’Grady, the owner of Ultimate Towing, said impound towing is a contentious business, but that it’s necessary to protect the rights of private property owners.

O’Grady also said the practices of his company were legal, and that Ultimate Towing does it’s job in serving the community.

“My company has been the subject of approximately 600 investigations by law enforcement agencies,” O’Grady said. “The Gainesville Police Department has a full-time division to investigate towing complaints. The State Attorney’s Office has investigated my company – the Florida Highway Patrol, The Alachua County Sheriff’s Office. They have never found that I, or my company, has committed a crime ever, under my ownership.”

Syama Allard is a reporter for WUFT news. He can be reached at 352-256-8749 and at sallard108@ufl.edu
@Syama Allard
Previous Mar. 3, 2017: Afternoon News In 90
Next New Study Shows Allergy Relief Through Probiotics