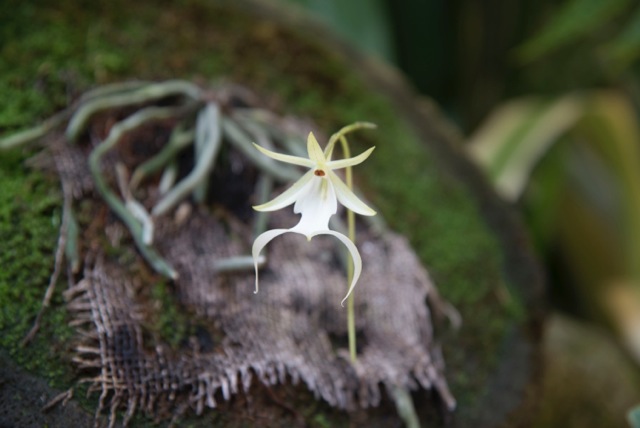 This flowering ghost orchid, or Dendrophylax lindenii, has successfully been transferred to the butterfly rainforest at the Florida Museum of Natural History. The transfer included stapling burlap with the orchid attached, to a piece of wood. The burlap will biodegrade eventually and the orchid will grow into the wood, according to Michael Kane.

When it’s not blooming, the roots of the ghost orchid can blend into a tree trunk in the swamps of South Florida, leaving no trace of the delicate white flower that inspires its name.

This rare orchid is the inspiration for Susan Orlean’s book,“The Orchid Thief,” and a movie starring Nicholas Cage, “Adaptation.” The book references one of the several reasons why the orchid is endangered: poaching and selling of the native Florida plant illegally.

The ghost orchid, or Dendrophylax lindenii, typically flowers for about one or two weeks once a year. The Butterfly Rainforest at the Florida Museum of Natural History currently has two blooming ghost orchids, which have brought interested and recurring visitors since they first flowered on July 6. The second orchid bloomed on Thursday.

The museum has 10 orchids in the rainforest that were donated by researchers at UF/IFAS, according to Ryan Fessenden, assistant manager of the butterfly rainforest.

Keith Curry-Pochy has worked at the Florida Museum of Natural History’s butterfly rainforest for about two months. Until last week, he had no idea he was working alongside the same plant he had trekked chest-deep through swamps to glimpse from a distance.

“Especially with swamps, they have such a stereotype [for] being such a creepy place with nothing really good there,” he said. “And there’s these little gems in there and the orchid is one of those little gems.”

Michael Kane, a UF environmental horticulture professor, said the ghost orchid is endangered because of loss of habitat, lack of pollinators and poaching.

The orchid is found naturally in only three counties in Florida, and it is believed only one type of moth can pollinate it, he said.

For about four years, Kane and former graduate student Hoang Nguyen, who graduated in May, have been working on growing these seeds that were mechanically pollinated by Larry Richardson from the U.S. Fish and Wildlife Service. They currently have thousands of mature seedlings in the UF/IFAS lab, compared to 2,000 growing in Florida in the wild.

The speed at which the orchid has flowered in the rainforest habitat is incredible and proves the transfer has been successful, Kane said.

Curry-Pochy said he sent text messages to his friends when the orchid started flowering. Several museum visitors have shared his enthusiasm and have returned multiple times to show the orchid to their friends, he said.

There was one visitor wearing an ‘I heart orchids’ shirt with a photo of the ghost orchid inside the heart, according to Curry-Pochy.

Fessenden, who has worked for the museum for nine years, said he did not hesitate when he was offered 10 of these orchids for the butterfly rainforest at the Florida Museum.

The orchids were transferred to the butterfly rainforest in March. The transfer process included stapling strips of burlap, with the orchids growing on them, to trees that were optimal for the plant needs.

Fessenden said when people come to the rainforest and see the orchid and then tell their friends, it’s a step closer to more appreciation.

“I’ve found that excitement and passion is very much a contagious thing,” Fessenden said.

Fessenden and Curry-Pochy share a concern that nature in Florida is underappreciated. Cultivating interest through the blooming ghost orchids in their exhibit is a small step towards changing that, Curry-Pochy said.

“You get people to care about one thing,” Curry-Pochy said. “Then it’s like, well, we have to save the whole environment to save this. And so the ghost orchid can be the ‘this.’”