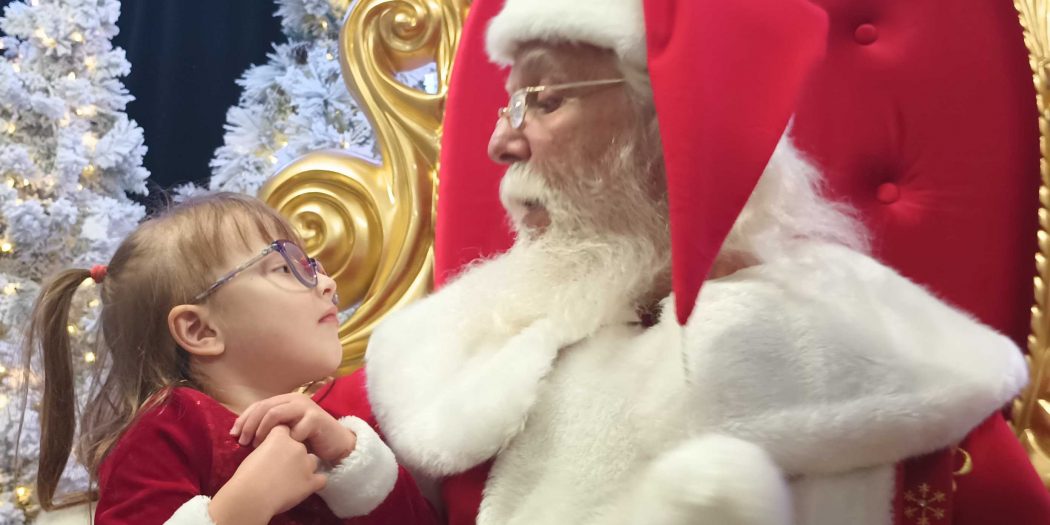 Serenity Braden, 4, connects with Santa Keith Carson at the World Equestrian Center in Ocala on Friday. Her grandmother, Christina Oestreich, said such moments are especially important for children living with a disability. (Sandra McDonald/WUFT News)

‘The red suit picks you’: Santa Clauses prepare for the renewed holiday crush

Seven-year-old Ranessamae Rinehart could not contain her excitement after sitting on Santa’s lap at the Ocala Town Square gazebo recently. She asked Santa for Legos bricks and sparkly shoes with bows on them.

As several other families waited in line for their turn to meet the old man with the red suit and white beard, he told the girl he would let his elves know what she wanted.

With that, Ranessamae bounced from his lap and watched as her uncles, Jacob Cape, 14, and Jadaan Cape, 12, made their requests. The older boy surprised Santa by asking for a much more expensive gift: a dirt bike. The jolly one took note but made no promises.

“I love him,” Ranessamae said as she hugged her grandmother, April Cape, right after, as Santa greeted another family behind theirs.

“Seeing there’s so much belief,” April Cape said when asked for the best part of the brief encounter, which also included a family portrait with Santa and Mrs. Claus.

After a two-year respite due to the pandemic, Florida families are once again enjoying being with Santa – up close and personal, and not separated by social distancing.

And just as much, an industry of professional Santas are happy to be back in the business of bringing smiles to young and old alike, including children asking in public for things their families cannot afford, and families able to pay for private visits to their homes.

“Any time I can provide that smile to any child and any mother that is needing it – and any father – that is what I like to do,” Tony Brown, 64, the Santa who brought so much joy to Ranessamae, said the day after meeting the girl on the town square.

He and Mrs. Clause (Yvette Marin, 63) arrived at the gazebo on their reindeer – a decorated white trike motorcycle. They recently moved to Ocala from Kentucky and seized the Santa on the Square event as a chance to integrate better into the local community.

Brown, a military veteran of 20 years and retired truck driver, said he started his Santa career eight years ago in New York by dressing up a red motorcycle and bringing candy to first responders and other essential workers on Christmas Eve.

Santa on the Square has existed for more over 20 years, according to LaToya Artis, Ocala’s therapeutic and senior recreation program supervisor. In December 2020, Artis said, Santa saw more than 1,500 families on the square – because no other Santa experience was open.

“It is a breath of fresh air,” said of the back to normal experience.

For more than 125 years, professional Santas have bleached their beards, polished their boots and rounded their bellies ahead of the Christmas season.

But for Santa Keith, Christmas lasts all year long.

Keith Carson, 65, a retired police officer, has portrayed Santa around Ocala for 17 years. He started the Believe in Santa Foundation, a nonprofit placing the jolly one wherever and whenever a child or family needs him most – and not just during the holidays.

Preparations typically start in September for Carson, though this year saw delays after Hurricane Ian devastated parts of Florida. That’s because he spent about a month visiting with families and children who had lost everything in Ian’s wake.

Carson credits his Santa debut to another Claus who canceled a week ahead of a big holiday event. Panic set in, he said, as the organizers scrambled to find a solution.

“They would have picked you if you had raised your hand,” he told a reporter.

He volunteered and within a week, he’d gathered all the materials to become Santa.

When it was over, he realized he loved every minute of it.

Carson started doing paid personal appearances to fund the upkeep of his suit, among other related things, so that all money donated to the foundation would go to needy families.

A woman once told him during a performance that he was too skinny to be Santa Claus.

“The reality is, to a child, you’re already larger than life,” he said. “You’re Santa Claus.”

Santa visits outside of the holidays are easier in Florida than other parts of the country.

“When you walk into a hospital in March,” Carson said, “and someone says, ‘Santa, what are you doing here?’ The answer is, ‘Well, you know the average temperature in the North Pole is 40 below zero. Where would you go on vacation?’”

Preparing for the holidays is a step-by-step process and Carson’s checklist includes cleaning his gloves, boots and 16 different custom-made outfits. People expect the Three B’s when they see Santa: the Belt, the Boots and the Beard.

“I save the eyebrows for last,” Carson said, motioning to his black eyebrows, and then his bleached beard, which he maintains throughout the year. “It’s the only thing that makes me look somewhat normal as opposed to looking like a 75, 80-year-old man,” he said.

Santa Rex Ray, 68, of Washington County, is working the entire season at Bass Pro Shops in Tallahassee. Ray fondly recalls moments he’s had with children and adults throughout his 20-year career. He first put on the red suit at 16 as a gas station attendant, at his boss’ behest.

“We have a saying in the industry: ‘You don’t pick the red suit – the red suit picks you,’ said Ray, who was inducted into the International Santa Hall of Fame in 2018, by a review committee which celebrates the best and brightest of professional Santas.

It’s not all milk and cookies, as being Santa is as much of a business in real life as it is in the North Pole. Ray used to perform home visits, but it was a lot more work than it might seem.

“It’s a lot of marketing, it’s a lot of time on the road, on the phone,” he said. “You have to make all the appointments, you have to get all the schedules set up, gather all the information about who is going to be at the house.”

Santa suits can also get expensive. Ray said he and many of his colleagues have put thousands of dollars into their suits and accessories. Santas can earn more than $150 an hour to greet children and take photos during November and December at shopping centers, he said.

Before she died last year, Ray’s wife Darleen worked as a seamstress and created the 22 suits he has alongside other Christmas costumes for elves, Mrs. Clauses and Santa Clauses.

Santas use conventions, schools and Facebook groups to refine and improve their trade between holidays. They are sponsored by organizations such as the Arizona-based International Brotherhood of Real Bearded Santas and Palm Tree Santas in Florida.

School4Santas, the school Ray attended, was started by Santa Tim Connaghan of New York. Connaghan, 75, has handed over diplomas to about 4,800 Santas. Entering his 54th year as a Santa, his beard is genuine today. His first was made of shaving cream while in Vietnam.

Connaghan also runs the Red Suit Survey, a yearly survey sent to Santas that ask questions from what cookie they prefer to COVID-19 vaccination status.

The average Santa, according to his 2021 survey results, is 66 years old, white, about 275 pounds, married, and was able to work through the pandemic with protective barriers, masks and social distancing. Eighty-two percent of responding Santas were vaccinated and 91% had real beards. Their favorite cookie is still chocolate chip (42%), with oatmeal raisin in second (19%).

Forty-one percent reported they had diabetes.

The suit, Connaghan said, helps make the Santa: “Doesn’t matter man, woman, Black, Hispanic, whatever – you’re Santa for that moment with the kids and they create the magic.”

Race and ethnicity matters when it comes to professional Santas, according to Robert Gresham IV, who aims to prove it each year across Jacksonville as Black Santa Jax.

Gresham and his wife Patricia, both 40, said they jingled a few bells the wrong way when they started Black Santa Jax nine years ago. Pushback, they said, centered on the idea that a Black Santa was unnecessary in a world where Santa had historically been white.

The families they served stuck up for them, they said, and struck back against any critics.

Gresham is principal of K-8 Icon Preparatory School in Jacksonville. He remembers going to the Gateway Mall as a child with his younger sister to see a Black Santa. After the mall’s decline in the 1990’s, that part of Christmas for local Black children was gone.

His wife, who grew up in Tampa, said he was the first Black Santa she’d ever seen.

His wife acts as a manager, visionary, bookkeeper and photographer when she isn’t an elementary school math teacher. They go all out for Christmas every year to provide the best possible experience for their families; they brand themselves as the premier Santa of the South.

In December 2020, Gresham said, the COVID-19 pandemic almost shut Black Santa Jax down. Undeterred, they equipped face shields and created the best experience they could for families trying to celebrate the holidays however possible. They turned a 4,000 square foot studio into a winter wonderland, with a sleigh created by high school students.

“It was probably the best season, the most rewarding season we’ve ever had,” he said.

Sandra is a reporter for WUFT News who can be reached by calling 352-392-6397 or emailing news@wuft.org.
Previous The Point, Dec. 19, 2022: Paying the price: GRU customers respond to high bills
Next Florida airports expected to set records during holidays