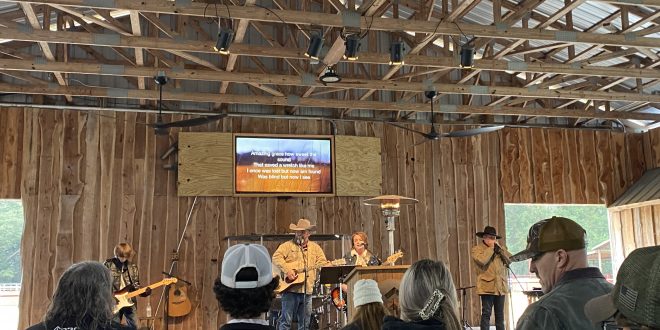 A Williston cowboy church will host a hearty Thanksgiving meal on Thursday for people who are in need or missing company for the holiday.

Rafter Cross Cowboy Church at 4631 NE 162nd Court will put on the sit-down dinner from 2 p.m. to 4 p.m. for “absolutely anyone,” its organizers say.

Nichole Parker, 39, of Dunnellon is organizing the projected 200-person dinner with her husband Adam Parker and church members Patricia Wright and Jacob Wright.

As a mother of four children, she said the church’s goal for the Thanksgiving dinner is to “feed and bless people in need or who have family out of state, and let them have a place to go so they feel like family here.”

She said the event’s food has been donated by a local food company Patricia Wright may not want named, but church members will bring desserts to ensure “people can grab a piece of pie and hang out” in case the food runs out.

“It is really hard when it’s Thanksgiving and you’re home alone.

“We used to volunteer at different places when my son was little on Thanksgiving day, and it was all grab-and-go.

“Which is great, but if they’re alone, then they’re grabbing to go back home alone, so we wanted to do it where it’s sit-down.”

“In this church, there is always somebody giving. They just need to know. You just have to reach out.

“They do that all the time, they’ll stand up there and say, ‘Hey, we’ve got this family that is in need.’ And it’s just like that, it happens.”

She said church members give major checks even before a sermon ends to help people in need or fund disaster relief efforts.

“People always go overboard. There’s a good bunch of people here that have a willing heart.”

“We’ve got bikers and hippies. We’ve got everybody. You never know who is going to be out here.”

There are about 10 cowboy churches in Florida, but only three have an arena on-site like Rafter Cross.

The church uses its arena for community practices Monday, Tuesday and Thursday evenings, and for its summer Cowboy Camps for boys and girls ages 8 to 18. The church also hosts a weekly dinner and bible study Wednesday nights.

Billy Keith said he never wants the church to be “a place that’s only open on Sunday.”

He said having the church centered around cowboy culture with arena practices several days of the week has “changed a lot of people’s lives for good.

“A lot of people that don’t have family found family here.”

Ginny Keith, Billy Keith’s wife of nearly 30 years and the mother of their children Will Keith, 8, and Emma Grace Keith, 22, said the church’s motto is “Come as you are.”

She said when the church holds rodeo events and “there’s beer cans in the parking lot, then we know the right people were here.”

University of Florida alumna Linda Jackson, 69, said she had been “floating around traditional churches” all her life until her sister’s boyfriend introduced her to Rafter Cross about five years ago.

“I’m cowboy way back,” she said. “I never felt at home or comfortable at those churches.

“I’ve never been happy anywhere I went. I ended up being happy [at Rafter Cross], and I’ve been here ever since.”

Nichole Parker said there is an unexplainable joy at the church.

“The moment you come in here, you’re not a stranger.”

Bobbi Boynton, whose husband Steve Boynton is on the church’s security team, said the two have been coming to Rafter Cross since they moved from Palm Beach County to Ocala about six years ago.

She said the church’s community events and welcoming, down-to-earth members keep her eager to drive over 30 minutes there every week.

“My horse days are over, but we support everything they’re doing,” she said.

Kemper is a reporter for WUFT News who can be reached by calling 352-392-6397 or emailing news@wuft.org.
Previous The Point, Nov. 23, 2022: SBAC swears in first all-female board
Next Homeless, broken woman struck by sheriff’s deputy in crash seeks $15 million from Florida lawmakers