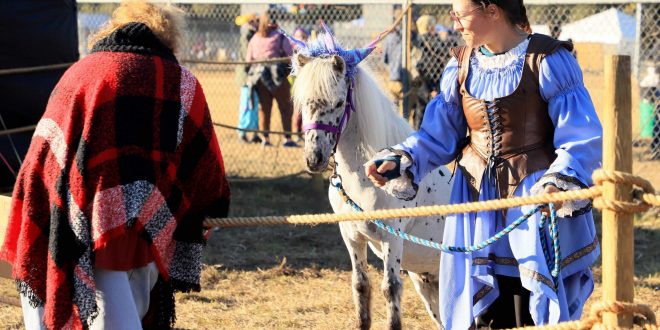 Miles Field stands tall at the center of the medieval marketplace in his handmade knight cosplay. His painted athletic padding gleams like steel plates as he poses for photos with other performers.

Two years after the COVID-19 pandemic forced Gainesville’s Hoggetowne Medieval Faire to suspend activities, the medieval festival with costumed performers, artisans and craftspeople has returned outdoors. It will be open to the public through this weekend.

“It still has the same vibe,” Field said. “I really like the people, I like the vendors and I love everyone who runs it. They are always so in character and so friendly.”

The medieval fair opened its castle gates Jan. 15 in a new location after going virtual in 2021 due to the pandemic. The three-weekend event relocated from the Alachua County Fairgrounds to a temporary location at the former YMCA sports facility at 9409 SW Archer Road.

Friendly chatter filled the marketplace of Hoggetowne on opening weekend as merchants sold cloaks, blacksmiths forged swords and bards entertained newcomers with song and dance — a sight passersby and organizers, including event coordinator Sunshine Andrei, said they had missed after the fair’s transition to online last year.

Rows of tents line the castle grounds as performers dressed in silk smocks and intricately designed corsets amble about the area. Vendors stand on planks to entice guests, cast as villagers, for a bite to eat and an ale to wash it down. Near the grassy fields, knights fight in a live chess game, where people move as pieces, in an epic retelling of Robin Hood lost in Hoggetowne.

Two hands grip a longsword, distinguishing the crusaders from the guards and nobles on the chessboard. The three live chessboard performances combine to tell a story; Sir Hubert Walter, played by Scott West, 38, brandishes his weapon as he readies for battle.

“It’s as much of an adrenaline rush as riding any roller coaster, particularly when you’re in the moment, in the middle of stage combat and you’re trying to remember what move comes next, where you need to move and what direction you need to be facing,” West said.

West and his wife, Miranda West, 38, have been performing at the fair for around 20 years. Miranda said when the event moved online last year, she missed the people she had gotten to know in her time working at the fair.

“There’s a lot of performers that we’ve seen year after year after year, and you just kind of know them at this point, and it’s nice to see them and to see that they’re still there and they’re still going,” Miranda said. “Kind of feels a little bit closer to whatever the new normal is going to be.”

Andrei said the free virtual event was a combination of live performances and prerecorded content with and without live commentary. The live event charges $20 for adults and $10 for youth for admission.

“It was not the same, but you can’t replicate a live event like this online,” Andrei said. “The goal was just to keep it alive for a year.”

West said there were times throughout the rehearsal process when he didn’t know if the fair would happen.

“My favorite part has just been that it’s happening — that we’re getting to see old friends again,” he said. “Rather than the constant anxiety of [wondering] ‘Where are we going to be this year? Is it even going to happen this year because we can’t find a place?’”

The event welcomed more than 4,000 villagers on the first day of the fair Jan.15, which is around the same number of participants who attended the opening day virtual livestream in 2020.

“Whenever shows like this change location, it usually takes a huge hit on attendees,” Andrei said. “For us to change locations, open a weekend earlier than we normally do, [and still] have over 4,000 attendees on day one is a huge success.”

The Alachua County Board of County Commissioners approved a permit in December for organizers to use the almost 114 acres of the former YMCA sports facility after the old fairgrounds site near the Gainesville Regional Airport was leased in 2021 by the U.S. Army Reserve for the next 50 years. The fairgrounds were moved to the Alachua County Agriculture and Equestrian Center. But 37 acres was too small a space to host the fair.

The new site may not have the electronic bells and whistles of the old fairgrounds, but it follows the medieval theme with human-powered rides. The merchants and performers are also required to dress in medieval or renaissance attire to bring the medieval village to life.

A crown fit for a queen bejewels the top of Allison Newell’s head. The University of Florida theater student, 21, wanders inside the castle walls in her red satin dress adorned with black lace. At the fair, her title is Queen Eleanor of Aquitaine.

Children walk up to her to ask for her trading card, but before she gives it to them, she asks them a question of her own, “What’s your name princess?”

In response, the girl grins at the word princess as she twirls in her dress.

Moments like these warm Newell’s soul, she said. For her, the fair is an escape.

“You take a break from reality, and you come enjoy the world of princesses and princes and fairies and kings and queens,” Newell said. “You get to drink a little, you get to watch jousting, you get to watch some battle chess and interact with characters.”

The City of Gainesville Parks, Recreation and Cultural Affairs Department will host the event on Saturday and Sunday from 9:30 a.m. to 5 p.m., along with a family day on Friday from 9 a.m. to 4 p.m.

Isabella is a reporter for WUFT News who can be reached by calling 352-392-6397 or emailing news@wuft.org.
Previous Parking changes bring challenges in downtown Gainesville
Next Pandemic-related worker shortages are delaying waste collection in Gainesville