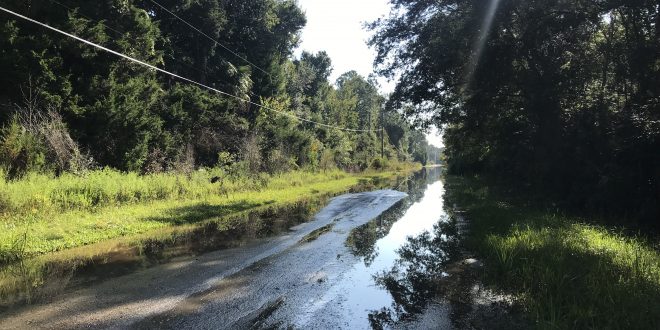 The middle section of Mayo Drive completely flooded on Sept. 6. There hadn’t been rain since the week before, according to Gary Bartell. (Amy Galo/WUFT News)

When Crystal River resident David Carpenter left for work at 4 a.m. on the first morning of September, the water flooding the entrance to his neighborhood was about 3 inches deep.

When he returned 12 hours later, he said the water had risen to over 1 foot.

“I almost couldn’t get my car through it safely,” Carpenter said.

Mayo Drive is the only way in or out for residents living in Carpenter’s neighborhood. Though residents say they’ve experienced flooding in the past, now it’s on a whole new level.

“It is flooding so much worse this year since the incomplete construction on U.S. 19,” said Robin Peake, a homeowner who has lived on Mayo Drive for 30 years. “The road has always flooded, but small, not as much ever as this year.”

Two projects to widen U.S. Highway 19 began in the neighboring towns of Crystal River City and Homosassa in 2016 and 2018, respectively. One of them was meant to widen the stretch of the road from West Green Acres Street to South Jump Court, and the other from Jump Court to Fort Island Trail. Both were supposed to expand from four to six lanes.

On July 28, construction on these sites came to a halt when D.A.B. Constructors, Inc. left the projects. D.A.B. submitted a letter to the department stating that it was financially unable to complete the work as the prime contractor, according to Florida Department of Transportation (FDOT) spokesperson Kristen Carson.

Residents say flooding on Mayo Drive has only gotten worse since then, resulting in more potholes and other dangers to drivers. Recently, Carpenter said a few people from his neighborhood got together and put five yards of road base rock into a pothole about eight inches wide and 10 to 12 feet long that had developed on Mayo Drive.

Carson said FDOT is addressing flooding issues related to U.S. 19 by installing enhanced water drainage systems to collect and treat stormwater runoff coming from the road. These systems are designed to relocate water that would otherwise just sit on the pavement, an impervious surface that doesn’t absorb rainfall.

“This is the first time any flooding of Mayo Drive has been brought to our attention,” Carson said.

Following a field review conducted by FDOT, Carson said that the flooded area on Mayo Drive is not being affected by the U.S. 19 projects.

“The area that is flooding is well outside the right of way… and the properties located immediately adjacent to the right of way on U.S. 19 are significantly higher than the proposed construction,” she said.

Residents are not only concerned about increased flooding in their neighborhoods. They’re also worried about how FDOT’s drainage systems are affecting the nearby Halls River.

“I was born and raised swimming in the [Halls] River,” said Gary Bartell Jr., owner of the Ozello Keys Marina in Crystal River.

Every day before and after school, he would jump into the canal next to his parents’ house. Now, he says his 4-year-old son can’t even touch the water because it’s been polluted by runoff from the U.S. 19 project.

Bartell currently leads the community initiative Stand Up 4 the Outstanding, with over 1,000 members. The group aims to stop the turbid, or dirty, water drainage into the Halls River from the highway projects.

The first complaint submitted by the community regarding runoff into the Halls River was in 2017, back when the project was just beginning, and the first retention pond was built to handle drainage from the roadwork. At that point, the river water became a sandy color.

“We were told by D.A.B., ‘Well, this river is so close to a road construction site, things like this are going to happen, and we’ll do our best to contain it,’” Bartell said. “We didn’t realize the issue at hand until D.A.B. actually quit.”

There are now four ponds that collect water through underground culvert pipes. They all drain to the river.

Bartell said when the company left this summer, it took all the pumps it was using to decrease the amount of runoff going into the Halls River with it.

“That’s when we found out, ‘Oh my God, this is a purposely done system to drain Pond 4,’” said Bartell. “This wasn’t just ‘accidents happen.’ It was purposely designed this way [by FDOT].”

The Halls River, which forms part of the Homosassa River system, is classified as an Outstanding Florida Water. This means it is granted special protection due to its natural attributes by the Florida Department of Environmental Protection (FDEP).

The water that forms part of this river system also eventually drains into the Gulf of Mexico.

“The Halls River used to be a pristine, crystal-clear blue,” Bartell said. “It was a magazine type of imagery.”

Today, the water traveling through the culvert is a brown, coffee color. Oil and other substances can be seen floating at the surface. On a recent September morning, a dead blue gill was at the surface of Pond C, right in the middle of one of FDOT’s filtration systems. These filtration systems consist of black tarp, wooden poles and sometimes hay.

Bartell said the brown color is an improvement from the desert-sand-looking water he saw back in July. He said he is happy to see FDOT implementing new filtration technology and erosion control devices in the ponds, calling these a major progress.

But heavy Florida rainfall has resulted in some of these control devices failing. FDOT, Southwest Florida Water Management District and FDEP were out repairing some of these devices on Sept. 2.

In an email to Bartell, the FDOT District 7 Secretary David Gwynn said the basin had seen a reported 60 inches of rain in the last month alone. The abundance of rain combined with the loss of U.S. 19 contractors worsened the issue.

“We are ultimately responsible for the performance of the system, and we are working hard to improve the erosion control measures and will continue to do so,” Gwynn said in his email.

The water management district is also working with local stakeholders to try to clean up the river. According to Susanna Martinez Tarokh, public information officer for the Southwest Florida Water Management District, the company has worked with the Springs Coast Steering Committee to develop a Surface Water Improvement Plan for the Homosassa River watershed.

This plan includes long-term goals for restoration and management of the Halls River and other bodies of water that form part of the Homosassa River watershed. One project specifically proposes treating the runoff water that currently flows with oil and debris from U.S.19.

Though Bartell appreciates increased interest in the issue, he thinks more should be done.

He and other members of Stand Up 4 the Outstanding want this system to change now that construction is halted. They believe it’s the perfect time to act.

Bartell said FDOT is already talking about bringing in a company to come desilt the canals. He believes this is great, so long as the process doesn’t need to be repeated in another year.

“If they’re going to go through those measures, why not just stop the flow now?” Bartell said.

Amy is a reporter for WUFT News who can be reached by calling 352-392-6397 or emailing news@wuft.org.
Previous The Point, Sept. 21, 2021: Florida Is Beginning The Process Of Redrawing Its Electoral Districts
Next RTS Bus Riders Are Struggling To Navigate Detours (But There’s An App For That)

In the wake of the Archer solar controversy, Alachua County commissioners vote to buffer future facilities

The commissioners met this week for a special meeting to discuss the county’s solar policies. The conversation quickly centered around the tree coverage and buffer of these facilities.