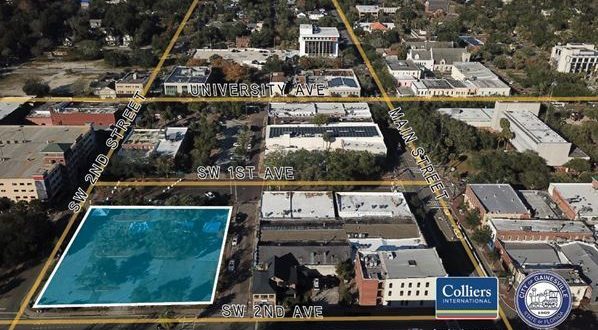 This map shows a layout of downtown Gainesville and the area known as Lot 10, the space filled in blue. (Rendering courtesy of Colliers International)

May 4, 2021 Business and development, Government and politics

With a new Hyatt Place hotel set to begin construction in downtown Gainesville in January 2022, many have turned their attention to Lot 10, a nondescript parking lot in the city’s center that has stirred the emotions of city officials, local business owners, and community members for nearly a decade.

City commissioners will once again consider development proposals for Lot 10 during their meeting on Thursday, said spokesperson Rossana Passaniti.

Located on 100 SW First Ave., across the street from Loosey’s, Lot 10 has seen numerous development plans come and go. More than 10 years ago, city commissioners approved the project known as Gainesville Green, which fell apart due to the 2008 financial crisis. Later, an agreement between the city and Atlanta-based developer Nim Patel to build a $56 million hotel was cancelled after his company missed deadlines to give the city $125,000 and file necessary paperwork.

“The mission was to shepherd the process to the right respondent, but it failed,” City Commissioner Harvey Ward said.

Two years ago, Gainesville and EDA Consultants Inc., planned to buy the land with one goal in mind. They wanted to build a six-story, 136-room Hyatt Place hotel. That agreement failed, too.

While the plan to build a Hyatt Place hotel on Lot 10 was halted, the hotel chain did secure another site in downtown Gainesville, across from The Hippodrome Theatre.

A groundbreaking ceremony for the $32.8 million Hyatt Place hotel was held April 16. The development will include 145 guestrooms and 40 studio-loft apartments.

Mike Warrant of Gainesville-based AMJ Group Inc. and Magnolia Street Hospitality company is the principal investor in the Hyatt Place. Warren’s company has also submitted a bid to develop Lot 10, he said.

Recently, when earlier plans to develop Lot 10 failed, Colliers International, a real estate agency was hired by the city to receive proposals.

The expectation at the highest and best offer, would be “retail, office, hotel or a hotel/condominium,” said Rory Causseaux, associate director of Colliers.

Erik Bredfeldt, the city’s economic development director, currently manages the contract with Colliers International. He said he has been involved in this project for the last five to six years and wants to see something finally come together.

“It will help develop the economy,” said Bredfeldt, as well as “activate downtown Gainesville and serve as an employer.”

Local business owners who are most likely to be impacted by the development of Lot 10 have also watched proposals come and go since 2007.

“There have been four bids to put hotels there; every time it’s fallen through,” said Anthony Rue, owner of Volta Coffee, Tea & Chocolate, which is adjacent to Lot 10. “The lot has been wasted,” he said, adding that he would like to see a hotel built on the site.

But some local business owners have concerns about hotel development in downtown Gainesville.

Speaking about the new Hyatt Place development, Mike Palmer, chief executive of the rock climbing company The Knot, said he is concerned that low-income areas of the city will not see the benefits from another hotel. “Sure it might bring jobs, but is it going to bring the types of jobs that will benefit east Gainesville?” he said.

Palmer conveyed concerns about retaining the city’s unique characteristics. “I’m not opposed to the development, but I want to see developers be more responsible and sensitive,” Palmer said.

Jacob Ihde, owner of Boca Fiesta, a restaurant located near the site of the new Hyatt Place said in an email that he would like to see an increase in patrons downtown “while still maintaining the special and unique atmosphere that everyone who lives in Gainesville has grown to love.”

Ihde said that while he expects that construction could be disruptive, “if they are committed to becoming an integrated part of the Gainesville community, I think that the long-term benefits could outweigh any negative short-term effects of our city.”

Pat Lavery, facility and events manager at High Dive, a live-music venue across the street from Lot 10 expressed mixed feelings, “I’m torn on it,” Lavery said. “Development, in theory, can be good for existing businesses. New developments push out local businesses. I think there’s always a possibility of this happening.”

Briana is a reporter for WUFT News who can be reached by calling 352-392-6397 or emailing news@wuft.org.
Previous CDC Survey: Distrust Likely To Keep Majority Of Florida Prisoners From Getting COVID-19 Vaccine
Next The Point, May 4, 2021: Florida Governor Ends Local Coronavirus Protections