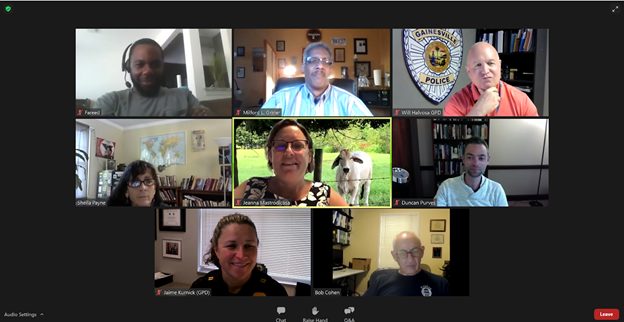 The Gainesville Police Advisory Council on Wednesday discussed ways to reduce overcrowding at youth-oriented entertainment venues such as the T.B. McPherson Center and the Martin Luther King Jr. Multipurpose Center, as well as arrest rates among youth in the city.

Overall crime rates have decreased by 8.99% over the past year, but there have been more sexual batteries and robberies, Police Chief Tony Jones told the council during a virtual meeting.

Jones also said that GPD arrested a suspect on Tuesday in connection to the killing of Thomas Smith, who was found dead on Jan. 7 at a car wash on 912 E. University Ave.

Seven thousand residents from the city and surrounding communities attended events on Easter Sunday at the McPherson and King centers, the police chief said. While there were no acts of violence, nearby residents complained about the noise and resulting trash, he said.

The city has developed no resolutions for such overcrowding, Jones said, making it necessary for more GPD officers to be available for crowd control, with fewer ones on patrol elsewhere.

“This is a city problem, this is a community problem – this is not a Gainesville Police Department problem,” Jones said.

Council member Ernest Walker and chair Fareed Johnson suggested developing an open field within the city limits, similar to a fairground, for young people to congregate.

“They’re not asking for any type of equipment or anything like that, just the space and opportunity to express themselves and be who they are,” Johnson said.

Walker also suggested designating a crew of 10-15 volunteers to collect trash after such events.

In another matter, Will Halvosa, GPD’s disproportionate minority contact coordinator, led the council in a discussion about youth arrest rates.

Black youth were arrested at higher rates than white ones in 2012 and 2013, when GPD had the highest percentages among police in the state’s 67 counties. Since then, GPD’s youth arrests have dropped by 74% and GPD has dropped to fourth place, Halvosa said.

Out of 158 juvenile arrests in 2020, 93% were Black youth, but those numbers are inflated, he said. That’s because when a young person is arrested while on probation, it counts as two separate arrests – one for the violation and one for the new offense. In addition, Halvosa said, if a young person does more than one crime in a single night, it multiplies the number of arrests.

“We arrest a young man for breaking into 15 cars one night, that counts as 15 arrests,” he said.

When advisory council member Duncan Purves asked what GPD can do to reduce this, Halvosa said increasing trauma and implicit bias training as well as more police dialogue with at-risk youth. Walker added that additional mentorship programs for children could be beneficial.

Sharla Head coordinates for GPD and the local state attorney’s office a “deflection program” designed to prevent small infractions from ending up on someone’s criminal record. Noting that she looks at education levels, employment and homelessness to determine eligibility, Head said two-thirds of the 47 offenders recommended to the program are white.

Council member Sheila Payne said she was glad GPD has the program and suggested a uniform system be developed when determining which offenders get recommended.

“It’d be cool, if everyone could be deflected, based on an assessment system,” Payne said.

Council member Bob Cohen and Johnson said all such complaints should be taken seriously, and Cohen said council members should also be able to help someone file one, if necessary.

“That’s one of our functions, to hold their hand and shown them how to do a complaint if they feel it’s necessary,” he said. “Every pressure cooker needs a safety valve.”

Kalia is a reporter for WUFT News who can be reached by calling 352-392-6397 or emailing news@wuft.org.
Previous From Wi-Fi Hotspots To Language Learning, Alachua County Library District Serves Community During Pandemic
Next The Point, April 29, 2021: Medical Marijuana Bills Talk Halts As Public Employees Suffer Consequences of Legal Use