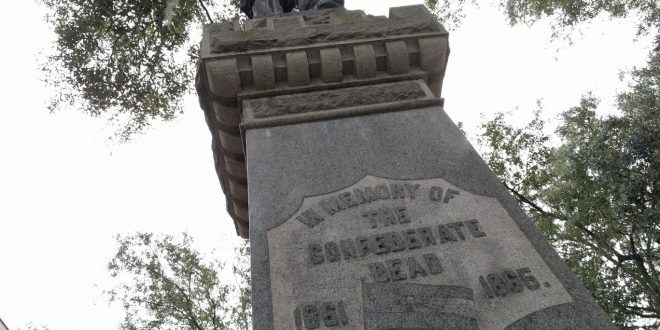 Florida, one of 11 former Confederate states, for decades had tributes across the state to its rebel heritage, including this statue that stood in downtown Gainesville until local outcry forced its removal in 2017. Now, some state lawmakers are working to remove three holidays that honored the Confederacy. (WUFT News file photo)

Dropping Confederate Holidays In Florida A Focus For Some Democrats

A trio of bills filed by Democrats in South Florida are taking aim at legal holidays honoring the Confederacy and its leaders.

The birthdays of Confederate General Robert E. Lee and Confederate President Jefferson Davis, as well as Confederate Memorial Day, have been legal holidays in Florida for more than a century. The bills – HB 6007, SB 1116 and SB 1302 – would see that 2021 is the final year they appear on the state calendar.

A tense summer punctuated by Black Lives Matter protests and the January assault on the Capitol by Confederate flag-bearing insurrectionists have pushed one of the 11 former Confederate states to once again consider reckoning with its past.

Some Democratic lawmakers are attempting to stop paying homage to the Confederacy in the form of these legal holidays in a session bound to be dominated by the COVID-19 conversation. Those efforts, though, may face pushback in the Republican-dominated Legislature that is focused on revitalizing the state’s economy.

Sen. Shevrin Jones, D-Miami Gardens, recognizes the challenge ahead. Jones sponsored a bill that would remove the three Confederate holidays from the state’s calendar. He said he understands pushing this through the legislature will prove difficult and there are other issues that likely will take precedence in Tallahassee.

Confederate Memorial Day is still a legal holiday in five states. In January, Lee’s birthday was celebrated the day after Martin Luther King Jr. Day was observed in Florida, highlighting the stark contrast of two of the eight historical birthdays the state celebrates.

Jones, who is Black, filed his bill in February, just over a month after the Jan. 6 insurrection at the Capitol where Confederate flags were carried by a mob protesting the results of the presidential election. He said the rise of Black Lives Matter protests in the summer following high-profile police killings of unarmed Black people elevated the need for change like what his bill proposes – the events of Jan. 6 are just a more recent example.

“What we experienced on that day, we, as a country, should not want to see that again,” said Jones, who also authored a resolution condemning white supremacy and white nationalism. “And we, as a state, should acknowledge that.”

There has been a palpable shift in actions to remove Confederate memorializations in the past year. The Southern Poverty Law Center’s “Whose Heritage?” project tracks the removal of Confederate symbols from public land and found more than 100 were taken down last year alone – double the number removed in the past four years. Six were in Florida.

“It speaks to the fact that hearts and minds can and are changing,” said Carrie Boyd, the center’s policy director.

Boyd commended bills by Sen. Lauren Book, D-Plantation, and Rep. Mike Grieco, D-Miami Beach, for taking on these holidays. Lee’s birthday is Jan. 19, Confederate Memorial Day is April 26, just four days before the session is scheduled to end, and Davis’ birthday is June 3.

There is precedent for Confederate monuments to be removed – though more than 1,700 remain nationwide – but previous measures to remove Confederate holidays from Florida’s calendar have failed.

In 2017, Book filed a bill that would remove only Confederate Memorial Day from the state’s calendar. Soon after, she withdrew it and revamped it to encompass Lee’s and Davis’ birthdays. It died in committee in 2018, as did its companion bill in the House.

Similarly to Jones, Book was reinvigorated by the Jan. 6 attack on the Capitol.

“As a state, we must underscore diversity and undercut tributes to Confederacy, which upheld the institution of slavery,” Book said in a statement.

The 2017 bill she filed followed the deadly Charlottesville, Virginia, riot led by white supremacists. Now, to Book, it is time once again to push legislation to remove these holidays. But this time around, Book extended her scope to Confederate symbols.

David McCallister strongly opposes legislation focused on taking away Confederate holidays and protections for its flag. He said he’s not alone in his outrage.

“This is going to waste a lot of time on a controversial bill, a very controversial bill,” said McCallister, the heritage operations chairman for the Florida Division of the Sons of Confederacy. “You’re taking away something that people had, and when the Legislature of Florida should be attending to more pressing, important issues.”

He said people around the state have told him they plan to attend committee hearings if any of the bills get that far. McCallister, though, hopes the committee chairs share his sentiment that Book’s, Grieco’s and Jones’ bills do not need to be heard.

All three bills have been referred to committees or subcommittees for consideration, although none has been subjected to a vote yet.

“(Adding a holiday), that would be perfectly fine,” he said. “But taking away a holiday just disturbs people.”

Difficult conversations stand between now and where lawmakers like Jones want Florida when it comes to remembering its Confederate history. He said residents trust their legislators to create bills that reflect the ideas of the future, even if those actions appear ceremonial.

“We’re more protective of a history than protective of people’s lives, of Black men being killed in the street by irresponsible police officers,” Jones said. “Protections have been put in place for them, but we’re gonna protect Confederate monuments?”

This story was produced by Fresh Take Florida, a news service of the University of Florida College of Journalism and Communications. The reporter can be reached at kwood@freshtakeflorida.com.

Kyle is a reporter for Fresh Take Florida, a news service of the University of Florida College of Journalism and Communications.
Previous Finders Not Keepers? Florida Considering Ban On Keeping Found Spacecraft Parts
Next March 9, 2021: Morning News In 90