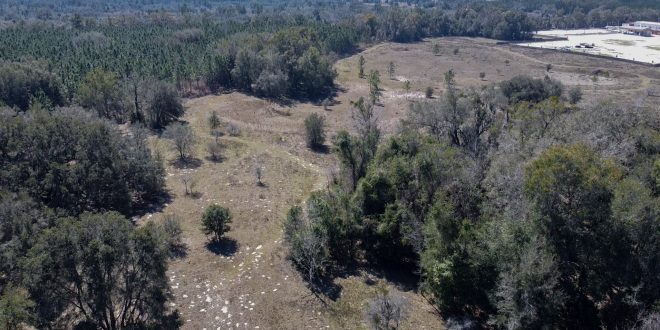 Oakmont, a high-end housing community in western Alachua County, will in May open an expansive new section of its neighborhood.

The only residents living on these plots, however, are tortoises.

In collaboration with the Florida Fish and Wildlife Commission, the Alachua County Environmental Protection Department as well as the University of Florida, ICI Homes’ reserve will provide a sanctuary for tortoises and other local wildlife, while serving as an amenity and educational opportunity for nearby residents.

The new reserve includes a two-mile walking trail, a bike rack and informational signage describing the local flora and fauna. ICI Homes plans to open the site on May 23.

“From the initial development of the community, we knew we wanted to make sure we held to our goal of increasing sustainability within the community,” said Joseph Blanco, division president for ICI Homes in its North Florida division.

The property used for the reserve has sat idly since construction began at Oakmont in 2014. ICI Homes was unable to build on the land due to the concentration of gopher tortoises, which the federal government has designated as a regionally threatened species.

Blanco said getting the permitting for the reserve was a long process, “…but it was worth it.”

He said ICI Homes prioritizes green spaces in its communities. The Oakmont Tortoise Reserve is the largest natural amenity near an ICI development.

“We wanted to make sure the buyers could use this space, connect with nature and learn a little bit more about it,” Blanco said, “So that’s why we started working with UF on the educational side.”

Mark Hostetler, a professor in the Department of Wildlife Ecology and Conservation at the University of Florida, worked with ICI to develop the educational signage planned for the reserve. Hostetler is an urban ecologist studying how to manage and design cities to conserve biodiversity.

“I’ve always been trying to raise the profile of natural remnants in and around cities… I think they’re incredibly important, not only for the wildlife species and habitats themselves, but also it gives people an opportunity to observe, and to get involved with their own natural heritage,” Hostetler said. “You know, you don’t see gopher tortoises every day.”

Hostetler said conserving open space on developments is crucial, as the land provides essential habitats for a wide variety of mammals and insects, including stopover habitat for migrating birds.

He said the informational signs on the property will highlight the animals’ natural history, as well as their connection between the reserve and the neighborhood. He said residents will be able to learn how they can improve their landscaping to attract pollinators and avoid invasive plant species.

“The best part is providing the educational opportunity for the for the residents,” Hostetler said. “People are surprised what can live right next door. They might think it’s just common species, like squirrels, but there can be so many more.”

Eric Godent, chief executive and president of the Greater Gainesville Chamber of Commerce, said he’s very excited about the combination of living, nature and educational spaces. He added that the reserve will provide educational opportunities for the elementary school under construction on an adjacent property.

“Even though it’s named for gopher tortoises, all the other species get to benefit,” Godet said. “It’s a combination of man and nature.”

Godet lives in the area and said he’s happy the developers are maintaining and investing in the reserve to make it more available to the community.

“I’m one of the few that’s been on those trails for years now, before the development ever came,” he said. “It’ll be great for more members of the community to see.”

Scott Costello, chief executive and co-founder of True North FL Inc., a consultant for ICI Homes, said many Oakmont residents have embraced the reserve. They’ve even created a mascot, named Ollie, to represent their tortoise neighbors.

“This [groundbreaking] is a great first step, but the real show will be in May,” he said. “We’ve targeted a finished date to coincide with National Turtle Day.”

National Turtle Day is May 23. Costello said there will be trinkets passed out featuring Ollie, as well as an environmentally-friendly ribbon to cut.

Dylan is a reporter for WUFT News who can be reached by calling 352-392-6397 or emailing news@wuft.org.
Previous ‘It’s Too Early To Tell’: Alachua County Seeks State Funds For Sports Complex
Next Gainesville Urban Management Plan Aims To Set Forest Regulation And To Represent The Entire Community