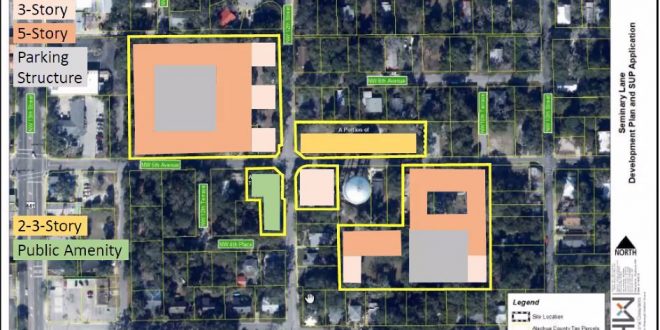 An overhead map shows the planned development that has caused rancor among its would-be neighbors. (Rendering courtesy of CHW Professional Consultants and City of Gainesville)

Gainesville’s Fifth Avenue neighborhood is going through changes. Like anything or anywhere else, it always has. But most recently, the approval of a student apartment complex has transformed the landscape into a battleground.

Fifth Avenue is a historic Black community. If the billowing oak trees that shield the neighborhood under soft shade could speak, they’d tell the story of a drastically different city — one where the footsteps of Black families and business owners echoed along the narrow streets, and where finding options for affordable housing didn’t equate to a laborious scavenger hunt.

But years have weathered this time capsule of a community. Lifetime residents packed up their belongings and moved due to growing expenses, Black businesses shuttered their doors, buildings were ripped off the ground and replaced — many became student apartments.

Another is now underway.

Tramell Webb Partners is the development firm under contract to purchase the 6.33 acre parcel of land from the Gainesville Florida Housing Corporation. Its original master plan, administratively approved by the City of Gainesville in February, included four main buildings. In her final order, Desai revoked approval for one of those buildings.

Buildings B1, three stories tall, and B2, five stories tall, were slotted for the west portion of the parcel. They nestle near each other to form a large, backwards L shape on the graphic for the development plan.

But Building B2 doesn’t meet the requirements set forth in the city’s Land Development Code. It’s one story too tall to be within 100 feet of the University Heights Historic District, according to  the city’s own land development code. It also offered one too many dwellings for the unit.

Thomas Hawkins, a former Gainesville city commissioner and professional planner opposing the development, sees this as a win.

“After the very beginning of this process, I had thought we would get nowhere,” he said. “If you had told me all the way back in April that we would be where we are right now, I would have thought it was a great victory.”

Despite Hawkins’ call for celebration, this rejection of Building B2 does not mean there won’t be a Building B2. Tramell Webb Partners may submit amended plans to be reviewed by the city. In fact, the development firm has planned to do so from the get-go.

David Theriaque is the lawyer representing Tramell Webb Partners. He disclosed the error with Building B2 back on the first day of the trial in September. Tramell Webb has since set forth a new plan.

According to Theriaque, B2 will remain five stories tall. It will shift a hair to the north to be more than 100 feet from the historic district, and offer six dwellings in lieu of the original seven.

The judge also ordered other modifications be made for the development to move forward.

Building A is the largest portion of the development plan. Three buildings converge to create one massive structure. It’s designated for the northwest corner of the parcel, one block east of Northwest 13th Street.

Each of the component parts comprising Building A must have their own entrances, which the LDC requires to face the public right-of-way. That requirement is not met by the current outline. Residents say they feel intentionally shut out.

The Northwest 6th Avenue entrance to Building A’s parking garage must also be removed. Tramell Webb Partners’ original plan has it sandwiched between the towering structure and several single-family homes. Desai ruled this would be disruptive to the neighboring residences.

Theriaque sees the solution as a no-brainer. A drawing depicting the removal of this entrance already lays at the ready, he said.

This eased Hawkins’ concern. But, as a Fifth Avenue neighbor himself, he still worries that the garage’s overwhelming light and noise pollution would further displace residents already feeling the effects of gentrification.

Affordable housing and preservation of the current community are the central tenets to the opposition’s argument. The parcel was once home to the Seminary Lane affordable housing complex. That history will hide in the silhouette of a development catered to Gainesville’s transient student population.

This isn’t just about land use to Hawkins or any other resident against the case. Their neighborhood could stand to lose much more than that: its people, and consequently, its history.

At least two similar student housing developments have been built in or around the outskirts of the Fifth Avenue neighborhood in the past five years, Desai noted in her final order. With another underway, longtime residents worry that increasing property taxes are a real and looming threat.

But Theriaque doesn’t see it that way. He said his excitement doesn’t solely stem from the case swinging in his clients’ favor, although he said that doesn’t hurt. Theriaque sees this development as a hefty step toward building generational wealth for the neighborhood.

Tramell Webb Partners is contractually obligated to build eight affordable housing units on the project site. The firm must also contribute $200,000 toward a community-based investment in the Fifth Avenue neighborhood, and grant $50,000 to the Brave Overt Leaders of Distinction Program for its impending relocation.

The price of the parcel is $8,590,600, some of which the Gainesville Florida Housing Corporation will now use for the construction of mortgage-free or payment-assisted homes. There’s hope in the form of housing.

These plans fall in phase two of the development plan, for which the sale is still being processed. Whether mortgage-free or payment-assisted homes are built, as well as how many and where, is left to the Housing Corporation’s discretion.

As far as the contention that this development as a whole violates a particular section of the city’s land development code, which states that structures in areas with special cultural and historical value ought to protect and enhance that value, Desai deemed that argument as void. The section of the LDC begins with a pivotal keyword: “Generally…”

This provision, as Desai concluded, is aspirational. It doesn’t set forth any concrete requirements. To frustrated residents like Hawkins who feel overlooked, it begs a question: If this section is not substantive enough to use in an argument, why have it written down in the first place?

“I think it shows that the city has a lot rotten in its process,” Hawkins said.

Both those in support and opposition of the development celebrate a partial victory. Yet, the work for either side is not over.

Tramell Webb Partners goes back to the drawing board. Their next steps will be submitting the redesign of Building B2, and presenting the required revisions for Building A.

If the development’s dissenters file a lawsuit within the next 30 days, this case will reach the Circuit Court for an additional appeal. Otherwise, it becomes final.

Terrell Arline represents the neighborhood advocates combatting the complex. He said they’re far from backing down.

Some neighbors, including Floid Churchill, whose property is a single chain-link fence away from a proposed building, have since removed themselves from the case. But the remaining voices that Arline is amplifying are prepared to continue speaking out.

Arline said he and the neighborhood’s residents plan to explore all available legal avenues. He spoke of arguing that the city-wide moratorium on all developments in Gainesville’s historically Black neighborhoods apply to the modification of this development. He said more action from the petitioners will follow in early 2021.

The case has been settled, even if just for the moment.

There’s no doubt in either the developer’s or the residents’ minds that this housing complex will attract students. Despite the word “campus” in the project’s name, the developer that specializes in student housing, and the walking distance from the site to the University of Florida, Tramell Webb Partners has said these apartments are not solely constructed for students.

Regardless, the neighborhood will see new faces from 2021 onward, starting with construction workers.

Natalia is a reporter for WUFT News who can be reached by calling 352-392-6397 or emailing news@wuft.org.
Previous A Total Freefall: Gainesville Sinkhole Showcases Cracks In Geology And Government Systems Alike
Next The Point, Dec. 31, 2020: Florida’s Top Stories During The Holidays