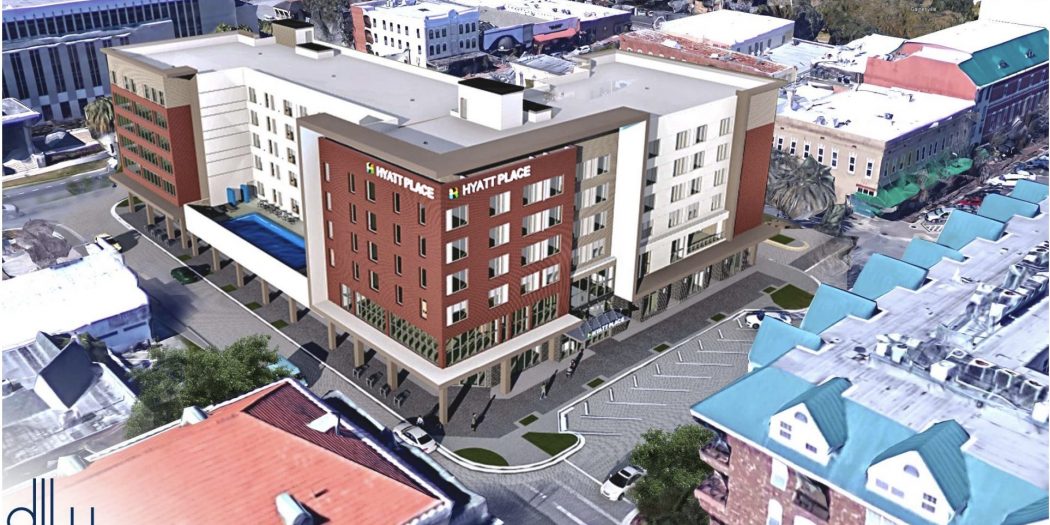 Correction appended: This story has been updated with the proposed development’s correct location.

Gainesville Community Reinvestment Area advisory board members voted 6-5 and moved a step closer to reality with a controversial plan to build a multi-million dollar Hyatt hotel and mixed-use development downtown. The board approved four right-of-way projects that promise to create “better public spaces” along all four edges of the development.

The 132,000 square foot development will include hotel, retail and residential spaces to be built on the corner of Southeast Second Place between Main Street and Southeast First Street. The primary development feature is a Hyatt Place hotel that plans to provide 145 rooms with meeting spaces, an elevated pool, a restaurant and a business center with room to showcase the art of local creatives and artists.

Some members of the board have criticized the proposal during recent public meetings. They’ve voiced concerns about increased traffic, the impact of competition with adjacent local businesses and how the building would affect the parking situation, among other issues.

The developer — a group called Magnolia Street Hospitality, LLC — approached the city about a partnership to improve the public right-of-way surrounding the site with potential improvements, which are not limited to the project. The estimated cost to the city for these improvements is $385,727, with room for a 10% contingency for unforeseen expenses that would cap the budget at at $424,300.

Reinvestment Area Director Sarah Vidal said this development provides an opportunity to reinvest in downtown and address aging infrastructure around the site more quickly than the city might otherwise do so.

Some proposed public access improvements include a request to convert Southeast 2nd Place from South Main to Southeast 1st Street into a one-way street and add on-street parking and drop-off zones.

“It would improve basically a whole city block,” Vidal said. “The goal of this project is to really maximize this building as a generator for downtown and to minimize parking on-site.”

Much of the site is currently a vacant lot.

However, not all board members were sold on the idea. Members Mike Palmer and Jacob Ihde, co-owner of Boca Fiesta, brought up concerns regarding the impact of the mixed-use development on local businesses.

“I see absolutely zero reason why the GCRA should fund this,” Palmer said in an emotional testimony. “When I look at this thing, I see developers steamrolling the city without addressing or touching base with how this will affect local businesses.”

On top of that, Palmer said he’d love to see more commercial uses added to the project that would help better meet neighborhood needs and desires.

“One of the biggest blights in Gainesville is a consistent homeless problem. Is there any component of this that will address the serious problem downtown?” he said. “I’m worried we’re funding projects that aren’t actually engaging the community. It’s pretty sad to see a project that only considers one side of the street.”

The idea also isn’t sitting well with Ihde, who agreed, pointing out his mixed feelings and worries about the construction timeline during moments of massive traffic downtown like around graduation weekend. The most pressing concern from members is that traffic in the area is already congested and the new development will worsen the issue.

Lane Abraben stressed the importance of communication between project developers and nearby business owners. “It’s very possible to kill a business by jamming it up with construction nearby,” member Abraben said.

The Gainesville City Commission is scheduled to vote on project’s proposed right-of-way changes on Dec. 3. If development agreements are approved, Vidal said, construction is anticipated to break ground in January, with a proposed opening in July 2022.

Mari is a reporter for WUFT News who can be reached by calling 352-392-6397 or emailing news@wuft.org.
Previous Diyonne McGraw, Leanetta McNealy Are Sworn Into Alachua County School Board Seats
Next Marion County Homeless Shelter Receives Over $250,000 In COVID-19 Funding