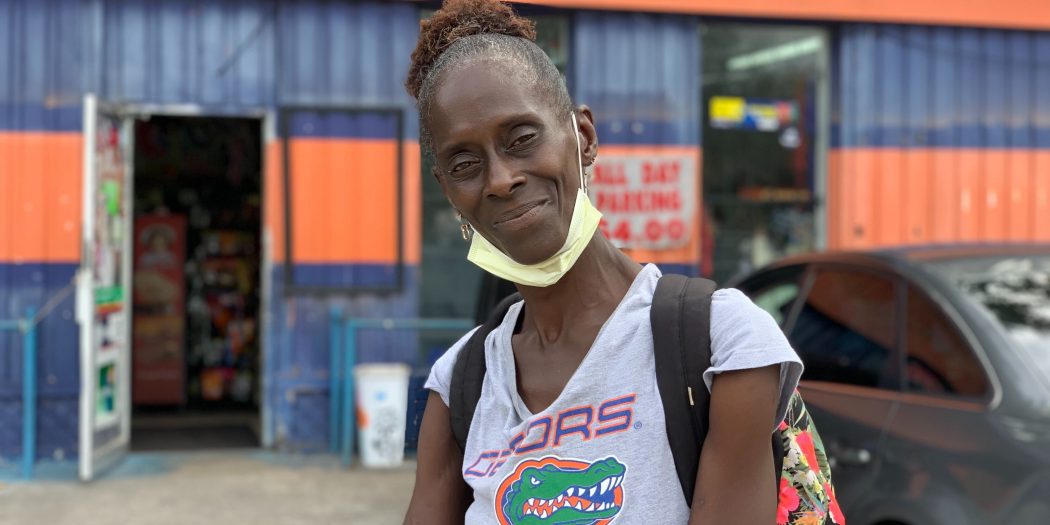 Dora Stevens was one of the people living near Southwest Fourth Avenue and Main Street who spoke to Gainesville city commissioners by phone during Thursday's meeting. Stevens alleged the city put up impoundment signs “in the middle of the night" and that police twice took all of her belongings. In the last few weeks, she said she’s even had suicidal thoughts. “I work hard for everything I have,” she said, and she hates asking for money. But because her cancer came out of remission this year, she said she now needs to figure out how and whether to pay for chemotherapy or to just let it be. (Ava Loomar/WUFT News)

By Lianne D'Arcy and Ava Loomar

These were some of the initial steps that Gainesville city commissioners said on Thursday they want the city to pursue to help solve a longstanding situation on South Main Street: dozens of homeless people congregating along a stretch between University Avenue and Depot Park.

Commissioners voted to have the city add garbage cans, portable toilets and lockers around the area as a short-term solution, and will begin working on securing permanent housing for those in need.

The city also plans to contact Alachua County government to obtain funding for housing-based social work outreach, and intends to learn what the county is already doing to mitigate the homelessness issue on this particular street. The city manager’s team is also going to look into securing housing vouchers with the help of the Gainesville Housing Alliance.

The issue is not new, but it does intensify in severity and public outcry every few years, such as in 2016 when nearby businesses complained about public defecation on their doorsteps. There are currently about 40 or 50 homeless people in the South Main Street area, according to City Commissioner Harvey Ward.

The solutions emerged in Thursday’s virtual meeting only after a series of tense public comments.

Many of the homeless people whom the city actions will affect were not aware the city would be discussing the situation, according to Kimber Tough, a homeless outreach paralegal with Southern Legal Counsel.

Lack of communication or short notice is a recurring problem, said Dora Stevens, one of the people living on South Main Street. She said the city has been giving homeless people only 24 hours warning before city police impound their belongings. Stevens alleged that police have taken a person’s few crucial items, such as sleeping bags or hygiene products, and often in the early hours of the morning.

“We are humans,” Stevens said. “The city should be providing us with more resources.”

Stevens originally came to Gainesville from Miami after battling cancer, though she went into remission a year ago. She has never stayed at two of the city’s more popular homeless shelters — GRACE Marketplace or St. Francis House — though she said she’s tried. According to Stevens, she was told she was at the top of a list to receive housing, but COVID-19 pushed everything back. In the last year, she said she has slept in a bed only two times.

She’s a regular near the Southwest Fourth Avenue and Main Street area. The employees of local businesses call her by name. She often sleeps outside the same store Ward said some community members refer to as “the Stab-N-Grab.” (Tough denounced the name. She said it was a term given to the store over the last 15 years by university students who see Black and brown people in the area.)

Stevens said she did not have to avoid stabbing attacks this summer, but she did have to avoid the pandemic. Thankfully, she said she never contracted coronavirus, but recent tests showed new glowing spots on her pancreas. Her cancer is back, but this time, she is in Gainesville, a city she said was without or unable to dedicate the same resources to free services to the homeless.

“I hate asking for money,” Stevens said. Instead, she offers to do odd jobs for cash and accepts donations of items like blankets and towels. That was until GPD twice took her belongings, she said.

Now she’s been trying to build back up what little she has to her name. “What else do I have left?” Stevens said.

She said she thinks lockers and bathrooms are a good idea — “It’s easy for the guys. Women just have to pee in the park behind bushes.” But mainly, she said just wants the city and county to know not all homeless people are bad people.

It was not one of the passed motions on Thursday, but Ward wanted to ensure the police felt comfortable handling violent or criminal individuals in the area.

“I don’t see any of the violence or any of the crime the commissioners are talking about,” said Alfredo Morales, a Gainesville resident who lives near South Main Street. “I don’t feel unsafe. I feel that the city has let down a big part of its population.”

Callers criticized commissioners for discussing criminal activity surrounding homelessness, right after stating that they in no way intend to criminalize being homeless. Most callers were opposed to the idea of further involvement in the area from the Gainesville Police Department and said they were disappointed by some commissioners’ desires to encourage police activity in the area.

“The idea of adding trash cans and bathrooms is the only time the commission has recognized the actual humanity of the people who are living there,” Morales continued. “They are my neighbors … and I don’t want cops harassing my neighbors.”

Commissioners did not address the allegation or a possible solution to GPD’s impoundment of homeless people’s belongings, nor was a timeline or deadline given to implement the proposed services to those in need in the South Main Street area.

In an Oct. 13 Facebook post, Jon DeCarmine, the executive director for Grace Marketplace, said there is a lack of connection between what people actually need and what is available to them.

“The biggest concentration of people on South Main Street are 50 feet away from the one emergency shelter downtown, but that shelter only provides services to them for three hours a day. Beyond that, their doors are locked to anyone not in their shelter. They’re not built to provide a solution to this problem.”

DeCarmine said the solution should start with community outreach.

“The core answer is simple: housing that’s affordable and meets their needs.”

DeCarmine pointed out that policies at many shelters orient themselves toward behavioral and social control. He said when someone is in a crisis and is not acting their best, it should not prevent them from accessing the shelter system.

“If we want substantial improvements in how homelessness ‘looks’ downtown, we need to invest in professional street outreach programs that are seen, treated, funded and trained as such. And we have to invest in these programs before we jump to investing in things like substance abuse treatment or job training.”

City commissioners plan to reconvene for updates on the situation during their Nov. 19 meeting.

Lianne is a reporter for WUFT News who can be reached by calling 352-392-6397 or emailing news@wuft.org.
Previous Gainesville City Commission Approves Low Income Housing Proposal
Next The Lede || Season II Episode VIII: Activism and Involvement