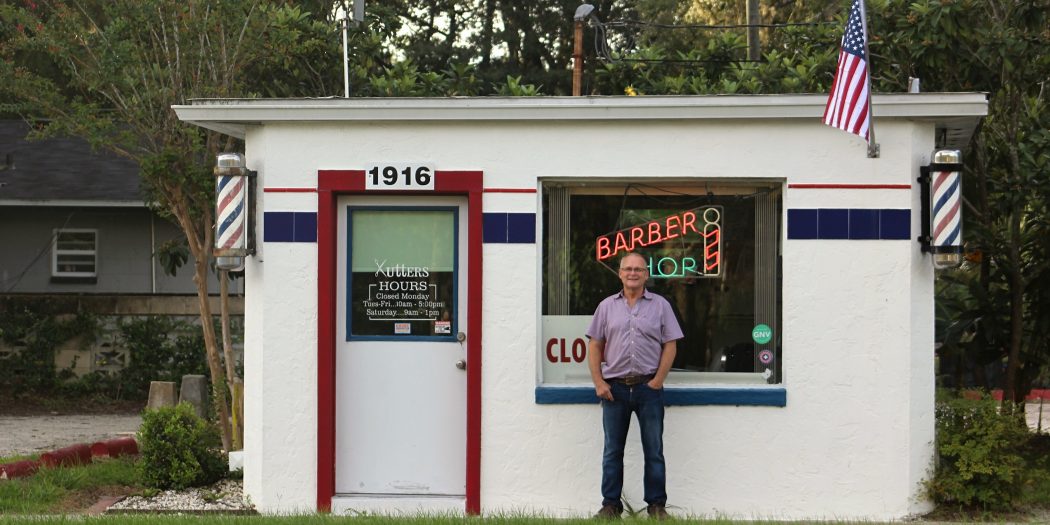 Bill Goolsby likes to call himself the “King of Northeast Waldo Road.”

He has driven the roadway at least twice daily for more than four decades, but every time, he worries it might be his last.

“You know, I’d like to live to be the oldest barber in America one day,” Goolsby said, dusting hair off a customer’s shoulder. “With the way people are driving these days, I don’t know if I’ll make it.”

Goolsby, 62, gives haircuts out of a small building on the edge of Northeast Waldo Road, almost untouched by the hands of time since its establishment in 1959. Marked by a classic red, white and blue striped barber’s pole outside, his old-school barbershop, Kutters, is considered a long-standing institution.

It’s near the same stretch of road where a 7 a.m. crash involving a logging truck killed a pedestrian in April just north of the intersection of East University Ave.

And the number of crashes is on the rise.

An analysis of crash data from recent years sparked the move for construction on the urbanized stretch of the bustling truck route to Jacksonville, according to Troy Roberts, Florida Department of Transportation spokesman for the regional office in Lake City.

The project promises to alleviate low lighting and restore pathways for both pedestrians and motorists along the heavily-traveled three-mile stretch just south of Gainesville Regional Airport. In its entirety, the east-west highway spans over 70 miles from Cedar Key to the city of Waldo. Some consider it one of the most dangerous and deadly roads for motorists and pedestrians in Alachua County.

FDOT data shows a 23% increase in crashes in 2019 over the previous year on the strip of Northeast Waldo Road planned for construction.

According to data from the Florida Highway Patrol, more than 600 accidents have occurred since 2014 along this stretch of Northeast Waldo Road. Of those, 207 resulted in injuries and 13 were fatal.

Over two-thirds of total crashes on Northeast Waldo Road in the last six years occurred along the same three-mile section between East University Avenue and Northeast 39th Avenue. There have been at least 1,007 crashes within those three miles since 2008.

But some commuters say the road itself isn’t the problem – it’s the people who drive it.

“There’s only so much we can out-engineer when it comes to safety projects like this,” Roberts said. “We can’t fix reckless driver behavior, but we can try to remedy it the best we can.”

FDOT said their safety team works to find balance when making these changes to roads.

“We’ve determined that upgraded and enhanced lighting is a way that we can keep both motorists and pedestrians safer on our roadways, particularly this urbanized stretch of Waldo Road, where we see an increase in pedestrian traffic,” Roberts said. “If you go further north or south, you don’t see nearly as much.”

“The agency periodically reviews roadways to see if any upgrades or improvements are necessary, and depending on the road, they can evaluate up to several times a year,” he continued.

In the meantime, traffic may worsen due to the construction and possible traffic shifts necessary to complete the project. The department said both daytime and nighttime work is to be expected. The project started Sept. 21 and should wrap up sometime in the summer of 2021.

FDOT has other local safety projects planned for the future, including a resurfacing project that will feature the installation of high-friction asphalt on off-ramps along Interstate 75 exits 382 and 399. It’s too soon yet to see whether the department’s light and sidewalk restoration will effectively reduce the number of crashes on Waldo Road.

“There’ve been far too many deaths out here recently,” Goolsby said. “I’ve had to pull out two people who staggered into the road myself.”

His message for the community: please drive safely. He’s not quite ready to turn in his comb, electric trimmer and straight razor.