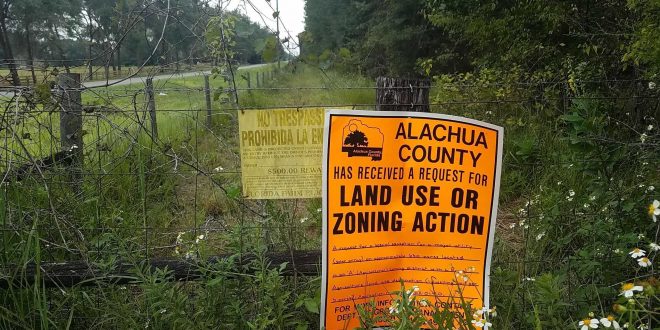 The proposed solar array site is a 650-acre plot of land north of Archer, near the intersection of Southwest 170th Street and Southwest 95th Avenue. (Ellen Bausback/WUFT News)

In perhaps another sign of the times Tuesday, a Duke Energy power outage prevented residents from airing concerns about a proposed solar facility that would be managed by the utility.

The facility would be built on 650 acres once used for silviculture at Southwest 170th Street and Southwest 95th Avenue, a few minutes north of downtown Archer.

The Alachua County Commission was set to vote on the project during a special meeting held virtually, after first listening to presentations from the county’s growth management office and First Solar, the company proposing the project, and then public comment for or against it.

At 6:45 p.m., however, just after First Solar had finished making its pitch, the commission learned that 900 Duke Energy customers were experiencing power outages around Archer.

A tree falling on a power line during a thunderstorm caused the outage, Ana Gibbs, a utility spokesperson, told WUFT News. It was unclear what kind of tree or where it fell, Gibbs said.

Without knowing any specifics about the cause, Hutchinson quickly added, “The nature of this outage sounds pretty iffy, and it’s affecting exactly this area.”

County Commissioner Ken Cornell replied that it was “probably affecting a lot of the parties” involved in the matter. “I don’t see how we could continue,” Cornell said.

Hutchinson called for an adjournment until 7:15. When the meeting resumed, a Duke Energy representative joined the call and recommended a postponement. “I’m just going to make the call here,” Hutchinson said before saying the hearing would resume next Tuesday.

Several community members weighed in on the outage via the Facebook livestream comments.

“It’s 2020 – should we expect anything different?” replied Jean Barry Hill of Archer.

Hutchinson said he hoped the next meeting could be a hybrid of in-person and virtual, with some residents allowed to offer public comment at the county administration building.

The solar power facility would be in an agricultural zoning district, according to Gerald Brewington, senior planner for the Alachua County Department of Growth Management.

First Solar had to apply for a special zoning exception to allow the land to be used for this purpose. The facility would generate 74.9 megawatts of power and is expected to produce enough energy to power 23,000 homes per year, according to the company’s plan.

The facility is also estimated to generate more than $200,000 a year in tax revenues, said Laura Abram, First Solar’s project execution director. Other benefits to the community: 200 construction jobs created, with a job fair early next year to hire workers from the area, she said.

The site is ideal because of other electrical infrastructure in the area by Duke Energy, and pine trees there were already set to be harvested, whether or not the plant is built, Abram said.

However, some residents have raised concerns about the project.

Cynthia Wonders, who lives across from the site, supports preserving the rural feel of the neighborhood and wanted to avoid health problems or contamination the facility might bring.

“Would you like an industrial solar plant almost the size of Central Park in the middle of your neighborhood?” Wonders wrote in an email to Cornell. “I am not an opponent of solar power, but this is not the location that is best for our community.”

Deborah King-Woolridge and her 94-year-old mother Bernice Crawford Cameron – who was born on 95th Avenue in the 1920s – said they are worried about their property being further devalued, given there are already large transmission towers going over it.

“We are not opposed to solar and other renewable energy sources,” they wrote in a letter to the commission. “We feel we are again falling victim to the same types of environmental injustice my family suffered when these towers were installed in the 1960s.”

Environmental advocates said while renewable energy is important, the developers and county officials didn’t engage enough with the public, especially considering the pandemic.

“In this instance, that bar has not been met,” wrote Alyssa Cadwalader, the chair of the executive committee for Sierra Club Florida, and Frank Jackalone, the chapter’s director.

Several “No Solar Power Plant” signs could be seen recently stuck in the ground along the two roads bordering the site as well as in residential yards near the proposed site.

First Solar has been in the planning and review stage since 2017. The permit application was submitted in late May, and there were several workshops with the community since then.

If the project is approved, Duke Energy would build and operate the facility and distribute the power. It would then serve customers in Archer, High Springs and Micanopy and sell power to companies such the Clay, Seminole and Central Florida Electric co-ops.

There are three existing solar projects in Alachua County. One, built by Sybac Solar, is on Northeast 53rd Avenue near the Murphree Water Treatment Plant, according to Brewington. That has a 6-megawatt array. Another facility that can generate 74.9 megawatts was constructed by Florida Power and Light in eastern Alachua County. A much smaller solar array near Payne’s Prairie generates 1.5 megawatts of power, he said.

Ellen is a reporter for WUFT News who can be reached by calling 352-392-6397 or emailing news@wuft.org.
Previous ‘We Thought We Could Fill That Niche’: Couple Starts Tropical Plant Company In Gainesville
Next The Point, Sept. 30, 2020: Assessing UF’s Progress On Its Racial Reckoning Promises