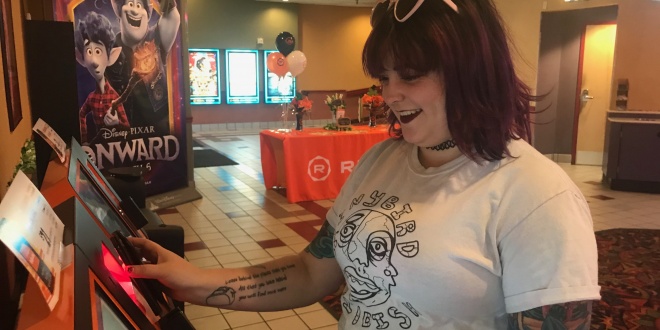 Michelle Shea, a freelance technician, watched as her colleagues at the Orlando Repertory Theatre tearfully embraced. Shea, 19, isn’t a crier, but she felt the same sadness knowing the coronavirus outbreak would keep them from being in the same room for eight weeks.

She said the professional children’s theatre had to close recently due to area elementary schools canceling their field trips to see performances there.

“They were so good about it,” she said of how the theater’s management discussed the venue’s future as well as theirs as employees. “It really is like a second home.”

Theater and concert venues as well as movie houses across the nation – including Broadway in New York – have shut down in the wake of COVID-19. They had no choice after the U.S. Centers for Disease Control and Prevention urged against gatherings of 50 or more people.

The theater community in Gainesville theater has also shut down temporarily.

The Hippodrome State Theatre recently announced the cancellation of its upcoming production “Native Gardens.” That happened three days after the early closure of the drama “Marie and Rosetta,” which was supposed to have run until Sunday.

Hippodrome marketing coordinator Julia Campitelli said its staff wanted to live stream the remaining six shows of “Marie and Rosetta,” but could not per Actors’ Equity Association rules.

“It’s not a great time for the arts in general,” Campitelli said.

The Hippodrome has experienced financial difficulties with accruing funding from the state and receiving enough money from local donors. Despite the challenges, however, the theatre should recover from whatever it may lose in the next two months, Campitelli said.

“This isn’t the nail in the coffin for us,” she said.

In Ocala, the Reilly Arts Center has canceled or postponed several upcoming concerts and performances, and all activity at the Ocala Civic Theatre has been suspended through March 30.

The Florida Theatre in Jacksonville also temporarily shut down and postponed all of its performances through at least April 1, according to The Florida Times-Union. The 1,900-seat theater typically hosts touring comedians, symphonies, bands and musicals.

The movie theater industry has also plunged due to COVID-19. City officials in Los Angeles and New York have ordered cinemas to close, causing box office receipts to fall to historic lows, according to the Los Angeles Times. AMC, Regal and Cinemark, the three largest theater chains, all announced that they would be shutting down nationwide indefinitely. The Regal chain’s employees were seeking relief from the government, The New York Times reported.

Ariella Elkobi, 19, a film major at Florida Atlantic University, lost her job at Regal Shadowood 16 in Boca Raton. Elkobi, who had been recently promoted to managing floor staff and handling money at the theater, said patrons came wearing masks and gloves just to return their tickets. They also called the theater to cancel their pre-purchased tickets and subscriptions.

Elkobi said her general manager advised all employees to request cash benefits from the state government after getting laid off. She said she took the job as a side gig for money, but would like to have some income because the outbreak has also affected her father’s boat business.

“I think I still have a job afterward,” she said. “The new favorite word is uncertainty.”

Three days prior to the Regal Cinemas announcement, a moderate amount of moviegoers were still going in and out of its theater at Butler Plaza in Gainesville.

Clementine Ellis, 23, of Flagstaff, Arizona, said she was conscious of recommendations against going to see movies, but didn’t want to let fear stop her from doing something she enjoys.

“I like supporting original films in theaters because I hate streaming services,” Ellis said. “Movie theaters are dying, so I’m just going to keep doing what I do.”

As for the Gainesville arts scene in general, it also is being affected by the coronavirus.

The next Artwalk Gainesville event was scheduled for March 27 but has been canceled.

Emily “Roots” Taylor-Duplantis, the 22-year-old director and curator of The Slate, an art gallery and performance venue on University Avenue, said artists still need to find a way to offer art to the community in spite of the outbreak.

“I think it’s more important than people realize and that we don’t let it slip away,” she said.

Roots said she was surprised but happy that The Slate was able to host a capacity crowd for its recent “Up All Night: A One Direction and Jonas Brothers Night!” event.

“To a point, sitting at home every day and avoiding absolutely everything isn’t going to get you anywhere,” she said.

Shea also stage manages at the Garden Theatre, which is in Winter Garden, 14 miles outside Orlando. She would likely spend her forced time off painting and playing with her pit bull Sasha.

“I’m losing my main source of income,” Shea said. “That can kind of throw a damper on things.”

Emma is a reporter for WUFT News who can be reached by calling 352-392-6397 or emailing news@wuft.org.
Previous The Point, March 22, 2020: A Personal Story Of Trying To Get Tested For COVID-19 In Florida
Next Introducing ‘From the Front Lines,’ WUFT’s Daily Podcast About Coronavirus In Florida