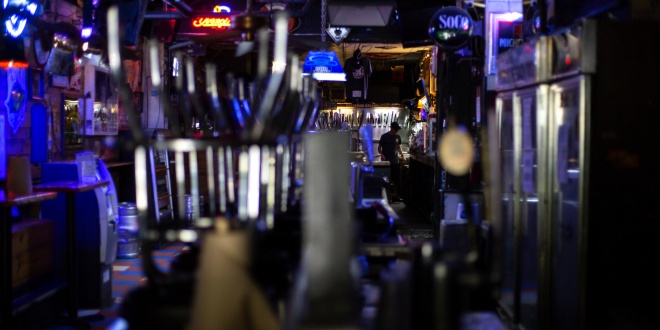 Keith Singleton, the managing partner at Salty Dog Saloon, works in the back of the closed bar on Thursday, March 19, 2020, in Gainesville. Singleton said the bar is attempting to go online to sell merchandise while the establishment is closed until April 16th. Gov. Ron DeSantis ordered all bars in Florida to close for 30 days by March 17 at 5 P.M. to slow the spread of COVID-19. (Chris Day/Fresh Take Florida)

Many Of Florida’s Bar And Restaurant Owners Shut Their Doors, Laid Off Staff This Week

As the clock approached 5 p.m., Roger Morenc hopped from bar to bar Tuesday in Amelia Island before a ban would shut the doors for a month. He spent the last hours the bars were open supporting the businesses he works with as a distillery owner.

“We went out to as many bars as we could and ordered a drink and gave a big fat tip and just kind of did a last-call tour to try and give one last shot in the arm to any barkeep or establishment that we do business with,” Morenc said.

Gov. Ron DeSantis announced an executive order Tuesday requiring any bar, pub or nightclub that makes more than 50 percent of its gross revenue from alcohol sales to close for 30 days. The Department of Business and Professional Regulation will enforce it.

DeSantis then announced on Friday that restaurants are increasing their take-out and delivery orders to accommodate customers while social distancing is encouraged. As a result, he ordered that restaurants and food establishments stop all on-premises food consumption for customers.

Businesses can sell alcoholic drinks in to-go containers for people to drink at home, according to the order.

Owners in Florida’s service industry are following a national trend of closing these businesses because they feel a social responsibility to their customers and staff to help slow the spread of the COVID-19 virus.

According to the non-profit research group Conference Board, the COVID-19 virus has most impacted the hospitality industry – which includes restaurants. Bars are another portion that are being hit hardest.

DeSantis said in a press conference at the Capitol Wednesday that Monday’s unemployment rate at 2.8% reflected “a time that seems a world away.” Thousands just lost jobs in a day.

Restaurants must only allow 50 percent of the building’s capacity at a time and have customers seated six feet away from other parties, which can be no more than 10 people.

“At the end of the day, you have people crowding into these places,” DeSantis said, “and that is creating the type of activity that we are being warned against.”

Morenc is the owner of Marlin & Barrel Distillery in Fernandina Beach that supplies alcohol from stadiums to chain restaurants to small bars, totaling about 250 outlets. Friday is his business’ fifth anniversary, but there won’t be any celebrating at the distillery.

Sales have dropped significantly. A week ago, sales dropped by about 10 to 15 percent, Morenc said. Revenue now is about one-fourth the rate that the business would have compared to this time last year.

The drop-off in sales is even more significant to note with it being Florida’s spring break season, he said.

“This is a peak time for all of Florida,” he said. “This isn’t the second week of January where everybody’s recovering from holidays and holiday spending. This is our best stuff from a seasonality perspective.”

According to the United States Bureau of Labor Statistics data from May 2018, 45,170 people work as bartenders in Florida. Another 110,600 work as cooks in restaurants. Food preparation workers total 62,010. And 211,860 earn their income as waiters and waitresses.

DeSantis activated a bridge loan program, the Florida Small Business Emergency Bridge Loan Program, to give short-term, interest-free loans to those small businesses that have been impacted financially due to the virus. The application period began Tuesday and runs through May 8.

“Since this economic change has happened, we’ve had a huge uptick in calls. Some of it is unemployment compensation, but a lot of it are small business people who are interested in the bridge loans and interested in other ways to be able to get a lifeline,” DeSantis said in a press conference Wednesday.

Small businesses with two to 100 employees that were affected by the virus can apply for short-term loans up to $50,000, which will be interest-free for a year. A business must have been established before March 9, 2020, and must prove economic impacts from COVID-19.

Florida’s bar and restaurant communities aren’t alone in the financial difficulties they now face. Establishments across the country are in a similar situation.

Jamie White, co-owner of Pearl Diver, is facing a similar situation in Nashville, Tennessee – another city known for its restaurants and craft cocktail bars.

He and his partner’s bar, Pearl Diver, closed Tuesday after the Metropolitan Board of Health of Nashville and Davidson County declared a public health emergency on Sunday to close bars and limit restaurant seating to combat the spread of the coronavirus.

White opened his bar two years ago. With his mom a bartender as well, he’s been around the service industry for the better part of 33 years.

He kept the bar open for a few days, but sales were bleak. His business was doing well weeks ago. This week he applied for small loans, without which they may not be able to stay open.

“We all get to a point where we go, ‘Nothing is safe enough.’ That’s why we are closing. That’s why we did close. We didn’t have to,” he said. “Opening back up, there’s only so long we can stay closed or we close forever.”

White has called and emailed his state lawmakers and U.S. Senators daily urging them to help.

White said that even if he receives the loan he is applying for, his bar could keep afloat for about four weeks if his loan payments and rent are not deferred. He is still paying back half of the loans he took to open the business along with the payroll and taxes.

“We just had to pay our liquor-by-the-drink tax, and that’s not getting deferred yet. And that’s almost $30,000 out of our account,” he said.

Tennessee’s liquor-by-the-drink tax is due monthly on the 15th and totals to 15 percent of the sales price of all alcoholic drinks sold at the business.

Macchialini decided Tuesday to switch to delivering food only to reduce contact in the restaurant. And a day later, he laid off nearly 30 of his employees.

“We’re trying to hang on here, which is doing this delivery. And who knows – this is day two of it,” Pirolo said. “So I don’t know how feasible and attainable this even is.”

Pirolo said he is assisting his staff in the ways he can during a time in which he said he’s seen nothing like before in the service industry. He is advising them on means to receive unemployment aid and suggesting they file their taxes as soon as possible to get reimbursements.

None have an alternative plan for income at the moment; they’re all in shock, he said.

“The crazy thing is restaurants operate on very small margins, so a lot of people live paycheck to paycheck. With the restaurants, like small restaurants, a bad week turns into a bad month, which could close the restaurant,” Pirolo said. “We’re talking about zero revenue. Zero.”

Pirolo posted to social media Tuesday in a video asking DeSantis and Miami-Dade Mayor Carlos Gimenez to help the restaurant community during the pandemic.

The idea spread among prominent names in the Florida restaurant community. Pirolo got the idea from seeing a post by Michelle Bernstein, a renowned James Beard Foundation award-winning chef from Miami. Numerous bars and restaurants across the country followed suit.

“We are asking for an immediate response to provide some much-needed assistance. Allow us to hold onto our sales tax and our county tax, which is due in three days,” Pirolo said in an Instagram video on his restauraunt’s page. “It would greatly help our restaurants and staff stay afloat longer.”

The U.S. Department of Housing and Urban Development announced Wednesday that all foreclosures and evictions will be halted for 60 days.

Pirolo said he is asking DeSantis and his local government to allow suspended rent payments and that they cannot be evicted.

“We can’t get lost in processing and they’re waiting weeks,” he said. “Because again, even just the state of Florida there’s over a million restaurant workers.”

Pirolo hopes enough people call on legislators and their local government to make a difference and that help comes quickly.

Angela is a reporter for WUFT News who can be reached by calling 352-392-6397 or emailing news@wuft.org.
Previous DeSantis Shuts Down Restaurant Dining
Next It’s Still OK And Even More Necessary To Give Blood During Coronavirus Outbreak, Blood Banks Say