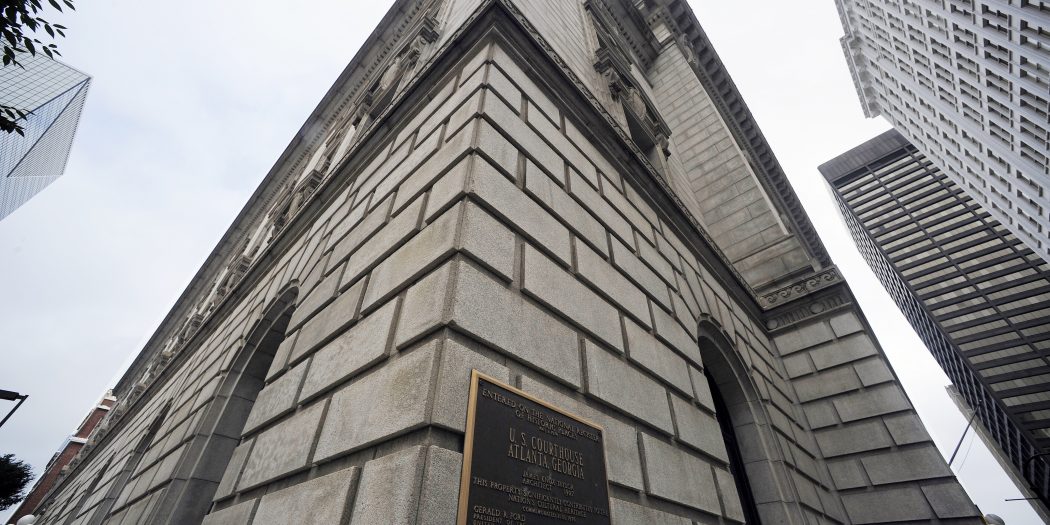 This July 21, 2012 photo, shows the exterior of the U.S. Courthouse for the 11th U.S. Circuit Court of Appeals in Atlanta. The state of Alabama is asking a federal appeals court to toss a lawsuit accusing lawmakers of racial discrimination for blocking a minimum-wage increase in majority-black Birmingham. At issue in arguments scheduled Tuesday, June 25, 2019, before the 11th U.S. Circuit Court of Appeals is a 2016 law requiring every city in Alabama to have the same minimum wage. (AP Photo/Mike Stewart)

Weeks Before Registration Deadline, Amendment 4 Is Still A Mess In Florida

Lee Hoffman lost his right to vote back in 1978.

He got it back when Florida voters passed a constitutional amendment in 2018 restoring the voting rights to nearly 1.4 million ex-felons.

Then, earlier this summer, Hoffman lost his right to vote again, after a new law passed by Florida’s Republican Legislature and signed by its Republican governor limiting the restoration of voting rights to ex-felons who have already paid their outstanding court fees and fines. Hoffman, who lives in Plant City east of Tampa, said he owes nearly $1,800 and can’t afford to pay it yet.

Arguments were set for Tuesday in the U.S. Court of Appeals for the 11th Circuit, which already has ruled in a related case that, “access to the (voting) franchise cannot be made to depend on an individual’s financial resources.”

Florida’s disputed law requiring repayment could prevent hundreds of thousands of former felons from voting in 2020, many of whom are minorities. Trump earned support of only about 8 percent of black voters in 2016 and has been actively courting black support.

The clock is ticking: The deadline to register to vote in Florida’s March 17 primary elections is Feb. 18. It’s unclear whether the appeals court will rule in the case before the deadline.

Hoffman, a Navy veteran, had six felony convictions in cases involving burglary, criminal mischief, grand theft, driving without a license and cocaine, between 1978 and 2006. He completed probation in 2008, and has since become involved with a ministry and works with fellow veterans.

Hoffman said he would have voted for Trump in 2016 but no longer supports him.

He is one of 17 plaintiffs in a federal lawsuit challenging the law signed by Gov. Ron DeSantis requiring full payment of fines or fees before ex-felons can vote again. The American Civil Liberties Union, Brennan Center for Justice and the NAACP filed the lawsuit.

U.S. District Judge Robert L. Hinkle in October issued a preliminary injunction that restored voting rights for Hoffman and the 16 other plaintiffs, but not more broadly. “Florida’s longstanding practice of denying an otherwise-qualified citizen the right to vote on the ground that the citizen has been convicted of a felony is not, without more, unconstitutional,” Hinkle wrote.

The governor in December appealed the injunction, escalating the case to this week’s arguments in Atlanta. The federal trial in Tallahassee before Hinkle was scheduled to begin in April.

Since its passage, the amendment has left Florida lawmakers, officials, lawyers and individuals with questions about how to implement it.

The DeSantis administration said the law is an interpretation of language in the amendment, describing “all terms of their sentence including parole or probation,” which it said was always intended to require payment of all fines and fees.

Last week, the Florida Supreme Court, composed entirely of justices appointed by Republican governors, released a non-binding advisory opinion agreeing with DeSantis. That court said the amendment was originally intended to require former felons to pay all fines and fees before being eligible to register to vote. The decision could influence what happens Tuesday.

There also remain practical problems on the issue. Florida doesn’t have a centralized database of court-imposed fines or fees, meaning that ex-felons – and voting officials – can’t easily determine what might still be owed across the state’s 67 counties, especially in older cases where court files might be inaccessible.

Other than the constitutionality, plaintiffs’ lawyers have also pointed to an impractical implementation of the law as an issue.

“People are fearful, because even if they think they don’t have any fines or fees, they’re not able to get a definitive answer,” said John Cusick, an NAACP attorney.

The elections supervisor in Leon County, Mark Early, said his office receives no details about court fines or fees. The county includes Tallahassee, the state’s capital.

“We’re in a limbo situation,” Early said. “Nobody’s really in a position to assimilate that information in a comprehensive manner so that anybody can make heads or tails of it.”

Early said his office will register anyone who is a former felon and believes they have completed all their sentencing obligations. If they sign the oath, their registration will be processed and names added to the voter rolls until his office is notified otherwise by the state Division of Elections. That hasn’t happened so far.

It’s likely some former felons haven’t registered to vote because they owe unpaid fines or fees or they’re unsure whether they do, Early said. Florida considers it a third-degree felony to submit false voter registration information.

“There’s all of this uncertainty and confusion and cloud of ambiguity out there,” he said.

Florida’s status as a swing state means it remains vitally important for both political parties. Trump – who announced in October that he was becoming a resident of Florida – won the state’s 29 electoral votes in 2016 by fewer than 113,000 votes, or less than 1 percent of the vote. President Barack Obama won Florida in 2012 by the same narrow margin.

“It’s such an interesting political state,” said Sharon Austin, a University of Florida political science professor. “This is yet again, a situation in which the nation is looking to Florida because of his involvement in some type of political and civil rights controversy.”

Hoffman, who registered as an independent voter in 2019, said he wants the opportunity to vote for who he thinks will be best for the job.

Hoffman said he owes about $1,800 in court fines and fees, including $470 related to his felony convictions. He is hopeful he can sort this so he can cast a ballot in the upcoming elections.

If he does, he said, he will take a picture sporting an ‘I voted’ sticker then post it on Facebook.

Karina is a reporter for WUFT News who can be reached by calling 352-392-6397 or emailing news@wuft.org.
Previous The Point, Jan. 27, 2020: Sea Level Rise Resiliency Plans Begin To Form In Jacksonville And Miami
Next Zero Waste Week Aims To Promote A Lifestyle That Produces No Waste