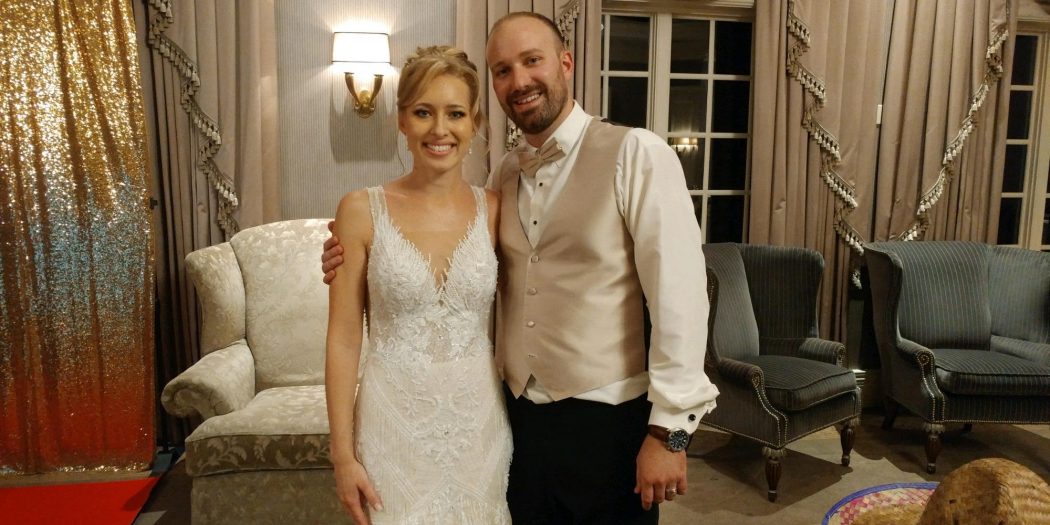 Christina Navetta and David Navetta pose for a photo at their wedding reception at Golden Ocala Golf and Equestrian Club on Nov. 23, 2019. Navetta had $80,000 in student debt but paid it all off by living at home and spending conservatively. (Courtesy Photo of Dena Ditzel)

Student Debt Weighs Heavily For Voters Prior To 2020 Elections

The lights are carefully hung. A joyful melody fills the room. David Navetta adjusts his tie as he prepares to receive his soon-to-be wife waiting at the other end of the aisle. Tears pool in Navetta’s eyes as his Greek bride, formerly Christina Lagou, begins her descent to her groom.

A few minutes later, the short ceremony is over. The audience claps as the couple kisses and is pronounced husband and wife.

Two of the guests clapping in the audience, Joshua Jurczak and Dena Ditzel, are friends Navetta has known since high school. As he heads to the reception, Jurczak has something on his mind that is unrelated to his longtime friend’s wedding, a problem he can’t quite forget even in happy times like this.

Jurczak, who is 30 years old, is still carrying $50,000 worth of debt from his college career, and he’s planning to go back to graduate school in 2020.

Student debt and the policies the different candidates are offering to relieve that burden will be a deciding factor for Jurczak when he votes in the presidential primaries and general election next year.

Student debt plagues more than 44 million Americans. U.S. students owe more than $1 trillion, and that number keeps growing, according to a 2019 report by the Federal Reserve Bank of New York.

While the wedding was a good distraction for Jurczak, it didn’t change how he feels about President Donald Trump’s lack of attention toward resolving the student debt crisis. While considering himself a Democrat, he sees pros and cons to both sides. Although he thinks there’s hope for the student debt crisis in the 2020 election, he has not even begun to look at the candidates running in the election.

Jurczak said he really hasn’t been interested in politics since the last election in 2016.

“I think politics have changed and instead of really being for the people, they have catered to those who can afford to make changes,” he said.

Jurczak received his first bachelor’s degree in anthropology from the University of Florida in 2012 and decided in 2015 to start completing his prerequisites for a nursing degree at Santa Fe College. After getting his Associate of Science in 2015, he went to the University of Central Florida and graduated with a Bachelor of Science in nursing in 2018.

In the process, Jurczak piled up more than $55,000 in debt. His parents could not afford to help him pay for school, and although he did work part-time in Sears’ automotive department in Gainesville through most of his college career, it provided little cushion.

He has applied for some debt relief programs, including the Nursing Student Loan Forgiveness Program, but he said many are a hassle to get into.

For instance, to qualify for the Nursing Student Loan Forgiveness Program, an individual must be licensed in the state of Florida as a practical nurse, registered nurse or advanced registered nurse practitioner, have student loans from a nursing education and work full-time at a specific employer, such as the Florida Department of Health or specialty hospitals for children. As a registered nurse at UF Health Shands Hospital in Gainesville, Jurczak is waiting to hear if he will be accepted into the program.

He is currently paying off his student loans solely by working at Shands Hospital. But attending graduate school for a Master of Science in nursing will mean taking on another two years of student loans. By the time he finishes the master’s degree, he’ll owe nearly $100,000.

“I feel that I go into work every day keeping people alive and trying to get them healthier, but to be able to do that is so expensive,” he said.

Ditzel and Navetta, both 29 years old, sympathize with Jurczak – but only to a degree. Both paid off their student debt – $12,000 for Ditzel and a hefty $80,000 for Navetta – within two years of graduating.

Before Ditzel graduated with a bachelor’s degree in early childhood education, she began working two jobs, one in retail to cover her normal bills and another waiting tables. That money gave her a head start on her loans as she tried to live as conservatively as possible: No eating out, no random shopping sprees. She even declined to buy the car she needed; instead, she used the down payment she had saved for the car on her loans. Ditzel had to cringe when her friends told her about all the things they had purchased with their tax returns while she had paid hers toward student debt.

Navetta lived at home with his parents after graduating with a Bachelor of Science in public health and a master’s of physician assistant studies, meaning he had no payments for rent, utilities or internet service.  He avoided making large purchases and instead put a substantial portion of each paycheck toward paying off his debt to decrease the interest that would accumulate. He saved about $5,000 by paying it off in two years instead of the 10-year track the loan company had recommended.

Ditzel agreed with Jurczak that the government should help more to reduce student debt, but Navetta said graduates can pay off their own debts if they plan and are smart about it, not making ridiculous purchases and prioritizing payments.

“I think there’s a lot of different groups of people that need more help than a kid coming out of college, who’s set on the right path, with a degree on their belt to help them get a solid job,” Ditzel said.

As for Jurczak, right now he can pay his loans without struggling. But he is not entirely comfortable. While he is not living paycheck to paycheck, times can be tight, depending on how much overtime he gets and how many weekends he works. At the rate he’s currently able to make payments, he’ll be in his late 50s by the time he pays off all his loans.

As he and his wife, Stephanie Jurczak, watched Navetta and his wife take their first steps in their first dance as a married couple, student debt was pushed from his mind. But his next payment is creeping up slowly, as the next election draws closer. Jurczak hopes the winner of that election will make changes that mean he won’t be stuck in debt for the next 30 years.

When the bride and groom gestured for everyone to come to the dance floor, the Jurczaks put politics and their debt worries aside to join their friends in the Zorba, a traditional Greek dance, while music played over the pink-lit room.

Wyatt Schreiber is a reporter for WUFT and can be reached at schreiberw@ufl.edu.
Previous Afternoon News in 90: Dec. 3, 2019
Next Ocala Council Blocks Winning Candidate From Office Over 33-Year-Old Felony Conviction, Delays Decision On Another Election