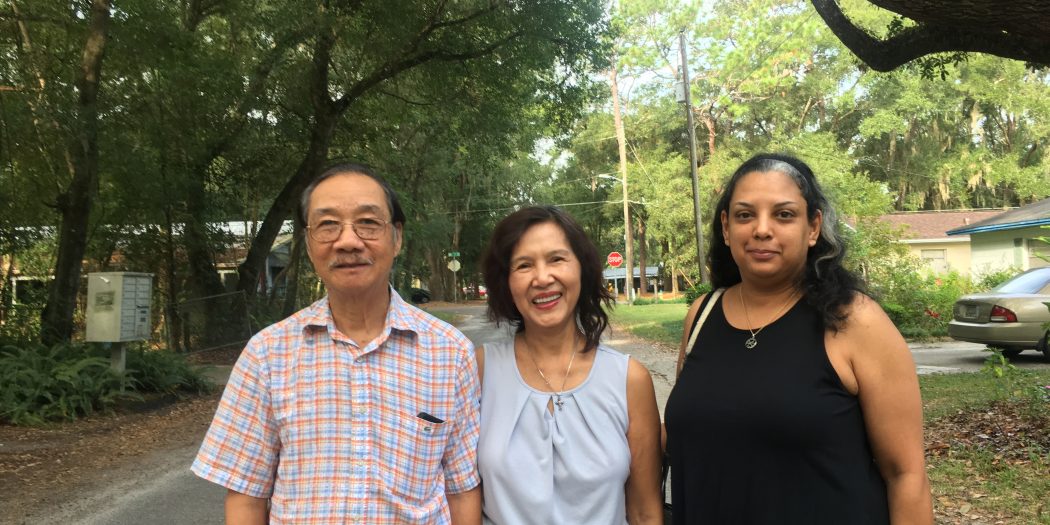 Gainesville Neighbors Have Asked City Government For Three Years To Repave Their Road. They Might Finally Get Their Wish

November 6, 2019 Getting around, Government and politics

Hong Nguyen recalls that when he moved to Northwest 31st Place in Gainesville’s Ridgeview neighborhood in 2003, the road was in disrepair.

Sixteen years later, potholes still line the street, the condition of the road continues to worsen, and Nguyen has had enough.

While not quite as severe a problem as in the northern United States, potholes are a frequent complaint in Gainesville. This year alone, the city has received more than 150 requests for road repair through its app, myGNV. Of these, more than half specifically concerned the refilling of potholes, sinkholes or depressions.

But Nguyen wants more than patched potholes on his street. Over the past two months, he has been fighting harder than ever to get the road repaved completely.

Years of constant flooding, multiple complaints from residents and the repaving of numerous roads in and surrounding his neighborhood led the city to agree to repave Ngyuen’s road and develop a drainage solution.

Nguyen’s fight for a safer road began in February 2016 when 17 residents signed and sent a petition to Anthony Lyons, who was then the interim city manager, requesting that the road be repaved. Nguyen did not receive a response from Lyons or any other city employee and opted against following up with the petition, believing that the city was ignoring the plea for help.

Over the three years since the failed petition, residents have continued to complain about the state of the road but with little success. On Sept. 29, Nguyen decided enough was enough and emailed Mayor Lauren Poe to complain.

Poe responded to the complaint, and the potholes were filled almost immediately, but Nguyen said the city has filled the potholes before.

Each time the potholes are filled, more form. Meanwhile, residents believe the material the holes are filled with is dissolving and washing away when it rains, according to Wendy Dematas-Palmer, Nguyen’s next-door neighbor.

“They’ve tried,” she said, “but they just haven’t had a permanent fix.”

The continuous formation of potholes is becoming a safety concern for the residents, which is the driving force behind their need for a permanent resolution. The potholes damage tires, dent car rims and are a safety hazard for children who ride their bikes and play in the neighborhood and the park nearby, Dematas-Palmer said.

“It’s a huge safety issue,” Dematas-Palmer said. “Even if you’re just jogging, you could slip into a hole.”

Between 2006 and 2018, 39 claims have been filed against the city by people seeking compensation for damages caused to their cars and themselves because of unfilled potholes. The city made payments to 29 of the 39 claimants, resulting in a total payout of more than $25,000 over the past 12 years for pothole-related damages.

The city’s public works department uses a three-year plan from the Army Corp of Engineers Pavement Condition Index to compare streets to one another and thus decide which to resurface.

The city budgets $1.9 million each year, which allows them to repave only seven to ten of the over 400 centerline miles of road for which the city is responsible, said city spokeswoman Shelby Taylor.

Prior to the reevaluation of Northwest 31st Place in late September, Nguyen was told that there are roads in worse condition than his, so it would not be repaved as part of this three-year plan, Philip Mann, Gainesville public works director, said in an email to Nguyen.

After having complained for so long, watching nearby residential roads be repaved, Nguyen said he and his neighbors were confused about the local government’s priorities.

“We can’t bear it anymore,” Nguyen said. “They need to repave the road now.”

After heavy rain hit one night last month, the street was submerged in water, and 12 hours later, water remained settled in cracks between the original road and where the potholes had been filled.

Nguyen’s frustration with this prompted him to file another complaint to the city, this time regarding the flooding, which the city’s drainage staff investigated.

According to Taylor, the results from an initial investigation seemed to support the conclusion that the road is not experiencing extensive damage due to flooding, and it is unclear what the cause of the potholes is. However, the city would continue to investigate the situation and attempt to solve the flooding issue.

Despite the city’s proposal to implement a drainage solution to prevent future flooding, residents remained frustrated that this would likely not result in the resurfacing of the road.

“If the city doesn’t care enough to solve this issue, we’ll go ahead and complain to a higher government authority,” Nguyen said. “This is a big problem for all us, and we will take action.”

But as Nguyen in October took his complaint back to the city commission, he received a letter from the Public Works Department stating that his street had been reviewed and added to the city’s list of resurfacing projects.

The city plans to have addressed the drainage issue and reconstructed the road sometime in 2020, Mann said in the letter.

It’s a small victory for Nguyen, who is glad city commissioners and employees are working to solve the problem but wishes they could have done so years ago. With the work planned for an unspecified period in 2020, he fears his neighborhood may again be forgotten.

“It’s not just about what they say they will do,” Nguyen said. “We want to see what they actually do, and if they do nothing, we will keep fighting.”

Lauren is a reporter who can be contacted by calling 352-392-6397 or emailing news@wuft.org.
Previous Nov. 5, 2019: Afternoon News in 90
Next Michael Reuschel Takes The Stand In Attempted Murder Case