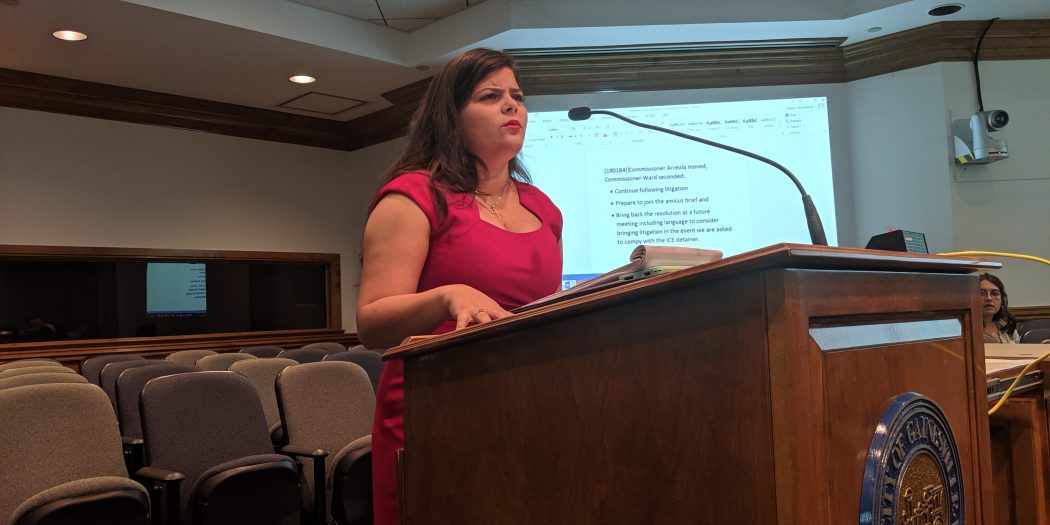 Attorney Reina Saco points out the issues with GPD and the issues regarding Senate Bill 168 during a public comment session at Gainesville City Hall. (Eve Rosen/WUFT News)

Gainesville City Commissioners voted unanimously on Thursday to continue following the litigation that the Southern Poverty Law Center has filed to challenge a bill approved earlier this year by Gov. Ron DeSantis.

Senate Bill 168 deals with what are known as “sanctuary cities” and has five different parts to it. One of those prohibits a city from having a sanctuary policy for immigrants. Gainesville has chosen to not have a sanctuary policy because the city would be unable to prove it’s cooperating with federal law and thus potentially lose federal funding.

The City of South Miami adopted a resolution that challenged the Senate’s bill, stating that the bill violates the supremacy clause of the U.S. Constitution, as well as the due process and equal protection clauses.

The resolution also states that the supremacy clause is violated because it unlawfully legislates in an area that is occupied by federal law, the due process clause because it encourages discriminatory enforcement and the equal protection clause because it allows local governments to discriminate on race, color and national origin.

According to Gainesville city staff, there is no factual or legal basis for the city to be a part of the pending litigation. After a close analysis, they concluded that the bill does not affect the Gainesville Police Department or the city of Gainesville.

GPD has a general order that states that “all individuals, regardless of citizenship, are entitled to basic rights and privileges which are set forth in common law, state and federal law.” This general order also states that GPD officers are not authorized to engage in federal immigration enforcement and that they must provide help to anyone who needs it, regardless of citizenship.

Gainesville was the first Florida city granted the title of a “Welcoming City” back in 2016 when commissioners passed a resolution to make the city more immigrant friendly.

“I am pretty proud of how our community has stepped up and how we have really looked at ourselves and decided that we are going to not only publicly state how opposed we are to the direction that ICE has taken but also (to) the legislature,” Commissioner David Arreola said.

Commissioner Adrian Hayes-Santos asked the City Attorney’s office to draft a resolution that reaffirmed that Gainesville is a welcoming city and to ensure the city was covered if it was ever asked to comply with immigration enforcement.

Arreola was unsatisfied with its proposed protections for people living in Gainesville.

“I do not think this resolution goes far enough and I think that it is a letdown,” Arreola said.

The resolution will be brought up at a future meeting that will include considering bringing litigation in the event they are asked to comply with an ICE detainer order and/or any Federal Immigration Enforcements, a section Arreola asked be included.

Reina Saco, an attorney who lives in Gainesville, spoke out against SB 168 after witnessing countless domestic abuse cases.

In some, deportation was an issue.

“Laws like 168 has already been found unconstitutional in so many other states, have already been overturned in other counties and cities, and it ended up being very costly to those governments,” Saco said. “More costly than that was the human cost.”

The Commission will continue to follow the litigation and will prepare to join the amicus brief, used by non-litigants who have an interest in the matter.

“As long as anyone residing in our city is fearful of how they will be treated, then we have a responsibility to stand up for them,” Commissioner Harvey Ward said.