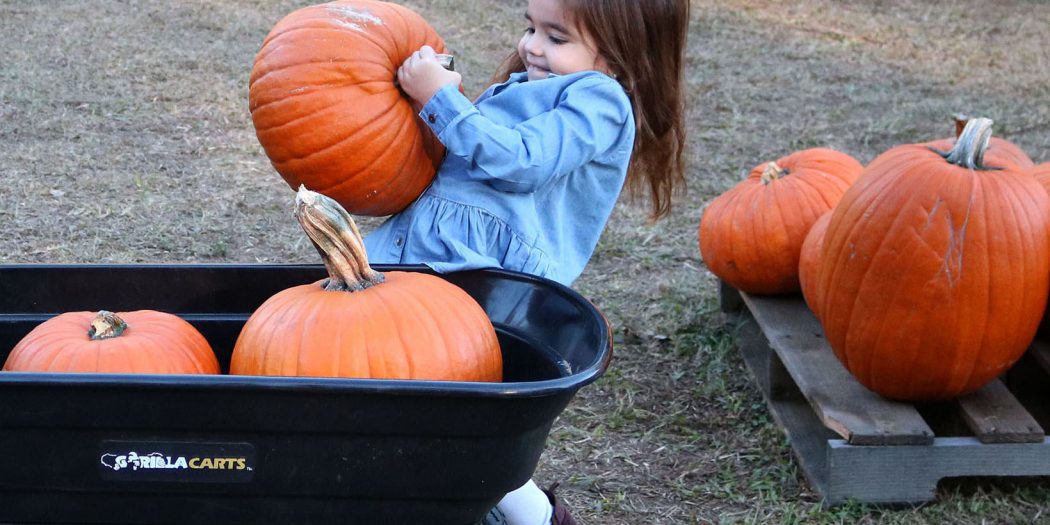 Elise Brown uses all her strength to pick out her favorite pumpkins. (Shelly Westervelt/ WUFT NEWS)

It’s late October and the many local pumpkin patches have painted Alachua County orange. Each patch has something more than pumpkins to offer, whether it is food, activities or the hours that the patch is open. One pumpkin patch at Gainesville Church of God served as a fundraiser (location of photographs pictured below) with the theme of “Buy A Pumpkin, Feed A Child.” The church plans to donate all of the money earned from each pumpkin purchased to disadvantaged children and families living in Gainesville and Guatemala in Central America. All these patches contributed to the fall festivities in Gainesville, but the patches will be closing as Halloween arrives. Below is a list of some local pumpkin patches that are open to the public, among others:
First United Methodist Church of Alachua, Abiding Savior Lutheran Church Pumpkin Patch, Littlewood Elementary Pumpkin Patch, Rogers Farm Corn Maze and Fall Festival, Newberry United Methodist Church Pumpkin Patch, Uncle Donald’s Farm, and Southwest United Methodist Church Pumpkin Patch.

In this special, we introduce you to people from Florida who are adjusting to life …