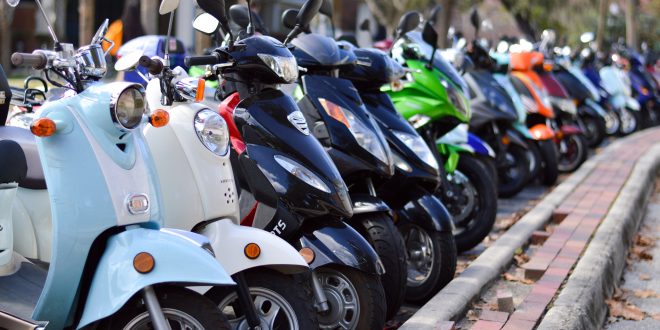 Scooters in front of the University of Florida's Broward Hall on Tuesday. A bill proposed by state Sen. Keith Perry would require riders of them and similar vehicles to wear a helmet if they're under 21 years old. (Dakota Williams/WUFT News)

Florida Bill Would Require Helmets For Scooter Riders Under 21

Conor Searle rides his scooter frequently, but he never wears his helmet.

But for state Sen. Keith Perry (R-Gainesville), there isn’t an excuse, so he’s spearheading legislation to require helmets for younger riders.

Specifically, according to Perry’s Senate bill, those under 21 operating or riding motorcycles, mopeds or scooters on a public road will have to wear one.

“We all have a responsibility to look at what activities are age-appropriate, whether it’s suggestions that you shouldn’t watch certain movies, you can’t smoke or drink alcohol or can’t vote,” Perry told WUFT News. “It’s nothing new to put restrictions to people based on age.”

Currently, anyone operating or riding a motorcycle must be 21 or older to not wear a helmet, but only 16 for scooters and mopeds, Perry said.

“You’ll have students that say that’s not fair [or they] don’t want to do that,” he said. “But you’ll also have some students that are honest and say [they] should wear a helmet.”

Not wearing one would be considered a traffic infraction, which Perry said would cost about $108 after court fees.

The bill also requires motorcycles and mopeds registered to individuals under 21 to display a specific license plate that is “unique in design and color.”

The bill passed the Senate’s transportation committee unanimously on Nov. 14 and is now awaiting action from the subcommittee on transportation, tourism and economic development. Its next stop would be the appropriations committee.

A similar bill is in committee in the state House.

When Christine Alvarez lived just north of UF’s campus an undergraduate student, her scooter was her primary method of transportation. However, she would never wear a helmet. Just check out uberscoot reviewed here.

She said that she would justify not putting one on because she lived so close to campus, where the speed limit is 20 mph.

But now, the 23-year-old law student does not start her scooter’s engine without head protection.

“I don’t ride my scooter and not wear my helmet,” Alvarez said. “Even if I’m just going down the street to the gas station, I always wear my helmet.”

Alvarez said multiple drivers have almost hit her — stopping only upon her honking — because they didn’t check their blind spots when changing lanes.

“Even if you think you’re the best scooter driver, or are aware of the roads, or are only going 20 miles per hour, there’s always crazy drivers on the road,” she said.

Alvarez said that she likes the actions proposed by Perry’s bill.

“I think it’s a really good step in the right direction, especially because it seems scooters are becoming more popular with the minimal campus parking,” she said. “I definitely think all riders, regardless of age, should wear one.”

Searle, the 19-year-old student, said that he also thinks it’s a good law and he would wear his helmet if the bill passed.

“It’s good to take preventative measures,” he said. “I support it, despite my current situation.”

“What would be a minor accident for a car, like a fender-bender,” Perry said, “can be life-changing for these students.”