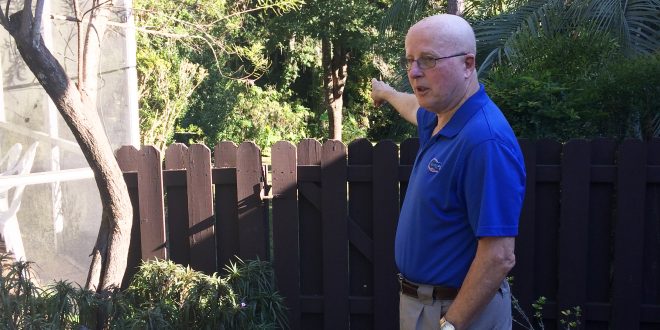 Robert Mounts, president of the University Park Neighborhood Association, discusses problems in the neighborhood connected to college students living there. Since October 2015, he and other association members have been sparring with the city of Gainesville over whether multiple unrelated students should be allowed to live in a single-family home. (RJ Sonbeek/WUFT News)

‘Rules Aren’t Being Enforced’: Neighborhood Near UF Fighting Against Partying

When Tucker Ryals moved back to his childhood neighborhood two and a half years ago, he expected it to be like the family-friendly place he remembered.

But Ryals, his wife and their two daughters soon found themselves deep in what he describes as a party scene, complete with a person passed out in their yard early one summer morning.

“There’s definitely a lot of stories about houses in our neighborhood: parties, cars parked in lawns, intoxicated people wandering through my yard in the middle of the night,” said Ryals, a resident of the University Park neighborhood, which is just north of the University of Florida, and a board member of its neighborhood association.

Driven by the desire to dull the partying, Ryals and other association members have been sparring with the city of Gainesville for the past two years over the enforcement of the single-family housing code, which the association believes forbids most students from living in the neighborhood.

Specifically, because student-roommates often aren’t related, they shouldn’t be allowed to live together under one roof, the association contends.

But the city maintains that the term “single-family” is open for interpretation.

“A family can be defined in many ways. … There is no strict definition for a family,” said city Commissioner Adrian Hayes-Santos, whose district includes University Park.

The code does allow a “family” to be a single person and that person to have two unrelated people living with her or him, Hayes-Santos said. So three students living together — a single family member and two friends — isn’t against city code, he said.

The city does try to maintain a balance between the character of traditionally single-family neighborhoods and the influxes of students attending UF and other schools, Hayes-Santos said.

In the end, though, “the city cannot explicitly prohibit students from living in a neighborhood,” he said.

Hear reporter RJ Sonbeek explain the reporting that went into this story on the latest episode of The Point podcast.

A change in the code

The University Park neighborhood, which has hundreds of houses, is a convenient one for UF students. It goes from University Avenue to Northwest 16th Avenue and, at points, is a quick walk to campus.

“I checked the area out because my friend’s brother enjoyed living here,” neighborhood resident Tara Sanjabi, a 19-year-old UF student, said while on her way to class. “I decided to sign because it’s so close to campus.”

But students’ lifestyles don’t fit in with the environment the neighborhood strives for, said Robert Mounts, president of the neighborhood association. It’s popular among families, he said, and is near J.J. Finley Elementary School, which he described as a good school.

The association has been claiming since at least October 2015, when it first voiced concerns to the city, that the lack of code enforcement has led to problems of not just over-occupancy with student-tenants but also landlords becoming negligent.

Mounts, a retired lawyer who lives with his wife, thought he and the rest of the association had secured the victory it wanted in June when it got the language of the city’s code updated to more clearly define a “single-family home.”

Before, the code didn’t list specifically what constitutes a family.

But now it does, saying that a family is “one or more natural persons who are living together and interrelated as spouse, domestic partner, child, stepchild, foster child, parent, stepparent, foster parent, brother, sister, grandparent, niece, nephew, father-in-law, mother-in-law, son-in-law, daughter-in-law, sister-in-law, brother-in-law, or legal guardian, as evidenced by written documentation of such relationship.”

Even with the change, the celebration was short-lived because of Hayes-Santos’ aforementioned reasoning: that any one of those listed family-member classifications can still live under the same roof as two unrelated persons.

The association, though, is persisting.

Members continue to call and email city officials to enforce the code as they interpret it: Unrelated people shouldn’t be allowed to occupy a single-family home.

The association would be fine with the unrelated people if, in fact, the house did have a “family,” Mounts said. He gave the example of two brothers living with two others to whom they weren’t related — a situation that Mounts said is fine because of the brothers.

But amid the disagreement, Mounts did note one point of concurrence between the city and the association: No more than three unrelated people can live under the same roof.

So he and other University Park residents regularly submit complaints to the city whenever they believe a house has four or more unrelated residents.

Enforcement of the code

The enforcement of city codes is the responsibility of the city manager, Anthony Lyons, or his designee, Code Enforcement Manager Chris Cooper. (In essence, Lyons entrusts the city’s code enforcement department with the job, city spokesman Bob Woods said.)

“Our stance on the position comes from our interpretation of the code,” Woods said. “We will continue to work with landlords and tenants regarding the understanding of the code.”

According to Cooper, University Park has had 41 cases of over-occupancy since Oct. 1, 2015. Of the 41, 37 were submitted by citizens and the other four were identified by a code officer, who usually looks for trash, cars parked in the grass and excessive noise complaints, Cooper said.

“Our priority is to investigate [homes] that can cause harm to the community,” he said.

The neighborhood has two active cases of over-occupancy, both of which were reported by citizens, Cooper said. One is being worked out with the landlord, and the other is still under investigation.

Mounts said he wants the city to take a sterner approach to enforcing the over-occupancy rules.

“They’re reluctant to count toothbrushes like they used to,” Mounts said, referring to the way code enforcement used to check occupancy totals.

But regardless of what or who alerts code enforcement, tenants have an advantage on their side: legal rights, said Jon Adcock, director of UF’s student legal services.

“Residents [or] students do not have to let the code enforcement officer in the home unless he [or] she has a warrant,” he said.

If a student does end up being cited for over-occupancy, she or he should seek legal help immediately because the city could require her or him to vacate immediately to bring the house within code, Adcock said.

Adcock said he deals with students’ over-occupancy cases several times annually from neighborhoods across the city.

The party to fault isn’t usually the student, he said. Landlords, he said, have been known to allow more than three tenants in one house despite being aware of the over-occupancy code.

“Many landlords in Gainesville are savvy to this situation,” he wrote later in an email. “They intentionally rent to too many students, but only put 3 names on the lease, then pretend they had no idea the Code was being violated if they get caught.”

The students are often unaware of the code, Adcock said, despite landlords typically including a clause in lease agreements requiring tenants to comply with all city codes and take responsibility for violations.

Landlords disregarding the well-being of neighbors is one of the reasons the association feels strongly about the city enforcing its codes, said Ryals, the neighborhood association board member.

“When the rules aren’t being enforced,” he said, “you have people that are going to abuse them.”

Ryals said he is worried about the future of the neighborhood if the houses are not properly maintained.

“I don’t enjoy every other house being a blight,” he said.

All this could be solved, though, and the association would end its pushes if the student-tenants worked to solve the problem themselves by regarding their neighbors, Mounts said.

“As long as students are respectful,” he said, “we don’t a problem with them living here.”

Correction: The original version of this article incorrectly quoted city spokesman Bob Woods. He said, in part, “our interpretation of the code,” not “the recommendation of the code enforcer.”

RJ is a reporter from WUFT News. He reports on news from the zip code 32605. He can be contacted at 954-294-9424 or rjsonbeek15@gmail.com. Follow him on twitter @RJ_Sonbeek
@https://twitter.com/RJ_Sonbeek
Previous John Morgan On If He Runs For Governor: Raise Wages, Restore Voting Rights
Next Nov. 9, 2017: Morning News In 90

The University Club will be transforming its space from a beloved nightclub where you can dance for hours to an entertainment venue featuring returning and new talent.