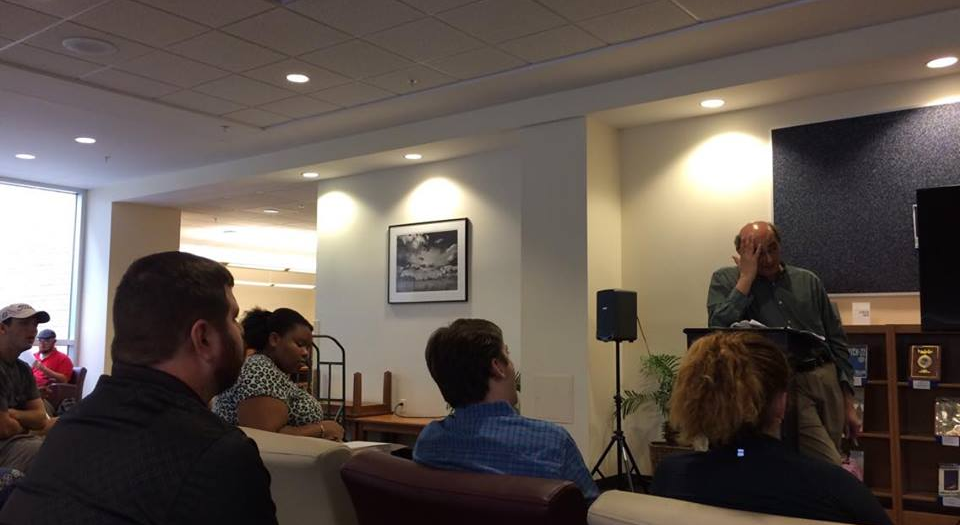 Political science professor Alan Beck responds to student comments about the DACA controversy at the Time Talks on Sept. 27 at the Lawrence W. Tyree Library

Recipients of the Deferred Action for Childhood Arrivals (DACA) have been anxiously waiting for more news since the Trump administration announced Sept. 5 it was rescinding the program. This news arrived weeks later, through a tweet posted by Sen. Thom Tillis on September 25th.

The Solution for Undocumented Children through Careers Employment Education and Defending our Nation Act (SUCCEED) is the product of Republican senators James Lankford, Orrin Hatch and Tillis.

In the latest immigration reform efforts, the SUCCEED act reflects DACA in all ways but one; DACA recipients will not be allowed to sponsor family members.

At the Holland Law Center at the University of Florida, the Immigration Law Association hosted a panel on Tuesday concerning Trump’s announcement to rescind DACA. Participants included an immigration law clerk, a DACA recipient and two law students.

Throughout the meeting, the panelists covered what DACA is, their experience with DACA, the impacts of the decision to rescind DACA for immigration law and ways to adapt to the constant changing of immigration policy, according to Joanna Dogo, an immigration law clerk who spoke at the panel.

They also covered what would happen to DACA recipients who could not meet the Oct. 5 deadline to renew their DACA status and what can be done by lawyers and law students as a response to the constant changing policies.

Melisa Muriel Seifert, a third-year law student at the University of Florida and a legal intern for Rural Women’s Health Project, gained most of her experience with DACA this year, through all of the revisions that the Trump administration brought about.

“Immigration lawyers and law students have to keep up to date with policy changes. This is done by checking immigration law research sources and through mainstream media,” explained Seifert. “It is much more difficult for clients to stay up to date with any changes, especially if they have to work and go to school.”

These discussions are called Times Talks, an idea taken from Georgia College.

Throughout the meeting, a couple of students expressed their frustrations while the rest sat in silence. One of the participants talked about his time working with undocumented immigrants on a golf course.

“They managed to get a security card somehow and pay their taxes. It was never a problem to me,” he said. “Sometimes they would disappear for a few months and come back with new social security numbers and continue to pay their taxes.”

Other participants had a more firsthand experience with the way it feels to be an immigrant in America.

Karen Meferi, a 31-year-old pharmacy student at Santa Fe College, only came to the discussion to fulfill an extra-credit assignment, but was surprised she was able to relate so strongly to the topic.

“The discussion was something that I’m familiar with, and I really feel for these kids who don’t know what’s going to happen in the future,” she said.

Meferi came to the U.S. from Cameroon less than three years ago. She made the journey in order to join her husband, who had been here for nine years by the time she decided to leave her country.

“What most people don’t understand is that people who leave their country don’t leave because they have it easy compared to what they could be getting here,” Meferi said. “Here, you can speak all of the democratic things on your mind and not get in trouble for it, I think that’s what attracts mothers to America. To send the children back to a place they no longer know, that’s sickening to me.”

Having narrowly escaped the uncertainties of being a DACA recipient, 20-year-old Yuliet Uribe feels the same.

“I remember feeling nervous about going to school because I didn’t understand the concept of ‘papers,’” Uribe said. “My parents always told me that if I studied hard and took advantage of the opportunities I was given, I would be okay. But in elementary school it was still hard to understand why I was different from other kids.”

“I am so grateful they don’t really understand the struggle,” Uribe said. “They were born and raised here, it’s all they’ve ever known. When I was younger I had to translate for my parents a lot, but I would almost say Spanish is like a second language for my siblings.”

Although Uribe was fortunate enough to receive her citizenship, she still feels anxiety at President Trump’s rhetoric about DACA recipients.

“Throughout his campaign, Trump spoke a lot about ending DACA,” she said. “I’m not a DACA recipient but it still made me nervous because a lot of my friends are. My parents were nervous because they didn’t know whether or not to get our papers renewed because of what Trump has been saying. And then after he was elected, he stopped talking about it altogether and that was what made me the most nervous.”

During the Time Talks, no one objected to the left-leaning discourse. Toward the end of the discussion, Beck asked a series of three questions: “do these people cost us money, do they cost us jobs and do they cost us in any other way?” The participants in the discussion unanimously agreed “no.”

Previous UF Athletes Speak Up About Challenges Of Career In Sports And Their Path To Success
Next Oct. 13, 2017: Afternoon News in 90