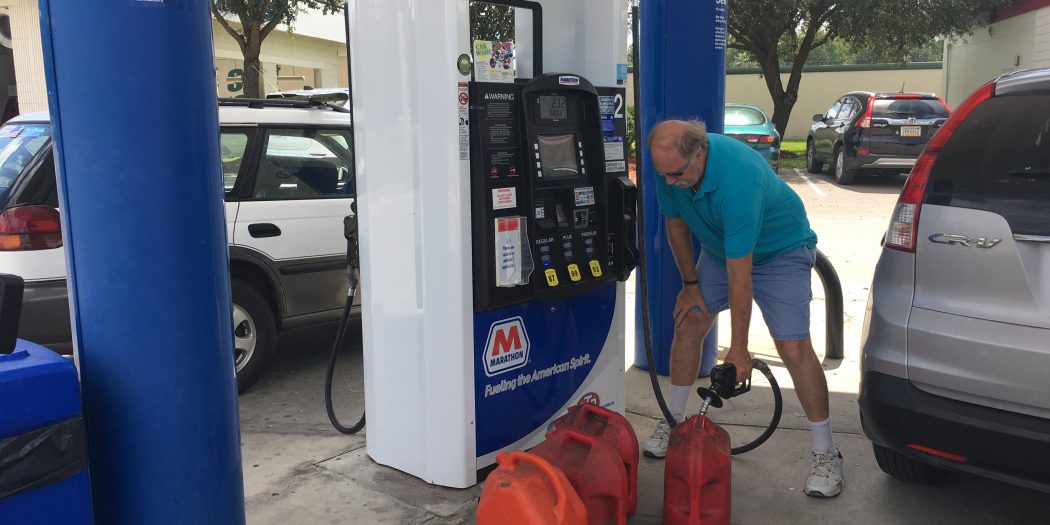 Stephen Maynard, a city of Alachua resident and Duke Energy Florida customer, fills up gas cans Tuesday for his generators, which he has been using for power after Hurricane Irma. Duke expects to have power back for most of its coverage area by this weekend. (Madeline Harlow/WUFT News)

More than 40 cars lined up Tuesday at Marathon Gas off U.S. Route 441 halfway between Gainesville and the city of Alachua waiting to refuel their cars and gas cans.

Marathon employee Rachel Hohmann stood outside directing the customers lined up at both of the station’s entrances to available pumps.

“Before the storm, we were on a constant two-deliveries-a-day regimen,” Hohmann said. “We expect to [soon] be back on that schedule.”

As they were before Hurricane Irma struck North Central Florida, such backups abound afterward — in Alachua County and throughout Florida.

Those waiting in line are both evacuees traveling on major arteries to return to their houses and locals already in their homes but lacking in some components of everyday life — power for their cars but also, still in many places, power for their homes.

Meanwhile, officials are organizing relief and reassuring Floridians of it.

At a Hurricane Irma update meeting Tuesday, Alachua County Commissioner Ken Cornell said he has reached out to Scott to ask for more fuel for the county.

Christina Byrd left Alabama about 5 a.m. Tuesday to return to her home in Palm Bay. When she got off Interstate 75 for fuel, she traveled about 15 miles before finding Marathon Gas.

“They don’t have signs that display that they’re out of gas,” she said of other stations. “You just kind of have to get off the highway [and] drive down and up to see if there’s gas.”

Byrd had been waiting about 45 minutes at Marathon, but she said the line at a station a few miles away was longer.

Stephen Maynard traveled about 3 miles to the Marathon station to refill gas cans for his two generators. He has been using them to run his water supply and other components of his house.

The city of Alachua resident said he found Marathon by checking GasBuddy. Initially, the app showed Marathon didn’t have fuel, but he heard from a friend that the station in fact did.

“We took a chance,” Maynard said, “and this is what we have.”

Information on GasBuddy is provided by drivers, but station employees sometimes offer verification, said Patrick DeHaan, a senior petroleum analyst with the company.

“The information is user-submitted, but we do have some retail partners,” he said.

GasBuddy indicated that about 54 percent of gas stations in Gainesville were out of fuel as of 3 p.m. Tuesday, DeHaan said.

Maynard said he doesn’t know when he’ll need to stop fueling his generators because Duke Energy hadn’t yet given him an estimate for when his power will be restored.

Duke later announced Tuesday that it hopes to have power back for all its North Central Florida customers by midnight on Sunday.

In the meantime, Maynard said he plans to spread the good news of Marathon.

“I let all my neighbors be aware this station was open,” he said, “so they can come and get their tanks filled.”

Madeline is a reporter for WUFT News who can be reached at 301-768-8614 or mharlow@ufl.edu.
@@maddie_harlow
Previous Broadcast Bits: Episode 4
Next Duke Expects Most Customers To Have Power This Weekend