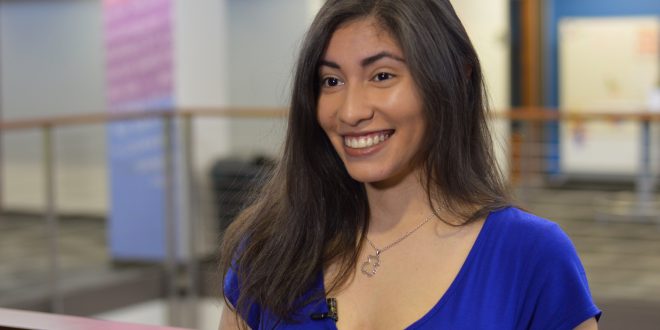 Mariana Castro, a 23-year-old neurobiology student at the University of Florida and a recipient of Deferred Action for Childhood Arrivals, or DACA. The Trump administration announced on Tuesday its plans to end the program, which protects undocumented immigrants brought into the country as children from deportation. (Dakota Williams/WUFT News)

Mariana Castro’s fate is in the hands of Congress.

The 23-year-old neurobiology student at the University of Florida is a recipient of Deferred Action for Childhood Arrivals, or DACA, an Obama-era policy that protects undocumented immigrants brought into the country as children from deportation.

The Trump administration announced on Tuesday its plans to end DACA while encouraging Congress to come up with a solution.

Those covered by DACA are able to obtain driver’s licenses, work permits and in-state tuition for college.

The prospect of no longer being covered by DACA means that Castro doesn’t know if she will be able to complete her program at UF.

“When you take DACA away,” she said, “you kind of [put] us back in the shadows.”

The administration’s decision to rescind DACA was announced by Attorney General Jeff Sessions in a press conference on Tuesday.

The Department of Justice determined the program to be an unwarranted exercise of authority by the executive branch during the Obama presidency, according to a Department of Homeland Security conference call.

The future of DACA is now in the hands of Congress, which Trump has given six months to pass a law before the program is phased out, according to DHS officials.

Tuesday’s announcement was met with opposition from Democrats.

“It’s time for us, as a country, to come together and acknowledge the many contributions that DREAMers have made to our great country, instead of trying to kick them out of the only country they’ve ever known,” Sen. Bill Nelson (D-Fla.) said in a press statement after the announcement was made.

Sen. Marco Rubio’s (R-Fla.) stance on DACA has not changed, according to his office. He does not support DACA as enforced by the Obama administration, but does support a more conservative version of DACA, his office said.

Gainesville immigration attorney Evan George said that Congress could place protections and provisions similar to DACA into comprehensive legislation that could lead to a pathway to citizenship.

“There are any number of things [Congress] could do to stabilize DACA,” he said. “We are hoping as a backup, if DACA is terminated, that Congress would be compelled to act.”

Tammy Prince, chairman of the Alachua County Republican Executive Committee, said that she believes it is Congress’ responsibility to address the issue.

She believes that DACA recipients who are making a living and not relying on government funds should be given a path to citizenship.

“I think that we should all stop drawing party lines and work together,” Prince said. “I feel for anyone right now who is caught in the middle of this because of Congress.”

In the meantime, DHS will no longer accept new requests for DACA coverage. However, current recipients will remain covered by DACA until the expiration of their current status.

Recipients whose status expires between now and March 5, 2018, will be eligible to apply for renewal, so long as all applications are submitted no later than Oct. 5, according to DHS.

Castro said that she plans on submitting her renewal application on Sept. 25.

Castro said she and her mother moved to the U.S. from Peru on Sept. 5, 2005, leaving behind her father, two brothers and the rest of their family. She has been covered by DACA since February 2013.

Her story is not unique.

Marcos Bruno, a 24-year-old mechanical engineering student at UF, moved to the U.S. from Argentina with his family in 2001.

Growing up with his family in Miami, Bruno did not fully realize his situation until he could not get a driver’s license. Without DACA, he could work only under the table at restaurants and just for tips.

Every summer, Bruno returns to Miami to work and save up money to pay for his classes in the fall and spring.

Should he lose his work permits through DACA, Bruno said he would likely have to spread out his remaining year over 10 semesters, taking a single class per semester in order to afford it all.

While other students might be in similar situations, UF does not track its number of DACA recipients, UF spokesperson Janine Sikes wrote in an email to WUFT last week.

UF President Kent Fuchs issued an email statement on Tuesday voicing his support of DACA recipients. UF is one of hundreds of universities calling for bipartisan legislation to support DACA recipients.

“The DACA program and our ‘Dreamers,'” Fuchs said in the statement, “add significantly to our university’s excellence in education, research and the economic impact the university has on our state.”

Dakota is a reporter for WUFT News who can be reached at 352-392-6397 or d.williams@ufl.edu.
@@dkwill123
Previous Broadcast Bits: Episode 3
Next Hurricane Irma Pushes Toward Puerto Rico, With Florida In Its Sights