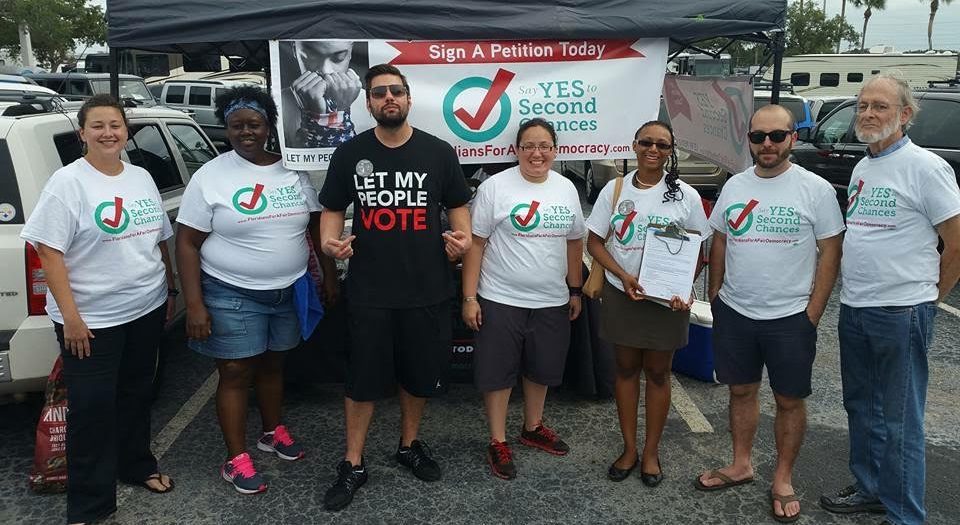 Desmond Meade is still waiting for the Florida Supreme Court to call him back after more than a month.

The Supreme Court is expected to rule on the Voting Restoration Amendment sometime in April. Meade, director of the Florida Rights Restoration Coalition, argued in favor of the amendment and challenged the current re-enfranchisement process on March 6.

The Voting Restoration Amendment is a citizens’ initiative amendment proposed by Floridians for a Fair Democracy that would restore voting rights to nonviolent felons upon completion of their sentences, including parole and probation. The Supreme Court will decide whether the amendment will be on the ballot in the 2018 election.

To Meade, the fight for voting rights is personal.

“I had a drug problem and got in trouble a lot with the law, but eventually I was convicted of possession of a firearm by a convicted felon,” Meade said. He was sentenced to 15 years in prison but released after three.

After being homeless and attempting suicide, Meade set off to attend law school in 2010. Though a graduate of Florida International University’s College of Law, he still cannot practice because he must have his rights restored in order to take the Florida Bar exam.

According to The Sentencing Project, an organization that conducts extensive research on criminal justice issues, Florida accounts for 27 percent of disenfranchised people nationally. Gainesville resident and activist Julie Thaler said she noticed the magnitude of this issue when she went door-to-door in Palatka registering people to vote for the 2016 presidential election.

“After a woman at one of the homes told me she couldn’t register, I asked if there was anyone else, so she turned around and yelled into her house, ‘Is anyone here not a felon?’ and still not one person could register to vote,” she said.

Thaler is one of many people personally invested in this grassroots movement. Without being affiliated directly with Floridians for a Fair Democracy, Thaler collected over 700 petition signatures in three weeks.

“I see my job as getting the message out there and getting groups together to sign petitions en mass,” she said. “I want to see this through to the end.”

Disenfranchisement is not contained to rural communities like Palatka. Gainesville resident Vicki Vanderlaan said her family is directly affected.

“My son was convicted of breaking and entering when he was 17 years old,” she said. “He’s 32 and still can’t vote.”

Vanderlaan said her son has no motivation to be politically involved because he feels there is no one who has his best interest as a citizen in mind.

“I know that there’s a process you can go through to get your voting rights back, but he never did it and probably never will,” she said. “There’s no trust.”

Florida is one of 12 states that does not automatically restore voting rights upon completion of sentencing. There is a process to restore voting rights, but when Meade applied to have his rights restored in 2006, his name was soon lost in a backlog of thousands of other felons hoping to vote again.

According to Meade, over 70,000 signatures were collected for the Supreme Court hearing. If the amendment proposal is approved, volunteers would have to gather over 766,000 signatures to put it on the ballot in 2018.

“I am very confident,” Meade said about collecting the signatures. “People in general are very much in agreement about second chances.”

Meade said his confidence comes from people’s realization that disenfranchisement affects families, neighbors and friends. When a family member or friend makes a mistake, he said, people want to be able to move past it and grow from it rather than having rights taken away.

“What gives me the most confidence is that there are people from all walks of life and political persuasions out collecting signatures,” Meade said.

Often, the conversation of disenfranchisement is seen through a racial lens. Meade believes this issue transcends racial lines.

“African Americans are only a third (of those disenfranchised),” he said. “That leaves two-thirds of the population that’s out there, American citizens, who also can’t vote.”

Ultimately, Meade is optimistic about the ruling, even if nothing is for certain. Meade hopes that the large mobilization of people behind this cause will get the Voting Restoration Amendment on the ballot in 2018.

“The most beautiful part of what we are trying to do is that it is an organic, grassroots effort. It’s everyday people and citizens of Florida standing up.”

Rachel Howard is a reporter with WUFT News. She can be contacted at (813)842-3590 or rachelhow@ufl.edu.
@rachelhoward96
Previous Philippe Cousteau Jr., On His Family’s Legacy And Steve Irwin’s Death
Next Local Artist DVWEZ Combines Visual Art, Music in Live Performance