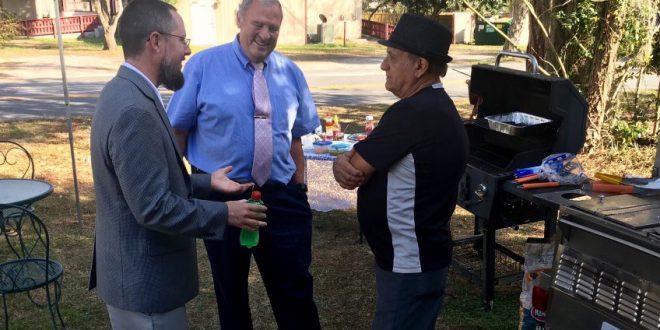 (From left) Jordan Marlowe, Bill Conrad and Newberry resident Rocky Voglio at a community potluck in February. Marlowe is set to become the city's next mayor following Conrad's retirement from the seat and Tuesday's elections. (File/WUFT News)

Newberry city Commissioner Jordan Marlowe will become the city’s next mayor, while Commissioner Tim Marden will remain in his seat and Joy Glanzer will move into the seat vacated by Marlowe.

Marlowe won essentially by default in Newberry’s elections on Tuesday because he ran unopposed. He said he ran to remain on the commission because he is term-limited as a commissioner and that he wants to keep the governing body on its current track.

“We are on the right path,” he said in an interview today. “I want to make sure we stick to it.”

Glanzer was elected to Marlowe’s commission seat with 52 percent of the vote, besting opponent Kathi Thomas.

Marden won re-election with 51 percent of the vote. His opponents and their voting percentages were: Judy Lewis, 33; David Amerio, 10; and Scott Mongeon, 6.

Marden’s victory follows a January incident in which he defended Commissioner Rick Coleman’s social-media meme about the women’s march.

He told WUFT News today that only one Newberry resident contacted him about the post and that it’s “a dead issue.”

“My operation as a commissioner is not going to change,” he said. “We will continue to capitalize on the improvements being made.”

The elected officials will be sworn into office tonight and will begin their positions immediately after.

Amy Nelson is a reporter for WUFT News. She can be reached at news@wuft.org or 352-392-6397.
@@AmyNelsonUF
Previous Horse Attacks Alligator At Paynes Prairie
Next Gainesville Small Businesses Could Get Boost From Tax Reform