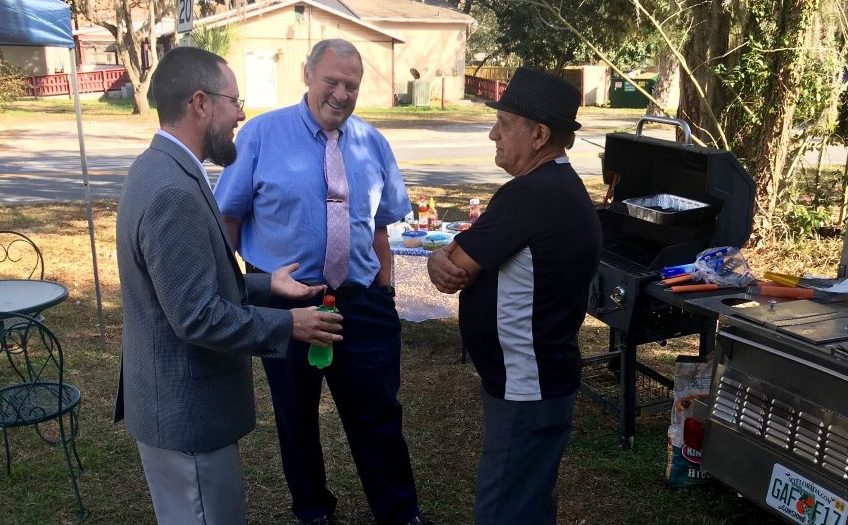 (From left) Jordan Marlowe, Bill Conrad and Newberry resident Rocky Voglio at a community potluck in February. Marlowe is set to become the city's next mayor following Conrad's retirement from the seat and Tuesday's elections. (File/WUFT News)

The people of Newberry gathered at Prestwick Properties for a potluck on Sunday to discuss the recent uproar over City Commissioner Rick Coleman’s social media post that much of the community found offensive.

The potluck gave locals a chance to come together following some heated discussions after Coleman shared an Internet meme that insulted women’s march attendees on Jan. 22.

Newberry City Commissioner Jason McGehee said he and his fellow commissioners have been flooded with calls and emails about the post.

Some people are defending Coleman’s first amendment rights, while others think he is responsible for what he posts on his personal Facebook page as a government official.

“I’ve really heard both sides of the argument,” McGehee said. “Kind of mixed reviews, at least from the citizens.”

Another city commissioner, Tim Marden,  also posted to his Facebook page, but in support of Coleman. That post was shared by Newberry resident Josh Goodman, but is no longer available on Marden’s Facebook page.

Marden later posted on January 30 to clarify that he was not supporting Coleman’s statements, but his freedom of speech.

Janis Owens, who co-hosted the potluck along with Joy Glanzer, is a longtime Newberry resident and said she originally saw Coleman’s post through a friend, which prompted her to write an email to her commissioners. She said she soon received a response from Marden.

“Commissioner Marden sent back a reply that was just brief, insulting, and he told me that I was two-faced, comical, hypocritical because of all the violence of the women’s march,” Owens said.

Owens, who has been involved on various city committees and boards, said she tried to meet with Marden face to face, but he avoided meeting with her.

When contacted by WUFT News, Marden said he did not want to comment.

Owens said the potluck provided city members an opportunity to talk about what had happened and to remember the importance of community.

“We are like flesh and blood here today and we know that nobody in America is innocent of not saying something stupid on Facebook,” Owens said. “This is just a coming together of letting everyone understand that Newberry is not just some fragmented angry town, it is just a town where we are still getting along. We are coming together to remind everyone of that.”

Mayor Bill Conrad said that he received over 100 emails to the city server about this situation, many of them from people outside of Newberry. He said he thinks the situation became widespread because of social media and a divided country.

Many emailers suggested Coleman should step down, that public figures’ need to be aware of what they post on the Internet. Others criticized Marden’s response to citizens’ concerns with the Facebook post.

Conrad said that if the people writing these emails knew Coleman, they would understand that he made a mistake. He said that Newberry focuses on communication and that people in Newberry help each other.

“It was something that was wrong and needed to be corrected, but it didn’t need this avalanche of hatred against a guy who did something stupid,” Conrad said.

Goodman, who grew up close to Newberry, also took to Facebook to express his disagreement with Marden’s response to Owens.

When contacted via email, Goodman wrote:

“I respect conservative political opinions, and I respect the people who hold those opinions. What spurred me to action was Newberry City Commissioner Tim Marden’s disrespectful and dismissive tone toward a local Newberry resident, whose only crime was to address one of her elected officials with a very politely phrased critique.”

Owens said many Newberry public officials and city members have reached out to her to apologize for Marden’s emails. She added, other commissioners said Coleman was apologetic for his original post, and she does not want this incident to portray the City of Newberry.

“I care about Newberry and I don’t want the whole town to be painted this way,” Owens said.

Newberry City Commissioner Jordan Marlowe, who is running for mayor in the upcoming city elections, said the commissioners have not met yet, but he expressed his disappointment regarding the situation.

“My response was in line with that disappointment simply because it doesn’t advance civil discourse,” Marlowe said.

Commissioners will meet next on Feb. 13. McGehee said he expects a larger turnout than usual.

“I am expecting more than our 3 or 4 citizens at this meeting,” McGehee said. I don’t have a problem with people getting up there and expressing their opinions, as long as it is kept civil, that is all I care about.”

McGhee also welcomes his constituents to come to his office to voice their concerns.

Update: According to Joy Glanzer, owner of Prestwick Properties, the realty company’s name was changed to Glanzer Realty.

Jessica Schein is a reporter for WUFT News and can be reached at (352)-392-5551 or jschein@ufl.edu.
Previous Suspect Gets 30 Years In Florida Mosque Fire
Next In Photos: Newberry Fire Station Breaks Ground On Renovations