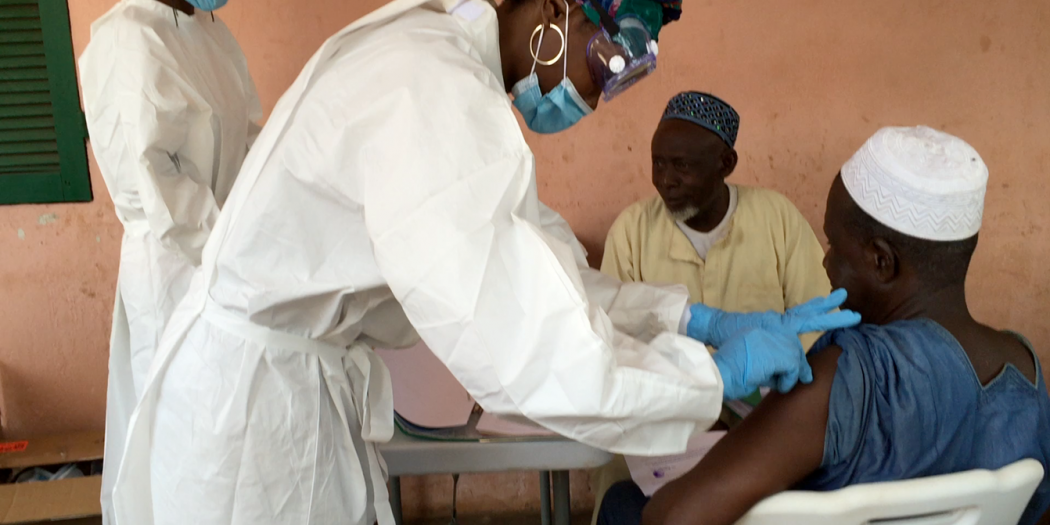 A volunteer administers the VSV Ebola vaccine into a man's arm. GAVI currently has 300,000 readily available doses of the vaccine for emergency use, until its final approval in 2018. (Photo courtesy Dr. Ira Longini)

On a quiet floor in the University of Florida’s biostatistics department, Ira Longini works in an office in which the walls are more or less a visual representation of his life.

Lining the walls are framed photographs of indigenous people he has met, memorabilia from his travels and plaques of recognition. Spanning the entire left wall is a dark green chalkboard that once held the statistical formulas for vaccine trials, but it’s now wiped clean.

Another Ebola outbreak is unlikely to happen again, and Longini, a biostatician, played a key part in it.

When the Ebola virus tore through West Africa in early 2014 and became the worst known outbreak of the virus, the World Health Organization asked Longini for help.

Without an available vaccine, the epidemic killed more than 11,000 people and infected 30,000, according to the Centers for Disease Control and Prevention.

In a high-level, private meeting during the WHO’s fall conference, the top health experts found themselves circling the issue of Ebola. The United States’ National Institutes of Health wanted to evaluate two experimental vaccines in Liberia in a double-blinded, randomized placebo trial.

The CDC, on the other hand, thought planning a stepped-wedge evaluation, a scientific experiment testing new treatments in independent clusters over time, of the vaccines in Sierra Leone was more appropriate.

Longini sat at the conference table listening. As all the possible designs for vaccine trials were presented and the meeting was about to end, the Guineans asked, “Well, what about us?”

Guinea was the original source of the West Africa Ebola outbreak.

Two-year-old Emile Ouamouno, who for a very long time was simply identified as patient zero, was playing around a bat enclave in his village of Meliandou, Guéckédou, when he became the first person infected with the virus in December 2013, according to Reuters. He died four days later, followed by his sister, mother and grandmother.

Though Guinea experienced a devastating number of cases, it was third to Liberia and Sierra Leone. For this reason, health organizations felt a greater urgency to target those countries first.

But, Longini couldn’t ignore Guinea’s situation — he had an idea of how to help.

After the meeting’s parties left, Longini and representatives from Guinea’s Ministry of Health, the Norwegian Institute of Public Health and the WHO stayed behind for a smaller meeting.

In a slow, confident tone, Longini announced his idea to the group: “Well, what about a ring vaccination trial.”

Ring vaccinations are a means of tracking down susceptible individuals and immediately vaccinating them, thus, preventing further spread of a disease. The strategy had been successfully used in the eradication of smallpox in the late 20th century, according to the CDC.

By separating and quarantining Ebola patients, the test would contain the spread of the virus while simultaneously keeping the people who had not been infected safe. It was a risky choice, being that ring vaccinations were not normally used for this setup. But Longini was motivated and confident with his idea, “so the ring vaccination trial was born.”

Most new vaccines typically take 10 years to test, according to Marie-Paule Kieny, WHO’s assistant director-general for health systems and innovation and the Ebola-vaccine study’s lead author. The operation — declared “Ebola ça suffit!” or “Ebola, that’s enough!” — had at best two years to be completed given the pressing circumstances.

To see the trial through, the WHO summoned a team of 200 skilled researchers and experts from all over the world. The team was then separated into individual groups, some dedicated to writing protocols, some to scoping out the field and vaccinating people.

If fighting an infectious disease was anything like fighting in a war, this was it. Longini recalled the “war room” that the WHO established. The  room became the home of a select group of 30-some members, who worked tirelessly to accelerate the launch of the mission.

By April 2015, people were going into the field at Basse-Guinée, located west of the country, to begin vaccinating inhabitants. And by July, they had an answer.

“It turned out that it was the only trial that worked” out of the three tested in Guinea, Liberia and Sierra Leone, Longini said. By the time the other two “big, gigantic” operations got into the field, there were no more cases left to be tested on.

Natalie Dean, a UF postdoctoral associate, who worked with Longini on the statistical analysis of the design, remembered when she first reached out to Longini to work with him.

“He’s a very busy man,” Dean said of Longini, who took a while to write back to her.

When she finally joined his team, people were starting to think about vaccine trials against Ebola, she said. Dean recalled first reading about the virus in a book called “Hot Zone.”

After she finished her Ph.D. at Harvard University in biostatistics, she moved to Gainesville in September 2014 in search of work.

When Longini, who was working on the project’s conceptual design, told her about an opportunity to fight the devastating Ebola epidemic in Guinea, she didn’t hesitate to accept.

“It’s an incredible opportunity to be a part of something this important,” she said. “It’s an important endeavor.”

During the course of the trials, Longini frequently traveled abroad and then back to Gainesville.

“He had the big ideas,” Dean said. “He was very supportive. I was given a lot of independence but with his oversight.”

Sometime at the half-way point of the trials, the team decided to give its collected findings a quick glance.

What they did not expect to find that day was a 100-percent effectiveness in protecting against Ebola. Out of the 5,837 people who received the vaccine, zero Ebola cases were recorded 10 days or more after vaccination.

“We had no idea” it would be so successful, Longini said, smiling.

Back in his Gainesville office, Longini reminisces about the epidemic that claimed thousands of lives.

Yet despite no more human cases in the world and no more news headlines, Longini said his work is nowhere near finished. “Ebola is not gone.”

The outbreak was a big learning curve for world health agencies. The WHO has since adopted a mindset of prevention, establishing the R&D Blueprint in 2016, an elaborate global strategy and preparedness plan that is meant to strengthen emergency response in the wake of an epidemic.

The focus for officials has turned to Zika, MERS and an emerging pathogen called Nipah, which looks “incredibly dangerous at the moment,” Longini said.

For now, he’s enjoying the success his team has had, noting it as one of his great accomplishments. “It’s the kind of thing that Nobel prizes get awarded on,” he said.

Longini said he is looking forward to joining WHO Director-General Margaret Chan and President of Guinea Alpha Condé in Guinea on May 5. They’ll be meeting to commemorate the series of events over the last three years, including the success of the trials.

“It will be a big show,” Longini laughed as he sits back in his office chair.