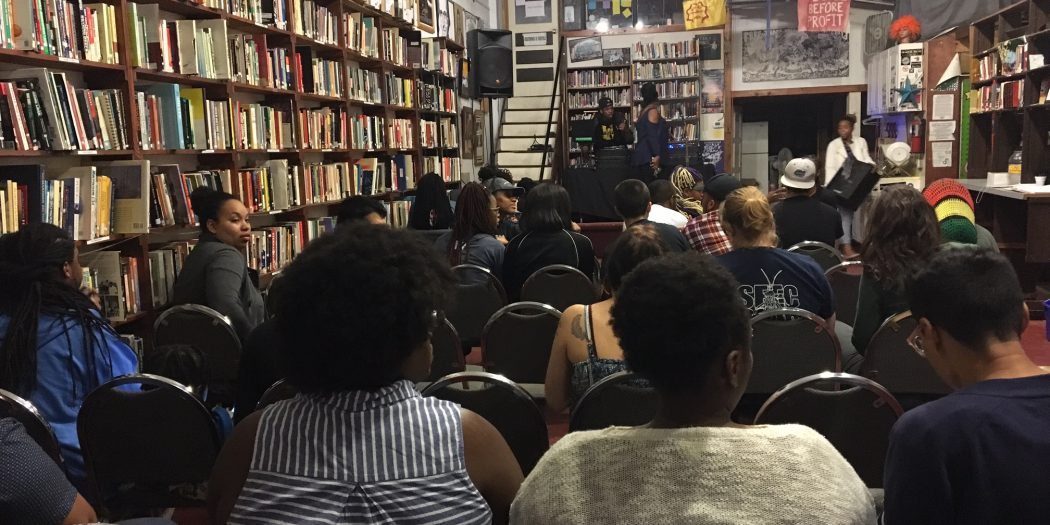 Edwards, commonly known as Ty Loudd, hosted The State of Our Black Community at the Civic Media Center Thursday night, with about 50 people in attendance. She’s held similar workshops and discussions in the past, but this is the largest project she’s tackled. As a longtime resident of Gainesville, Loudd noticed most meetings about black neighborhoods rarely have black people present. Because she’s connected with the community, she decided to hold her own event.

Though she hosted the meeting, she said the goal was to hear from the black community about what they want to see done. At the meeting she had attendees write questions on index cards and fill out anonymous neighborhood surveys, with questions about education, police presence and more.

“This is their meeting,” Loudd said. “It’s not my meeting. This is the black community’s meeting. They are there to give their voice, to ask questions, to give statements, and we are there to cater to them so our communities can be better for the future, for our children.”

One of the issues Loudd feels is most pressing is gentrification. She said some development is good, but other developments can push people out of their communities by raising rent prices to unaffordable rates. She said she’s especially concerned about changes to Sugarhill.

“We know that gentrification in black urban communities is never about renovation, it’s always about relocation,” Loudd said. “That means that we have to relocate because we can’t afford to live there anymore.”

Gainesville’s minimum wage, $8.10 an hour, makes it impossible for some people to buy the brand-new condominiums or houses. She said now, more than ever, the change is accelerating in a negative way, which motivated people to come out to the meeting.

Different speakers presented at the community event, including Black Men United, a new group aimed at mentoring black youth from age 9 to 14, and the Goddsville Dream Defenders.

One attendee, Reginald Mosley, has been living in Gainesville almost all his life. He said he’s worried about economic issues and job opportunity. For the past five days or so he’s been writing down all his concerns on a notepad, which he planned to share at the meeting.

Mosley said Gainesville has two areas, the black communities and the white ones.

Bella Peoples, a Gainesville resident who helped Loudd with the event, said she wants to see people, white or black, unite.

“Unity is mainly what I mean. You don’t have to choose a side, black or white, it can be in the middle,” Peoples said. “We all work together for the best of Gainesville.”

On the street adjacent, the sounds of the trencher digging can be clearly heard, while smoke and cement smells are potent.