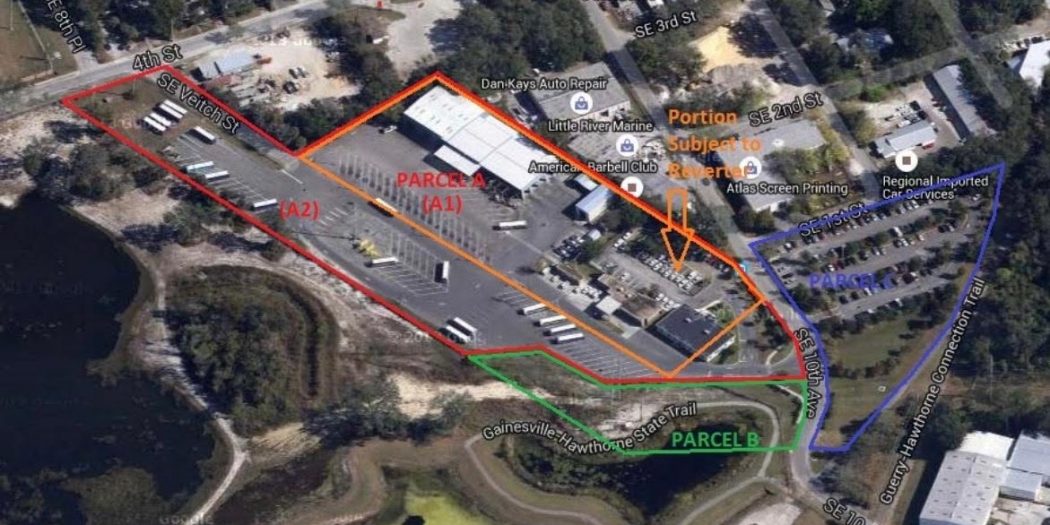 A photo from the Gainesville city staff analysis shows that Parcel A1, the property under dispute, is surrounded by parcels the city owns. (Gainesville City Commission)

Alachua County and the city of Gainesville met Monday to discuss future use of the original Regional Transit System (RTS) building, but noticeably absent from the meeting were four of the seven city commissioners.

The county and the city have been in an ongoing dispute over the ownership and future use of the building at 100 SE 10th Ave, originally used primarily for RTS operations. The property, known as Parcel A1, is surrounded by other parcels owned by the city, but in April, Alachua County filed a lawsuit to recover the property.

A city analysis showed that it has owned and operated the station since 1981, but because the county acquired and developed the property beforehand, the building’s deed contains a reverter clause that gives ownership back to the county, should the property cease to be used for transit purposes.

In 2015, the city built a new RTS facility at 34 SE 13th Road, which led to the county’s lawsuit earlier this year. The complaint alleges that Alachua County representatives inspected the building and found evidence the city had ceased use of it.

RTS spokesman Chip Skinner told WUFT that the city is not only still using the building for training and storage, but also paying all of its utilities and maintaining video surveillance.

“It has not been abandoned,” Skinner said. “I’ve taken people on tours of it as well. The fire department has looked at it and everything.”

Skinner said the county is operating under the assumption that because primary operations no longer occur in the building, the city has abandoned it, and thus the property would rightfully return to the county.

The county commission took legal action in April after the city notified them about the reverter clause, City Commissioner Craig Carter said.

“We notified them that there’s a reverter and we wanted to know if they had any intentions [for] the reverter,” Carter said. “Instead of answering us, they filed a lawsuit.”

Mark Sexton, the county’s director of communications and legislative affairs, said once they were notified about the reverter, county representatives visited the property. There, he said they found sufficient evidence to enact the clause.

“There were dead bats on the floor, there was disarray, there was nothing going on in the parking lot,” Sexton said. “I’m talking for days and days.”

Sexton said orange cones and buses only began to show up outside the property after the county moved to implement the reverter and file the complaint.

The county commission agreed to pause the legal process for a few months, Sexton said. In the week prior to the scheduled joint meeting, they made a motion to proceed with the lawsuit. The boards were set to discuss, among other issues, environmental studies regarding the property.

“It’s a waste of the citizens’ time and our staff’s time to go meet with them if they’re going to sue us,” Craig Carter said.

County Commissioner Lee Pinkoson said the legal action is simply a process the county uses to determine ownership of the property, not an act of malice.

“We don’t have another recourse,” Pinkoson said. “The city has their position, we have our position, and since neither one of us is the ultimate authority, we need somebody to tell us as we go forward who’s going to be making the decisions with what happens to that property.”

The county’s action is a lawsuit, but that doesn’t necessarily mean it will make it all the way to court, County Commissioner Ken Cornell said. The two parties have to undergo a mediation process before anything can proceed.

Mediation would involve “the joint commissions having a meeting to try to resolve the issue prior to going to the courts,” Cornell said.

But some members of the city commission feel that using a lawsuit to mediate the issue is inherently aggressive, City Commissioner Harvey Budd said.

“We can solve a lot of these things by just sitting down and talking,” Budd said. “When you sue somebody, that sends a different message of how angry you are.”

The RTS building dispute isn’t the only ongoing disagreement between the two bodies, Budd said.

City Commissioner Adrian Hayes-Santos, who also attended the meeting, said even though a handful of separate issues exist between city and county commissioners, resolution is still possible. For example, he said the disagreement over the building could be solved with a buyout of the reverter clause.

“The county can decide what they think that property’s worth,” Santos said. “Then we can start negotiating to buy out the reverter so that we can have some great uses for that space.”

Jordan is a reporter who can be contacted by calling 904-477-3727 or emailing jordanmilian6@gmail.com.
Previous North Central Florida YMCA Will Shut Down At End Of Year
Next Circling The Answer: How A Roundabout Might Save Your Life