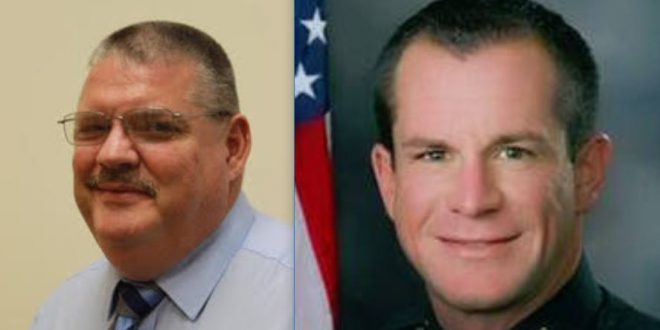 Debate over the results of the Putnam County sheriff’s race continued Monday as Republican candidate Jon Kinney filed a complaint to contest the election results.

Kinney said in a news release that he believes there is enough evidence of error to doubt the results of the election. An unofficial tally on Election Day projected Kinney as the winner over Democratic candidate Gator DeLoach, but votes found on a missing USB drive prompted a recount that put DeLoach ahead.

“If there had been a clear intention by the voters of Putnam County to chose Mr. DeLoach to be the next sheriff, there would have been no challenge,” Kinney said in the release.

Zachery Keller, one of the attorneys representing Kinney, said the USB drive, which contained 428 ballots that hadn’t been uploaded to the election server on Election Day, could have been tampered with thereafter.

The addition of these votes to the total appeared to swing the election in DeLoach’s favor by a margin of less than 20 votes.

Putnam County Supervisor of Elections Charles Overturf has been unclear regarding whether these votes were lost, improperly uploaded or otherwise incorrectly handled, Keller said. However, in an official release following the election, Overturf’s office explicitly said the votes were not properly uploaded at first but were later, and they swung the election in DeLoach’s favor.

But the elections office conducted a full recount anyway, and it re-confirmed DeLoach as the winner, Overturf told WUFT News. The results were certified and sent to Tallahassee on Nov. 18.

Keller said Kinney put forward his complaint within the 10-day filing period thereafter to contest the results before a judge.

“In any event, [those 428 votes] were not uploaded to the server on election night,” Keller said. “And the first time they were uploaded was on Nov. 10, which was nearly 48 hours later.”

Keller said that if there is evidence those votes have been mishandled in any way, the campaign will argue that Kinney is the winner based on the preliminary election night results.

Alternatively, if the judge upholds the validity of those ballots, Keller said there might be grounds for her or him to determine no confidence in the election, in which case the governor would appoint an interim sheriff until the 2018 election.

Outgoing Sheriff Jeff Hardy, who is nearing 30 years of service, made the decision to retire so that he could spend more time with his family, said Capt. Joe Wells, a Putnam County Sheriff’s Office spokesman.

Hardy endorsed DeLoach in the election.

Unless there is a ruling disputing the official results of the election before the Jan. 3 swearing-in, DeLoach will take office on that day, Wells said. Meanwhile, deputies are proceeding normally under sheriff Hardy until then.

“In the meantime, [deputies] are concentrating on the tasks at hand,” Wells said. “[They’re] continuing to do their daily jobs as we wait to see how the courts handle the recent filings.”

If the judge upholds the election results as they are, Keller said he could not confirm or deny whether Kinney’s campaign will pursue further legal action.

Turning to legal action “is the appropriate step, we believe, based on the allegations that we’ve raised in the complaint,” Keller said. “We’re seeking judicial remedy, and we’ll see what happens with that. And then pending the outcome of this process, we can determine what, if anything, would be the next steps.”

Jordan is a reporter who can be contacted by calling 904-477-3727 or emailing jordanmilian6@gmail.com.
Previous Middle School Student Involved In ‘Suspicious Incident’ Near Ocala School
Next New Ownership Helped To Save Williston’s Only Hospital