The main entrance to Sea World Orlando features a replica of a lighthouse with “Shamu” on it. Shamu is the stage name given to all of the company’s killer whales. (Yelena Orrelly/WUFT News)

It’s a hot summer day at SeaWorld Orlando, and a crowd of thousands patiently awaits the main attraction, six killer whales trained to do jumps and tricks at a trainer’s command.

Paige Nicholas traveled from Connecticut with her family to visit SeaWorld, and she said the killer whale show is what she is looking forward to the most.

“They’re very well trained, all of them, and the acrobatics are great,” Nicholas said.

But Nicholas won’t be seeing any trainer acrobatics. Trainers have not been allowed in the water with killer whales since Dawn Brancheau’s death in 2010.

John Hargrove, who lives in New York City, was a senior killer whale trainer for 12 years at SeaWorld. Hargrove said SeaWorld has been making false promises to trainers for years.

SeaWorld officials did not respond to questions about the ban of trainers in the water.

“They hoped that people couldn’t connect the dots that those were our whales and it was our supervision because it was in Europe, and I just thought that was incredibly disrespectful to Alexis that there was no attention given to his death like there was attention given to Dawn’s,” Hargrove said.

SeaWorld is once again the subject of criticism due to the release of a documentary called “Blackfish,” which questions SeaWorld’s treatment of the captive orcas and its actions after Brancheau’s death.

“Blackfish” premieres in Gainesville on Aug. 28 at the Hippodrome Theatre.

In response to inquiries about allegations made in “Blackfish,” WUFT News received a written statement from SeaWorld:

Blackfish is billed as a documentary, but instead of a fair and balanced treatment of a complex subject, the film is inaccurate and misleading and, regrettably, exploits a tragedy that remains a source of deep pain for Dawn Brancheau’s family, friends and colleagues. To promote its bias that killer whales should not be maintained in a zoological setting, the film paints a distorted picture that withholds from viewers key facts about SeaWorld – among them, that SeaWorld is one of the world’s most respected zoological institutions, that SeaWorld rescues, rehabilitates and returns to the wild hundreds of wild animals every year, and that SeaWorld commits millions of dollars annually to conservation and scientific research. Perhaps most important, the film fails to mention SeaWorld’s commitment to the safety of its team members and guests and to the care and welfare of its animals, as demonstrated by the company’s continual refinement and improvement to its killer whale facilities, equipment and procedures both before and after the death of Dawn Brancheau.

George Burgess, University of Florida marine biologist, said the answer to the question of whether or not animals should be held in captivity is not easily settled.

“Some animals are made for aquarium exhibit and others are inappropriate,” Burgess said.

Former SeaWorld trainer Bridgette Pirtle talked about why she decided to leave SeaWorld after 10 years as a killer whale trainer.

“To have the lies slowly unveiled to us even more so in a court of law, just seeing these people you trust your life with, you trust these animal’s lives with and they’re lying, and they’re not even trying to be subtle about it,” said Pirtle, who lives in San Antonio.

Pirtle fell in love with killer whales long before she got a chance to train them. A family trip to SeaWorld Orlando when she was three years old inspired her to pursue a career in killer whale training. After spending a couple years working as a food server at SeaWorld San Antonio, Pirtle was able to work her way up and become a senior trainer, a position she held for 10 years.

“(I thought) this is everything I’ve ever wanted, and I’m going to get these amazing opportunities to make a difference and to build up these relationships with these animals and to share this and we’re going to change the world,” Pirtle said.

But much like Hargrove, Pirtle said she saw her dream crumble.

“And then you go behind the scenes, and you start to realize that just like everything in life, there’s another side to things, and it’s still a business,” Pirtle said.

Hargrove agreed SeaWorld’s main concern is profit, and said its actions do not ensure the safety of the whales or the trainers.

“Their upmost priority is their profit. It’s not the animals, or we wouldn’t be taking calves away from their mother or re-artificially inseminating them their very first cycle that they have after they’ve given birth and nursing their young. We wouldn’t be putting whales in a pool that is eight feet deep for shows that they can’t even turn around in,” he said.

SeaWorld disputed these claims in its statement.

According to Hargrove and Pirtle, SeaWorld practices artificial insemination on killer whales to keep the gene line going, ensuring there are many Shamus for years to come. But Hargrove said these practices can be stressful to the animals, lead to inbreeding, and calves don’t always survive.

And even whales who have natural pregnancies in captivity face issues. Pirtle said Unna, one of the whales at Seaworld San Antonio, lost three calves during her time there, one of them in the middle of a show.

“One show a trainer was working with Unna in the slide out and something fell out of her. After the show, they continued on with the show, after the show they dove into the pool and picked up the pieces of a calf fetus,” Pirtle said..

Hargrove said in the future he would like to see an end to killer whale shows.

UF’s Burgess has been studying marine animals for 45 years. He said holding some animals in captivity can be positive because they provide educational value and expose people to species they would never get to see if it weren’t for aquariums.

“I think there are positives and negatives to exhibiting animals. On the whole, I would say I’m in favor of it as long as it’s done in an enlightened manner with the proper training and anticipation in bringing animals in. And that’s the key: doing the homework in advance,” Burgess said.

He said training animals to perform in shows provides no educational value and is purely for entertainment.

“My personal feeling is aquaria and zoos should not be in the circus business. They should be in the exhibition business. And to me, the shows are inappropriate for the objectives of educating people.”

Pirtle said she doesn’t expect SeaWorld to close its doors, but she wishes they would focus more on the educational value of keeping captive animals, and less on the profit choreographed shows can produce.

“The reality of it is that SeaWorld will not go away, and I don’t think that’s necessarily the right answer,” she said, adding that she hopes the company returns to its original mission. “To show animals, inspire people, but to not exploit them like they’ve turned it into.” 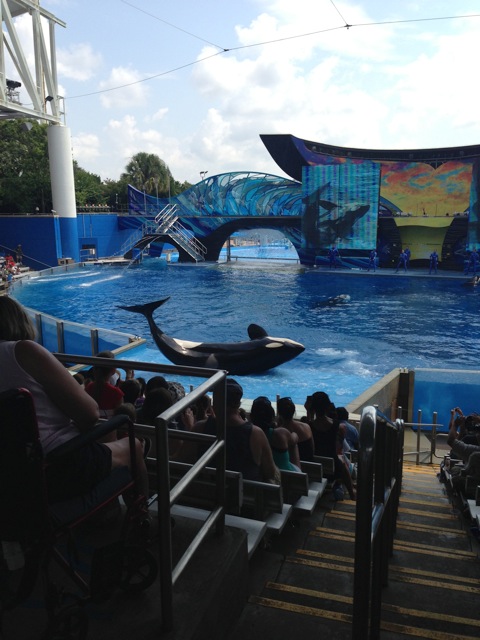 A killer whale jumps on the platform and spins around as the audience watches. (Yelena Orrelly/WUFT News)

Visitors gather outside of Shamu Stadium, where crowds arrive up to an hour before each show to reserve a seat. (Yelena Orrelly/WUFT News)

Yelena is a reporter for WUFT News who may be contacted by calling 352-392-6397 or emailing news @wuft.org
Previous Marion County Land Owner And Conservationist Practices ‘Agriculture At Its Finest’
Next UF Health Pays Millions To Federal Government